The Albemarle County Planning Commission has approved a preliminary site plan for a 212-unit apartment complex off of Rio Road near Fashion Square Mall. The developer had slightly revised the plan after concerns were raised by the Commission and residents in June.

Arden Place is a proposed “luxury” apartment complex that will be built off of Rio Road behind the Albemarle Square Shopping Center. The project was met with strong opposition by residents of the Woodbrook neighborhood at the Commission’s meeting on June 23, 2009. Residents expressed concerns that the construction of a roadway or pedestrian trail connecting Arden Place to their neighborhood would have negative effects on their community, including a decreased level of safety. 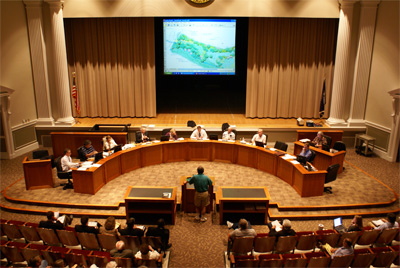 At the June meeting, residents and commissioners also expressed concern about the development’s impact on traffic on Rio Road and U.S. 29. County regulations require  two public entrances to developments over 50 units.

The developer of Arden Place, Coleway Development, amended the preliminary site plan to include a direct entrance to Rio Road in addition to an entrance connecting to Putt Putt Lane on the development’s east side. According to VDOT engineer Joel DeNunzio, a revised traffic study indicated that the development would not have as much of an impact on traffic as previously estimated.

The previous study estimated a 19-minute delay for a left turn from Putt Putt Lane onto Rio Road. The revised study accounted for gaps created from the Old Brook Road intersection and a shared left-turn lane from Putt Putt Lane which allows for a two stage gap, comparable to having a median. DeNunzio said with these measures the “levels of service are acceptable.”

At the September 8, 2009 meeting of the Planning Commission, Coleway’s attorney, Valerie Long, discussed the potential for an entrance connecting to the Carmike Theatre parking lot in the Gardens Shopping Center in lieu of the Rio Road connection.

According to DeNunzio, “making the connection [through the Carmike entrance] has some benefit, but not as a true roadway.” DeNunzio also said that the addition of the second entrance to Rio Road would not have an added benefit for improving traffic.

The Arden Place development, which was previously proposed with 206 units, will now be constructed with 212 units. In addition to the 170 base units allowed under existing zoning, the developer can build the additional units because of a 10% density bonus that comes with a commitment to preserving a portion of the woodlands area. Permission to build another 25 units is granted because Coleway is dedicating open space to the County.

The main point of contention at the June meeting was the proposed roadway connecting Arden Place with Woodbrook. This path was revised by the developer into a 10-foot wide paved asphalt path, which extends from Rio Road to the County’s Lagoon Project, adjacent to the Woodbrook neighborhood, and has connections to Albemarle Square and the Carmike Theater parking lot. The County’s Lagoon Project is an Albemarle County Water Resources capital improvement project which seeks to improve stream health through stormwater management on the 8-acre parcel. 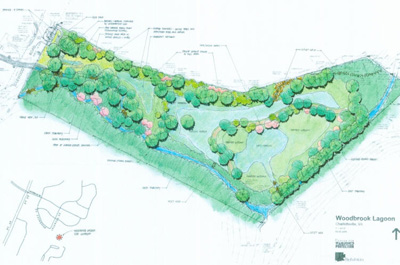 According to County Transportation Engineer Amy Pflaum, the 10-foot wide path meets the County requirement for a Class A-Type 2 standard which meets the Americans with Disabilities Act guidelines.

During the public comment period, sixteen residents from Woodbrook spoke out against the footpath proposal, expressing frustration that the developers had not removed the path from the project entirely. When one resident asked his fellow neighbors whether they believed that a 10-foot wide asphalt trail was still a roadway, many raised their hands in agreement.

One resident expressed concern that the path will lead elementary-age children to an unmonitored and unsafe area.

“The Lagoon Project is not a park,” said Woodbrook Community Association President John Gallagher “It is a small creek reconfiguration project.” With additional public access on the footpath to the Carmike Theatre parking lot, the potential for unwanted strangers walking to the Woodbrook neighborhood is also a concern for many.

After the public comment period, Commissioners discussed the parameters of the proposed footpath. Commissioner Bill Edgerton proposed that the applicant dedicate land for public benefit in lieu of constructing the pathway to Woodbrook in order to meet the open space requirement.

Commissioners approved the preliminary site plan with certain conditions. The applicant will have to dedicate additional land near the Lagoon Project for its commitment to open space and will work with County staff to determine those boundaries. Commissioners also proposed the condition that the path be narrowed to five feet, that this path will not extend north of the Carmike path connection, and that it is maintained by the developer. A new condition proposed was that the entrance to Rio Road will not be constructed if the Carmike Theatre access is constructed.

The plan will be reviewed further by the Albemarle County Board of Supervisors at a meeting to be determined, but likely in November.

12:32 – Chairman Eric Strucko asks whether path can be ADA compliant
without impervious surface

1:25:10 – Valerie Long comments that applicant would be fine with narrower trail

1:28:15 – Eric Strucko asks about the relationship of the parameters

of the path with applicant’s reception of density bonus

1:35:50 – Linda Porterfield comments on who will maintain the path

1:41:13 – Commissioner Don Franco asks what is being deeded to the County

1:44:30 – Don Franco asks whether the path can be deeded to prevent
vehicular access

1:45:23 – Eric Strucko discusses the gated element to the Carmike entrance

1:46:40 – Linda Porterfield asks whether future commercial development
next to Putt Putt would warrant a traffic light

1:52:59 – Bill Edgerton comments on removing the path to Woodbrook
neighborhood and dedicating additional land to the Lagoon Project

1:56:24 – Valerie Long comments that the applicant is willing to work
with County staff to determine boundaries for adding land for open
space requirement