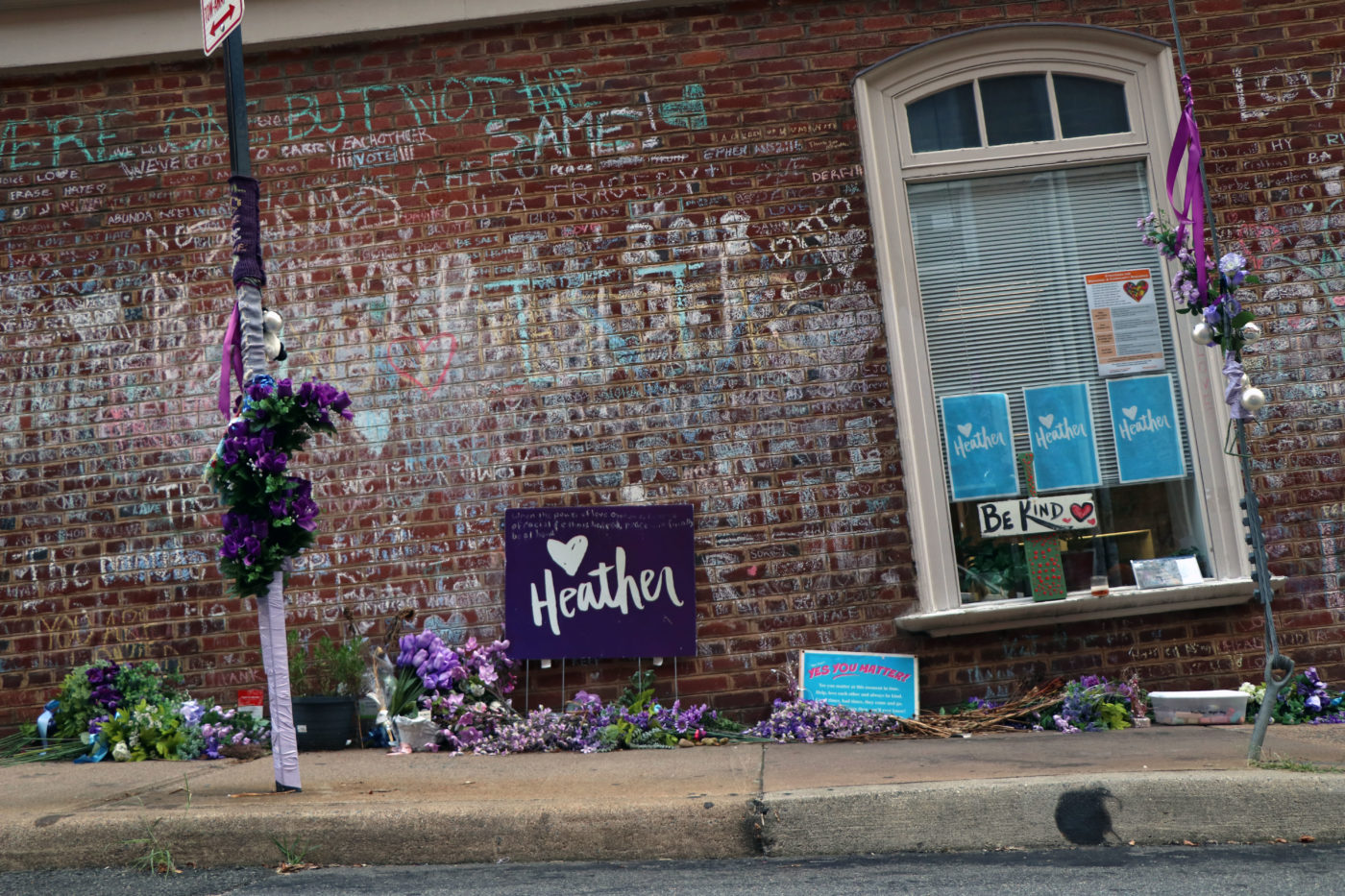 Chalk messages, signs, and flowers adorn a wall on 4th St where Heather Heyer was killed and many others were injured on Aug. 12, 2017.

When James Alex Fields Jr. attacked a crowd of counter-protesters on Aug. 12, 2017, Star Peterson was one of 35 people physically injured. She suffered broken bones in both legs, parts of her spine and a rib. Five surgeries and two years of unemployment later, she still has a long road ahead to total recovery. And she’s not alone.

The Heal Charlottesville Fund, which operates within the Charlottesville Area Community Foundation, has taken on the bulk of financial aid to victims. Ranging from medical and therapy bills to helping with rent or groceries, the fund has helped victims to certain degrees over the past two years. While it is still accepting donations, its coffers are depleting, and it may not be able to offer assistance past the end of 2019.

“It feels like people forget so quickly,” Peterson said.

Peterson explained that people often assume everything was covered by proceeds from the Concert for Charlottesville that was put on in fall 2017.

One of Peterson’s legs has metal pins in it that have caused infections and need to be removed, but her leg is not strong enough yet. Pending an upcoming scan, Peterson will have a better sense of when her next (and likely final) surgery will be. From there, she will have months of physical therapy where she will “learn how to walk again.”

The aftermath of the attack has spelled different levels of difficulty getting back to normal for various victims. Tay Washington, a single mother whose car was struck by Fields’, still needs a spinal surgery, which Peterson said will not be covered by Medicaid. Anna Malinowski, who was not physically injured during the attack but was “as close as you can get to it,” was out of work for seven months and has undergone thousands of dollars’ worth of therapy. Tyler Magill, who suffered a stroke days after being assaulted on Aug. 11 and sustaining nicked carotid artery, said he feels like he “won seven different lotteries” and that he “should not have survived.” The events of those two days in 2017, in part, inspired his wife Sena to run for a seat on the City Council.

While the Heal Charlottesville Fund was established for victims of that day, the state also operates the Virginia Victims Fund. The statewide fund cover medical expenses, dental, prescription, funeral burial, lost wages, mental health, grief counseling, moving and other crime related expenses. A Democratic Socialists of America chapter set up a GoFundMe and gave the proceeds to the National Compassion Fund, as well. With the funding available, some victims say that they have had a hard time navigating the bureaucracy.

A UVa employee, Magill was uncomfortable tapping into victims’ funds when he felt financially secure enough to pay his bills through his medical insurance provider. Similarly, Malinowski opted not to access the Heal Charlottesville Fund, preferring that the money pay for survivors’ outstanding medical bills — not her therapy. 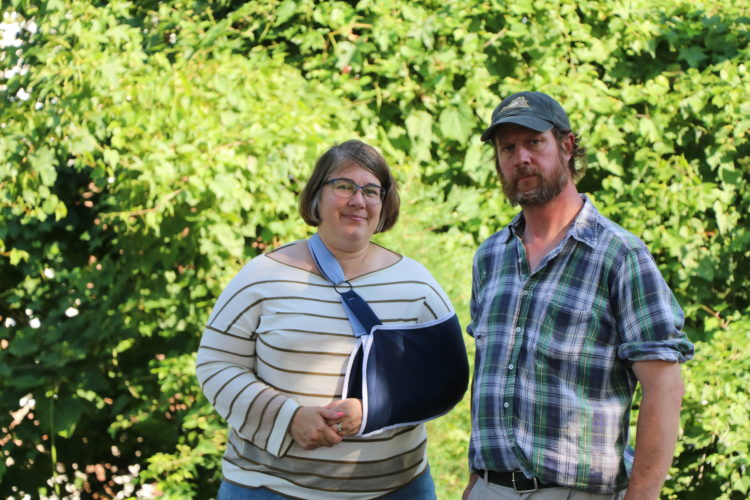 In addition to medical care for his stroke, Tyler Magill has undergone therapy since Aug. 11, 2017. Sena Magill's arm is in a sling from a dunking booth accident during a campaign event in her race for city council.

However, medical bills aren’t the only financial needs still burdening survivors. Unable to work for the last two years, Peterson said she has turned to a variety of sources to cover basic living expenses.

“If we don’t work for two years, we don’t have money to pay rent, car insurance, water, gas,” Peterson said.

The web of local, state and federal funding sources available to those injured in August 2017 can be difficult to navigate, so Partner for Mental Health hired Matthew Christensen as a systems navigator to help roughly 15 survivors “get through the bureaucracy.”

While Christensen described the Heal Charlottesville Fund as having done a “very good job” stretching its resources to help survivors, he said the Virginia Victims Fund — the state agency created to financially aid victims of crime — has been uncooperative. Christensen expressed frustration with the fund’s requirements.

“They want to claim that in order to pay out anything, you have to exhaust every possible charity you can find,” Christenson said. “The Virginia Victims Fund exists in order to address the need that is created by crime, and the fact that other charities also stepped in is, in my opinion, gravy.”

Kassandra Bullock, director of the Virginia Victims Fund, affirmed in an interview with Charlottesville Tomorrow that VVF is statewide agency and statutorily a payer of last resort. To date, the VVF has awarded $30,448 dollars to survivors of August 2017.

On a national level, the National Compassion Fund awards one-time payments to victims of mass crime. The Compassion Fund began disbursing payments to survivors receiving funds from the GoFundMe campaign started by the Democratic Socialists of America.

At first, it seemed that the funds would go to the Crime Victims Fund — a national agency that recompenses victims of crime. The possibility made some victims uneasy, as the fund requires claimants to file a police report to prove eligibility.

Although initially reluctant to access local funds, Magill and Malinowski eventually received small dollar amounts from the Compassion Fund. The $1,000 check Malinowski received in August 2018 does little to cover what she estimates to be “tens of thousands” in psychological treatment bills.

Despite funds available at local, state, and national levels, survivors made it clear that they are still struggling. Dwindling funds at the Heal Charlottesville Fund mean some survivors will have to turn to longer-term funding sources, like disability benefits.

“[The Heal Charlottesville Fund] told me that they don’t have enough money to guarantee help past December,” Peterson said. “I definitely won’t be able to go back to work by then because I have another surgery.” 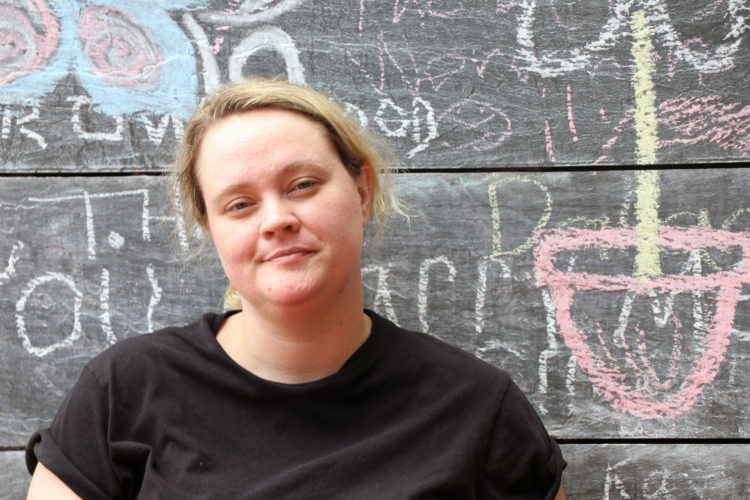 Aug. 12 survivor Anna Malinowski stands in front of the Freedom of Speech Wall.

A call for McAuliffe’s contribution

At a Washington, D.C., reading for former Gov. Terry McAuliffe’s book, “Beyond Charlottesville: Taking A Stand Against White Nationalism,” Peterson and Malinowski were among a group of residents to speak during open comment period. Incensed that McAuliffe planned to donate proceeds from the book to the Virginia State Police Association, they suggested he donate to the Heal Charlottesville Fund.

In addition to the police association, McAuliffe had approached Susan Bro to donate to the Heather Heyer Foundation, which was founded in her slain daughter’s name.

“He called me from an anonymous number to talk about the book,” Bro said in an email to Charlottesville Tomorrow. “When I asked if he would consider donating to the Heal fund, he said he had been wanting to, but could not find their information.  He said he would call back with his contact information. He did not call back.”

Due to reported inaccuracies within the book as well, survivors have taken offense to the book.

“It was so egregiously exploitative,” Malinowski said. “We decided to go ask him some pointed questions and see how he would respond.”

Malinowski says she also takes issue with how McAuliffe blamed others in his book but did not reflect on himself. Malinowski and Peterson do not think that funding should be directed to the state police.

“The Virginia State Police were negligent and did not help us at all that day,” Malinowski said. “The way that they stood by on that day is the reason why many people were injured and traumatized.”

Former U.S. Attorney Tim Heaphy was hired to investigate after the events of August 2017. In what is referred to as the “Heaphy Report,” various levels of government were criticized for preparation and/or response, to include law enforcement.

This week the widows of Troopers Berke M.M. Bates and H. Jay Cullen have filed lawsuits seeking $50 million each. Their husbands were conducting patrol from a helicopter when it crashed and are cited among activist and paralegal Heather Heyer, who was killed in the car attack, as the deceased on Aug. 12, 2017.

During the event, there also were calls for McAuliffe to meet with survivors to better understand their needs and resonating impact from Aug. 11 and 12.

“This is not just about outstanding medical bills,” Malinowski said. “This is about needing to live.”

The details of him meeting with survivors remains unclear at the time of this publication.

In an interview with WAMU, McAuliffe stated that he had reached out to CACF to talk about donating and that he had been told there was actually a surplus of funding. However, a spokesperson with CACF said otherwise.

As of now, McAuliffe does plan to donate after Bro connected him with a link. Bro also confirmed an email exchange with a member of McAuliffe’s team that confirmed a link to the fund had been passed on to him.

After multiple attempts, McAuliffe could not be reached for comment.

UPDATE: A spokesperson for McAuliffe has since said “we are all working together constructively to help the fallen heroes of Virginia state police, the Heather Heyer Foundation, and survivors of the August 11 and August 12 violence.”