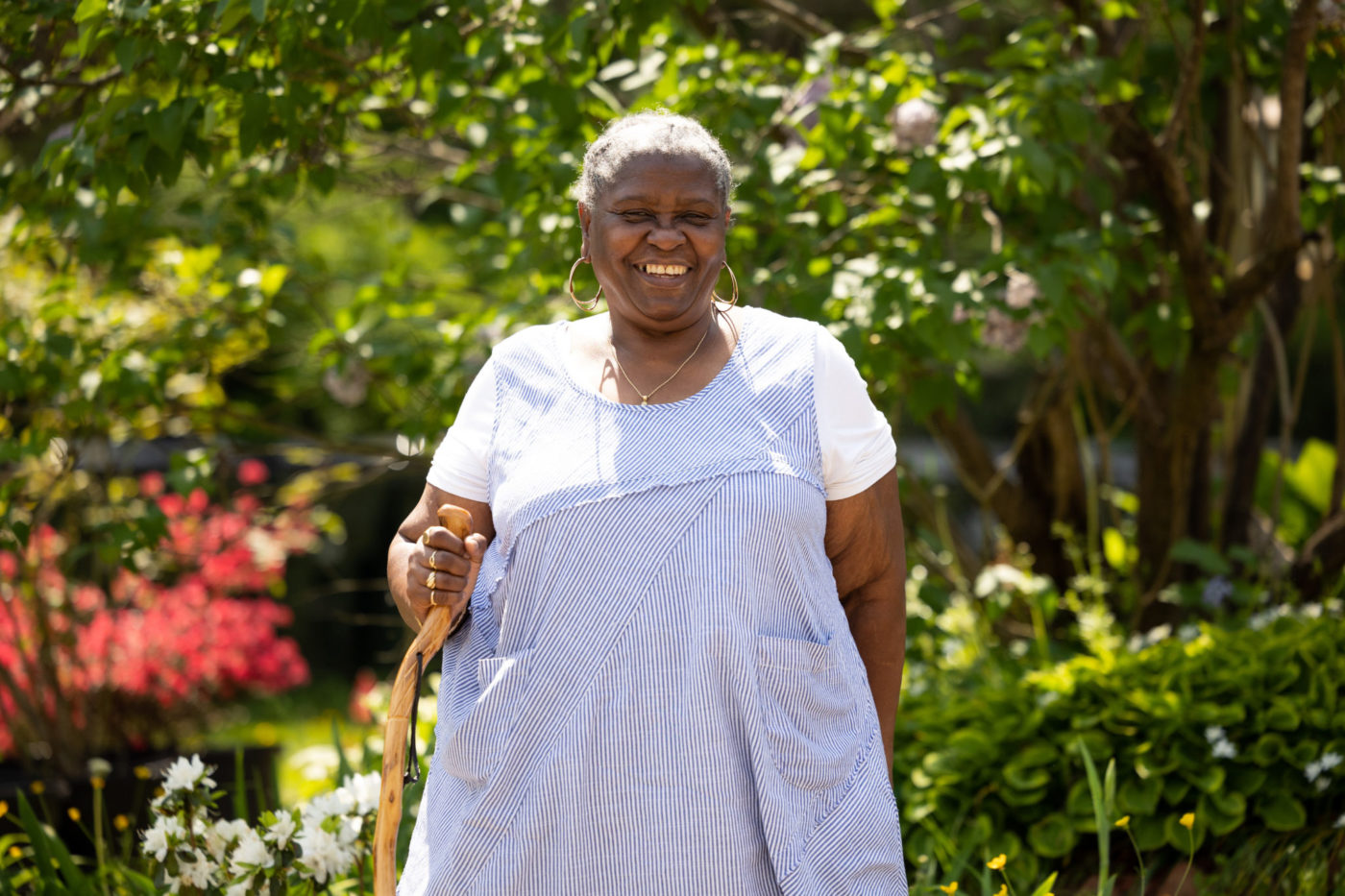 Joy Johnson, co-founder and president of the board of PHAR, stands in front of the Westhaven community's oldest lilac tree hours before receiving the Dolbeare Lifetime Service Award from the National Low Income Housing Coalition on April 28. Mike Kropf/Charlottesville Tomorrow

This past Wednesday morning was just like any other for Ms. Joy Johnson. She sat in her office inside the Westhaven Nursing Clinic on Hardy Drive as the neighborhood’s oldest lilac tree, some irises and azalea bushes bloomed across the street.

“That lilac tree smells amazing,” she kept saying as she looked out the window, mentioning, too, that even though it’s hot outside (too hot for April), she wasn’t quite ready to turn on the air conditioning.

Throughout the morning, she sat at her computer, testing out how to make copies on a new printer, answering emails, phone calls and text messages, all part of her role as president of the board of the Public Housing Association of Residents — an organization Johnson co-founded in 1998.

Folks stopped in to say hello and to offer her congratulations, consistently reminding Johnson that this was not just a typical Wednesday morning. Later that day, she would receive the Cushing Dolbeare Lifetime Service Award from the National Low Income Housing Coalition for her decades of advocacy on the behalf of public housing and low-income residents in the Charlottesville area. The Legal Aid Justice Center even hung up a huge congratulations banner for her, one big enough for everyone driving along Preston Avenue to see. (Johnson also had to deal with a slew of reporters, including this one, asking for her precious time.)

Johnson sat down with Charlottesville Tomorrow for a look back on her work so far. This is part one of our interview, which has been lightly edited for clarity. Part two, a conversation between Johnson and PHAR Executive Director Shelby Edwards on the future of the organization, will be posted tomorrow.

Charlottesville Tomorrow: Ms. Joy, you moved to Westhaven in 1983, a single mom of four kids. What was Westhaven like then?

Joy Johnson: Westhaven then was more of a village, I would say. There were family members who lived over here and you had the seniors, and they were like the big mamas. You had older residents who were watching kids, because that’s how they made their extra money, they babysat. Even if they wasn’t getting money, they babysat for the whole neighborhood because they either had food or goodies, or that’s where the kids hang out. If you couldn’t find your child, you pretty much knew, they’re at so-and-so’s house. And you’d just go around and check, and they’d say, “they’re over here!” That kind of thing.

You had a lot of services here. They would take kids on bus trips; they would take kids to see plays. They would take the whole family. And you had Parks & Rec, Mr. Rudolph Carey. He’d cook in here [the clinic] for the kids, they’d play all kinds of games. If he wasn’t doing things in here, he would go up in the park and he would put his music on and the kids would play games, kickball. We didn’t have fences then. We didn’t have any fence around us, it was open. And through that, even though we had services, even though it was like a village, we still had activities that kind of deterred people from [other neighborhoods] letting their kids come over and play with our kids. But I don’t care what neighborhood you go in, you’re gonna find something, right? It’s just that houses are being built so big now that people have basements they can go in. We don’t have basements to go in [in Westhaven], so our social issues flow outside. In the rich people’s neighborhood, or in the upper-class people neighborhood, it flows over into their basements; if they get mad with a brother or a sister, they fight it out in the basement and you never hear it outside.

When I moved here, the seniors were the ones doing all of the organizing, the Westhaven Tenants’ Association and all that. It was driven by the seniors. Back then, the tenants’ association was issue-specific, and when you solved the issue, people went on about their business. It wasn’t a continuous thing. They organized around maintenance stuff.

How would you describe Westhaven now? What’s changed, what’s the same?

There is separation, most definitely. Most of the big mamas have passed away, so that tradition of being a big mama is far and few. There’s still a few people that live here that are the big mamas of the world.

And the services. The abundance of services that was here when I moved here is not here anymore. It’s very far. There’s nothing for the kids to do. Bobby Green, he did birthday dinners, senior trips, gospel singing. He would take the seniors out to eat. Nobody does that anymore. It’s very individual now, it’s very separated. If you look geographically at our public housing, everybody’s kin to one another some kind of way. But if you’re looking specifically at Westhaven, you don’t have the abundance of family members living here like they used to. It would be that you’d have a mama living down here, but a daughter living over there, and probably got an uncle living there, but it’s not like that now. Because you have people that are coming from the counties and places like that. It’s pretty different. It’s the 21st century, so, I don’t know if that tells you anything.

The Westhaven Tenants’ Association was focused on Westhaven, but then you established a broader, citywide organization, the Public Housing Association of Residents (PHAR), in 1998. Why?

We had individual tenants’ associations at Westhaven, South First Street, Sixth Street, Crescent Halls and I want to say Michie Drive or Riverside, one of ’em. But that changed with time, because people move, people die and then it narrowed down to just three: Westhaven, Crescent Halls and Sixth Street. And … Sixth Street, that one kind of died out, so then it was just Westhaven and Crescent Halls [which houses seniors]. And when we would go to City Council meetings and bring up anything, council wanted to know whether or not we represent all public housing residents, or if we were just speaking for ourselves. And the regulation says we can either be a site-based organization, or we can be citywide. And since numbers are powerful and, a citywide organization is much more likely to keep people, we decided that we would go to a citywide organization. After applying for a grant with The Center for Community Change, and for some other grants, … Karen Waters-Wickes started it, but then she left, and Ben Thacker Wartney took over, and he helped us to file all the papers and stuff so that we could get our 501(c)(3) status, and in 1998, we became a citywide organization.

Why organize around housing?

Well, there’s a statute that came out of Congress that says public housing residents have the right to organize. It spells out, in Regulation 24 CFR Part 964, what “organize” means and what you can be involved with. Once we understood that, we decided this is what we’re gonna do. We started out being about change in policy because some of the policies were bad. And then the more we dig into stuff and things were happening, and we start learning more about things, we decide that we was just going to stick with housing, even though all of the other connections, it’s connected, that we was going to stick with housing and whoever does migrant work, we let them do it. Whoever do school, we let them do it. We see it all, but we can’t do it all.

And housing is so important. A home …

PHAR has done a lot for local public housing and low-income residents. What are some of your proudest accomplishments?

When PHAR started out, the five city councilors were the board of commissioners [of the Charlottesville Housing and Redevelopment Authority]. And PHAR changed that ordinance to be one city councilor, two current public housing residents, and the rest of them would be private citizens. We changed that. We were able to work on eviction prevention policy, parking policy. 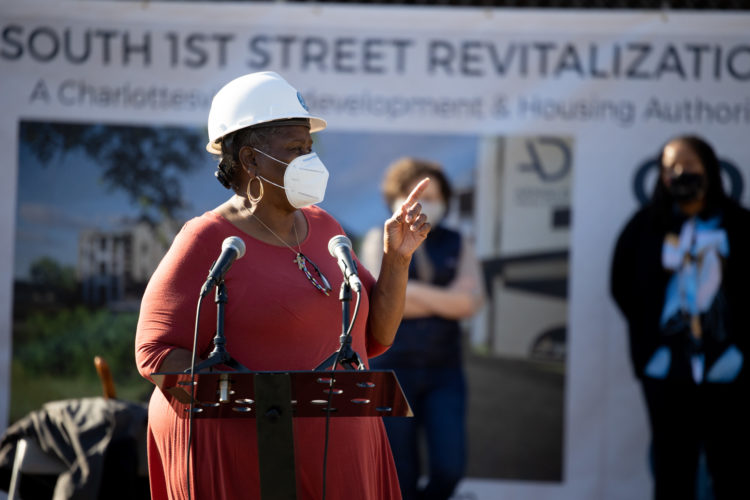 Public Housing Association of Residents chair Joy Johnson speaks at the groundbreaking of the redevelopment of South First Street.

One of my biggest, proudest moments is when we went to a conference, learned about Earned Income Disregard, and got Legal Aid [Justice Center] to research. We found that over 66 people were due monies back, thousands of dollars that residents got back. [Note: A form on the PHAR website explains that, “Earned Income Disregard is a federal regulation, 24CFR 960.255, that requires the Housing Authority to not count increased income toward your rent for twelve months if someone has been unemployed or under-employed for a year or more and then gets re-employed. During the second 12-month period, the housing authority would not count 50% of the increased earning.”]

The next big thing that I’m proud of is that, working with Legal Aid, we were able to sue the Housing Authority because they were over-charging people for utilities. Those are some of my proudest moments. The most recent one is rehabbing Crescent Halls and building 63 new units [at South First Street].

It’s about time! The city has been promising these people for the last 20-plus years that something new was going to happen, something new was going to happen. So, after Aug. 11 and 12, 2017, someone got pissed with the city and said to us, “What can we do to help?” Audrey [Oliver, PHAR treasurer] and I, we started attending meetings with them, and they basically said, “Hey, this is what we wanted to do,” and we said, “We’ll take it.” And then we started planning and planning so that nobody can come back and say, “I’m gonna sue you because you did A, B, C, and D,” or whatever.

With resident-led redevelopment, do you feel as though you’ve had the say that you’ve wanted to have?

Look, it’s not perfect. It could be better. We’re now realizing that there are some things we missed. Going forward, we’re going to make sure we’re on top of that. Overall, I’m excited and pleased. I’m a little nervous, because now I gotta wait for the finished product!

But for now, you’re getting this big award…

Yeah…you know, some people say I don’t look excited, but what do y’all want me to do?!