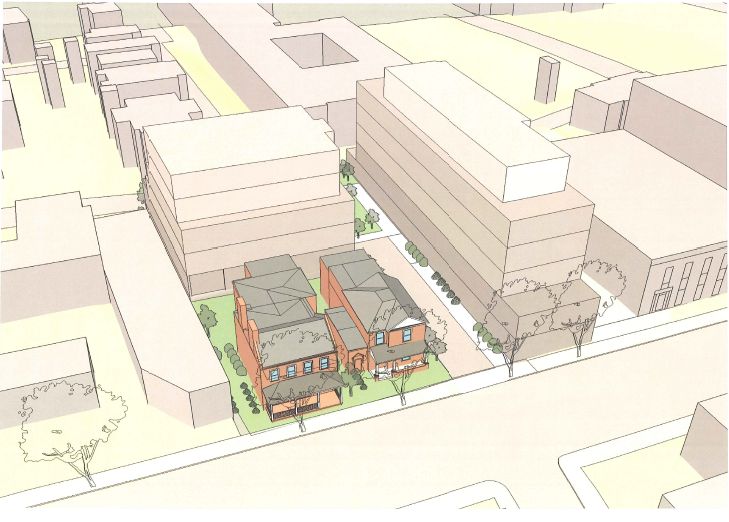 Depiction of the massing for the Atlantic building around two historic home on W. Main

When the Charlottesville Board of Architectural Review considers architect Bill Atwood’s design for a new mixed-use building in the 500 block of West Main Street next month, the appointed body will be the last stop before the project can move forward.

“This is a by-right plan, meaning that the heights and the set-backs and everything he is proposing to do is allowed in the zoning ordinance,” said Mary Joy Scala, the city’s preservation planner. “He does not need City Council approval.”

But residents of the Starr Hill neighborhood pleaded with the BAR at a hearing last week to do what it could to reduce the impact the building will have on traffic on their narrow streets.

“One of the challenges we have is that this is the one audience that we have,” said Brad Worrell, a resident of West Main. “This may be one of the only places where we get a voice.”

The Atlantic will consist of a pair of five-story buildings that will be constructed around two historic buildings protected by city guidelines.

Atwood has reduced the size of the project following two previous reviews by the BAR earlier this year. One of the changes is to include a walkway to connect West Main with Commerce Street to provide pedestrian connectivity to the nearby Jefferson School City Center.

In all, the project will have about 144 parking spaces, fewer than Atwood had originally proposed. However, he said the public and businesses would benefit from the additional spaces to support West Main Street. The current plans show access to most of the parking garage via Commerce Street.

“We are looking for 30 to 40 parking spaces to be available [to the public],” Atwood said.

At last week’s meeting, Atwood was seeking the BAR’s approval of the project’s “massing” — the size and shape of the building. The public had the chance to weigh in, as well.

“We are really afraid of the traffic,” said Pat Edwards, 66, who said she has lived in the neighborhood since she was 5 years old. “This is a real critical issue for us as a neighborhood and I would appreciate anything anybody could do to protect us.”

Ken Wooten, who co-owns Orzo Kitchen & Wine Bar on West Main, said he supports the Atlantic project because it will provide customers for his business.

“West Main is starved for parking,” he said. “There are so many restaurants that would like to be open for lunch but they can’t because there is not enough parking.”

However, the executive director of the African American Heritage Center at the Jefferson School questioned the number of parking spaces that would be built.

“I’m not completely sure that the notion of parking should take precedence over the idea of neighborhood development,” said Andrea Douglas.

Douglas said she was concerned the project would treat Commerce Street like an alley, as opposed to a neighborhood street.

Worrell said he was not opposed to a mixed-use building, but that the size of the structure is a mismatch with the rest of his neighborhood. He compared the project to the adjacent Main Street Annex, which consists of renovated garages and other buildings that are no more than two stories in height.

“We still see a very large building looming over our neighborhood,” Worrell said.

Atwood presented the BAR with drawings depicting the massing, but opted to return in October with a full design of the building.

BAR member Brian Hogg said the project had improved since he first saw it in May, but he voted against massing approval because he wanted to see the design, as well.

“Design can affect your perception of massing,” Hogg said. “We would be approving a bunch of boxes and then we would be asked to approve a design for a slipcover for those boxes.”

However, Hogg was in the minority and Atwood’s request was granted by a 5-3 vote, with Candace DeLoach and Melanie Miler joining Hogg in voting no.

“I don’t have a good handle on the traffic,” Graves said. “At the end of the day, there’s going to be a large building that’s going to back up to a residential neighborhood. I don’t know that it’s in our purview to stop that from happening.”

Atwood will need to return to the BAR to approve demolition of two buildings on Commerce Street and to get a certificate of appropriateness for the design. The buildings currently house a barber shop and a futon store.

The architect said a traffic study will be completed by the time the BAR meets again and possibly would inform the best site to place the parking garage entrance.

Later this fall, the City Council will be presented with the recommendations of a $340,000 study of West Main Street that will recommend new zoning districts for the corridor in addition to streetscape improvements.