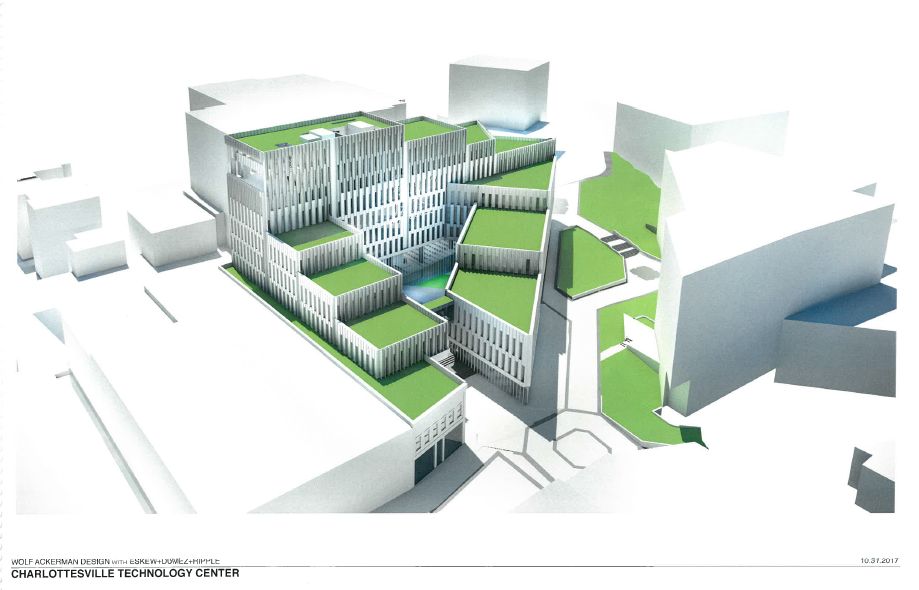 The Charlottesville Board of Architectural Review has granted a preliminary design approval for a building that will replace the Main Street Arena on the Downtown Mall.

However, the final height of the triangular Charlottesville Technology Center above Water Street could be in question as the Charlottesville City Council considers a zoning change that would alter the way maximum height is calculated.

“The developers decided to build a by-right structure so no special use permit is required,” said Mary Joy Scala, the city’s historic preservation planner. “The structure’s main mass is found on Water Street, with six stories plus mechanical equipment plus a rooftop.”

The Planning Commission recommended earlier this month that the city eliminate a provision that allows for maximum building height to be calculated by averaging all of a building’s walls. In this case, that would permit the building to rise over a hundred feet above Water Street.

“That drawing has been approved by zoning and the intent is that the BAR’s approval is consistent with the current zoning regulations,” Scala said.

Existing zoning allows for a height of 70 feet on Water Street without a special use permit and Scala said that exceeding that height is possible under existing zoning because of the averaging provision.

City Council is expected to vote on the rezoning on Dec. 4.

Taliaferro Junction LLC and Jaffray Woodriff, the developer of the Charlottesville Technology Center and owner of the property, are hoping to lock in the height ahead of any changes to the ordinance.

“We are here today with the hopes of gaining the approvals we need for a preliminary site plan,” said architect Fred Wolf. “We are hopeful to get that in advance of the zoning ordinance changing.”

Wolf said the developers had every reason to believe that the project could be built as submitted.

“We did not design this to work with the way you calculate height,” Wolf said. “We designed this to be responsive to the context [of the land].”

Scala said because a preliminary site plan has not been approved, the project could need to be configured to adjust to the new zoning code if Council decides to follow the Planning Commission’s recommendation.

The BAR last saw the Charlottesville Technology Center project in August for a preliminary discussion. Under the proposal, 218 West Water Street would be preserved, but the buildings that house the Main Street Arena and Escafe would be demolished.

The building as it faces the Mall across from the Omni would gradually decrease in size towards the east in a series of terraces. This area is the proposed location for a new park to commemorate Vinegar Hill.

“The applicant previously offered to contribute to the design of Vinegar Hill Park but nothing has been submitted yet,” Scala said.

Wolf said the developer is still interested in participating in the park and is starting to revisit what that might be.

“It’s not necessarily part of this project, but it remains something we are strongly interested in,” Wolf said.

There would be other uses in addition to office space.

“We have retail spaces on the ground floor, [two] lobby spaces and there’s an auditorium space parallel to Water Street that is going to serve building occupants but can also function as a flexible space that can serve things like the Festival of the Book,” Wolf said.

The building will also include laboratory spaces for research and development.

The project had the support of the several BAR members who were present Tuesday.

“I think the massing overall is really good and is definitely geared to the most important part which is the Mall,” said BAR Chair Melanie Miller. However, she questioned some of the material used in the renderings.

Wolf said the facades included in the drawings are meant for demonstration purposes and will be updated before the project comes back to the BAR for final approval.

BAR member Carl Schwarz noted that the elevation on Water Street would be very tall. He voted against the massing.

“I wish you could find a way to start whittling away at that mass so it’s just not this sheer plain straight up [for a hundred feet] that you’ll be looking at from a five-foot wide sidewalk,” Schwarz said.

“I think it’s very deferential to the scale of the Downtown Mall,” Balut said. “You’re keeping the massing away from the Mall very successfully.”

BAR members Emma Ernst and Whit Graves were not present, nor was Planning Commissioner Corey Clayborne.

The BAR’s certificate of appropriateness is contingent on whether the zoning issues can be resolved.

The BAR also weighed in on a special use permit that will be required for a revised version of developer Keith Woodard’s West2nd project. Citing rising construction costs, Woodard is seeking to increase the number of residential units from 68 to 97. That requires City Council to grant a permit for additional density.

After an hour and a half of discussion, the BAR approved a resolution that said the additional density would not have an adverse impact on the downtown architectural design control district. However, they stated they wanted to review the additional height as a new design is developed.