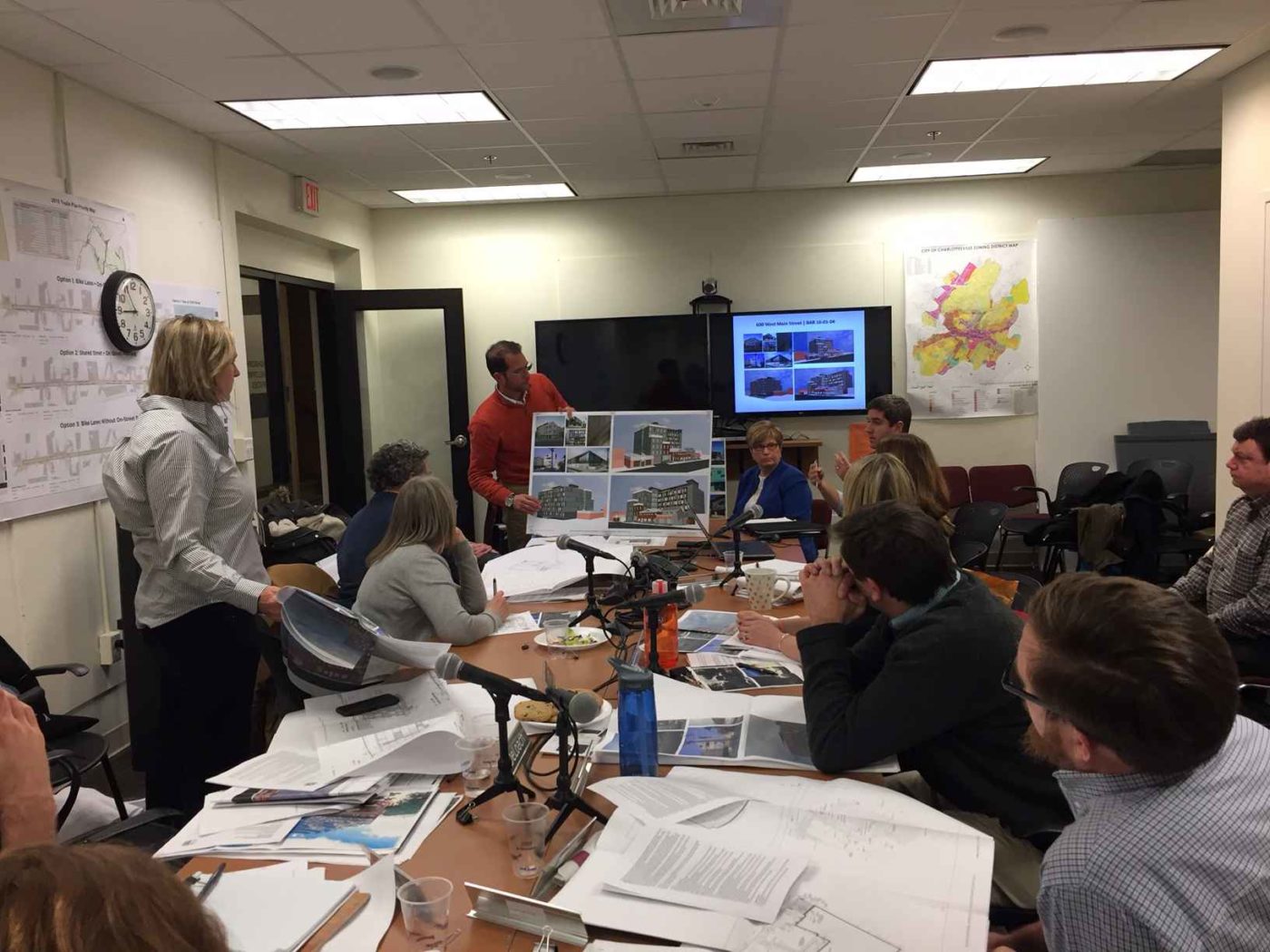 The Charlottesville Board of Architectural Review has granted permission for a developer to remove portions of two historic buildings on West Main, but members want more information before approving the size and shape of a new six-story building there.

“This just seems a little bit too much of maxing [the building’s size] out at all the edges,” said BAR Chairwoman Melanie Miller. “Even though that’s okay under zoning, there’s going to have to be some chopping back.”

In November, BAR members had said they would support neither a complete demolition of 600 W. Main St. nor a partial demolition of the building that houses the Blue Moon Diner next door.

“The BAR was not in favor of that demolition because of their age and because they provide scale and relate to other historic buildings nearby,” said Mary Joy Scala, the city’s historic preservation planner.

In response, architects working for developer Jeff Levien created a plan that incorporates the two buildings into a new structure that would rise above West Main Street.

“The new building will contain ground-floor retail, rental apartments and a residents’ lounge on the appurtenance level,” Scala said.

Under plans shown Tuesday to the BAR, there would be a 35-foot-tall street wall on West Main and the upper three stories would be stepped back. There will be a courtyard space between the existing buildings and the new structures.

On Tuesday, the BAR voted unanimously to allow removal of a portion of the rear of the Blue Moon Diner building and the removal of a second-floor addition to 600 W. Main St. next door. They agreed these portions did not contribute to the historic character of the buildings.

However, several BAR members said the proposal they saw is out of scale with the area.

“The height on West Main Street along that area is mostly four stories maximum,” said Carl Schwarz. “I feel like this building is going to be very big for this one half of West Main Street.”

Architect Jeff Dreyfuss is working for Levien on the project. He said the proposed zoning for West Main Street will allow for four-story buildings in the future.

“I would caution us against building for only what’s there right now,” Dreyfuss said. “The ABC store is not going to be there forever, and I’d rather we set the tone for what comes next.”

Dreyfuss and the rest of Levien’s team will consult further with the BAR at a future meeting.

The BAR also approved changes to the Market Plaza project on Water Street. Developer Keith Woodard and architect Gregory Powe were selected by City Council to develop a city-owned parking lot site in 2014. Their project will be an L-shaped, nine-story building that will feature apartments, offices and retail space.

The project was last before the BAR in September when the developers sought approval of a lawn feature to replace a fountain submitted in the original plan for the plaza.

“They’ve decided that they prefer the water feature, so they’re back to that again,” Scala said.

Powe said the water would be treated because health officials consider it a pool.

“It’s really just an urban park that’s focused around the fountain and we hope that kids of all ages will be splashing away,” Powe said.

In response to a question of whether the plaza would attract homeless people, Powe said the city police will be allowed to patrol the area even though it is a private space. He also said there would be security cameras everywhere.

“We hope that plaza is such a busy and active place that it’s not going to be a place for loiter-ing,” Powe said.

Council already has approved sale of the land as well as a lease agreement for the plaza. The city Parks and Recreation Department will operate the City Market for at least one day a week but have an option to add a second day.

Powe said he is hopeful that work can begin soon to place existing utilities underground.