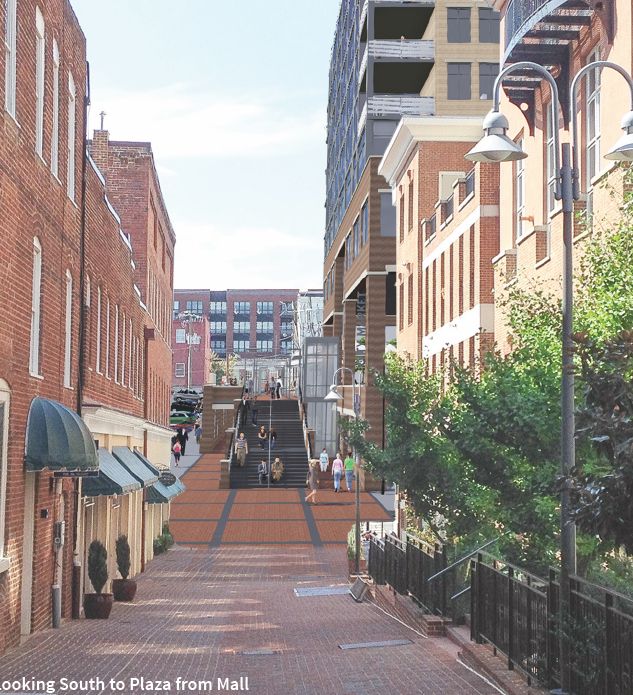 The Charlottesville Board of Architectural Review has approved both the nine-story Market Plaza building for downtown and a six-story apartment complex at 1000 W. Main St.

The certificates of appropriateness approved by the panel likely mark the last time a public body will review either project, meaning both are one step closer to construction.

“We’re looking for an October or November start for construction with a two-year construction period,” said Gregory Powe, an architect and one of the developers of Market Plaza. Woodard Properties is the other.

The City Council selected the Market Plaza concept in July following a request for proposals to develop the City Market lot. The L-shaped building will feature a mix of office, residential and retail space, as well as a permanent home for the market in a public plaza.

The project also includes a private parking lot that will be purchased by Woodard Properties.

At a recent BAR meeting, Powe had seven specific changes that had been made since the project’s last appearance before the group. These included brick colors, placement of an elevator between Water Street and the Plaza Level and awnings that will permanently rise above the market stalls.

While the BAR approved most of the details, it will still continue to review the project and might need to hold one more meeting for Market Plaza.

“There may be further refinements such as to the brick paving,” said Mary Joy Scala, the city’s historic-preservation planner. “The BAR wants to be informed of any refinements.”

The developers also still need to buy the lot from the city.

“We’re finalizing negotiations with the city on the transaction to purchase the property,” Powe said. “This is complex because it also addresses public access to the plaza, who will maintain it and who is going to operate it.”

In addition to approving the sale of the lot, the council will need to agree to permanently close First Street to vehicular traffic. Powe said he hopes the council will vote in the next four to six weeks to approve the sale.

When finished, Powe said, the concept is to extend the Downtown Mall experience into the Plaza by using similar brick pavers on the then-pedestrian-only street.

Market Plaza had the support of one resident who spoke during the meeting’s public comment period.

“Even though I am not a fan of massive buildings, I am a fan of density, and I think if we’re going to have a building of this scale, I think this is a pretty good-looking one,” said Rebecca Quinn.

Powe said there has been great interest from firms that want to rent parts of the 50,000 square feet of office space.

“There’s a lot of demand for Class A office space downtown,” he said.

Powe said interior design of the 69 condominiums is almost completed and that the units will begin to be marketed this fall.

In anticipation of construction, the City Market has relocated to the surface parking lot that Woodard Properties is renting from the Charlottesville Parking Center.

Powe said he hopes to develop the surface lot as a second phase of Market Plaza. Planning for redevelopment of the lot will be informed by how the market reacts to the new building.

“If our office space leases up before we begin to break ground, that would suggest that maybe phase two would have more office space,” Powe said. “The future of the Landmark Hotel also has a lot to do with our building. If that [remains] a boutique hotel, then we wouldn’t consider a hotel.”

The BAR also approved 1000 W. Main St., which will have 342 bedrooms, as well as commercial space to support residents. The building, which is also L-shaped, will have frontage on both West Main and Roosevelt Brown Boulevard.

Dan Hrankowsy, design director for CA Student Living, said construction is scheduled to begin in May, with an anticipated completion date of August 2016.

Both projects will require the city to approve a site plan before a building permit can be issued.