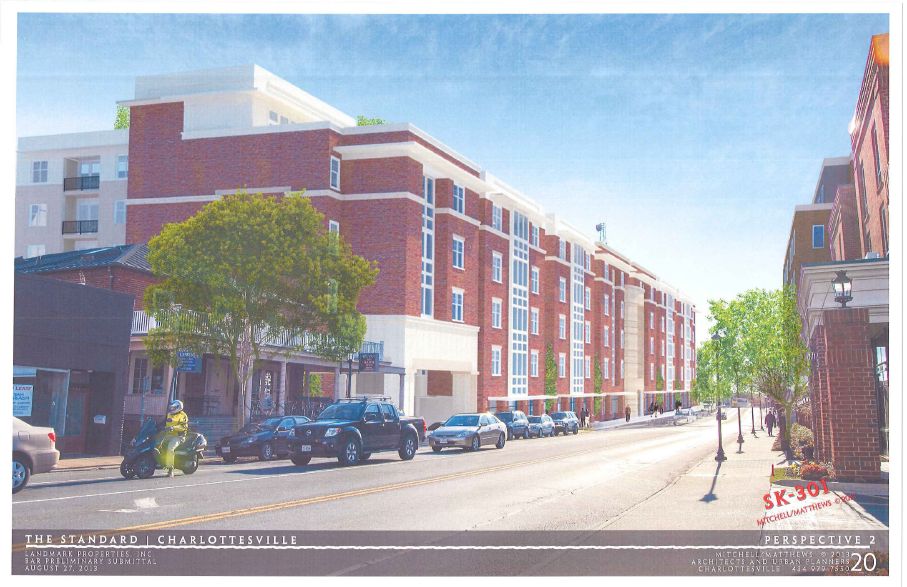 Members of Charlottesville’s Board of Architectural Review said a proposed student housing project on West Main Street would have an “adverse impact’ on the surrounding architectural design control district.

Planning for the 189-unit building, “The Standard,” comes as construction of a similar student apartment housing complex is already underway across the street.

“I am concerned that [West Main] is becoming sort of a schizophrenic streetscape,” said William Adams, BAR chairman. “You’ll have not one project but two projects that are completely out of scale with what was at one time a small town.”

The BAR’s recommendation last week came following a rare joint meeting with the Planning Commission to discuss the special use permit required for additional height and density.

However, the BAR also indicated a “certificate of appropriateness” could be issued if developer Landmark Properties considers changes to reduce the scale of the project.

“This project is still a work in progress,” said John Matthews, architect for the project. “There are a lot of hurdles to overcome, and the BAR is just one of them.”

Matthews said his design team identified seven areas to work on following the Planning Commission’s discussion earlier in September. For instance, the height of the building’s north side has been dropped by one story to reduce the impact on Westhaven, a 126-unit public housing site run by the Charlottesville Redevelopment and Housing Authority.

Dan Rosensweig, Planning Commission chairman, said he would not support the permit unless there were pedestrian connections to Westhaven.

Matthews said there is one pedestrian connection in the new plan filed with the city last week, but the final decision will rest with Westhaven residents.

“Sometimes neighborhoods don’t want people going into their neighborhoods,” he said. “When we meet with the neighborhood, we will ask them how they feel.”

The zoning for the property requires that the ground floor be reserved for commercial uses, and at least 5,000 square feet be used for shops or other uses not related to managing the property.

Michael Osteen, who serves on both the Planning Commission and the BAR, said leasing offices could not qualify as mixed use under the city’s zoning laws.

“I would love to see convenience stores, pharmacies, newsstands, barber shops, laundromats, drycleaners, delis, coffee shops, and other things the whole neighborhood could use,” he said.

“If we’re talking about West Main as a retail corridor, clubhouse and leasing offices strike me a seriously un-dynamic use that could go anywhere in the building,”  Brian Hogg said.

In August, the BAR approved a demolition permit for Republic Plaza, a building constructed in 1988 that will make way for the Standard.

Hogg, a historic preservation planner at the University of Virginia, said he had a hard time evaluating the Standard in a historic context  because he said West Main has always been in flux.

The BAR said the project’s “adverse impacts” on the West Main historic district could be mitigated if certain design principles are applied — reductions in the number of units, the number of parking spaces, and the massing of the structure.

Matthews said the Standard and the Flats at West Village are the first of a new generation of buildings that will define the future of West Main.

“These buildings coming up before you, the very first ones, are going to the most difficult because they seem initially out of place,” Matthews said.

The Planning Commission and City Council will review the project’s special use permit request next month.