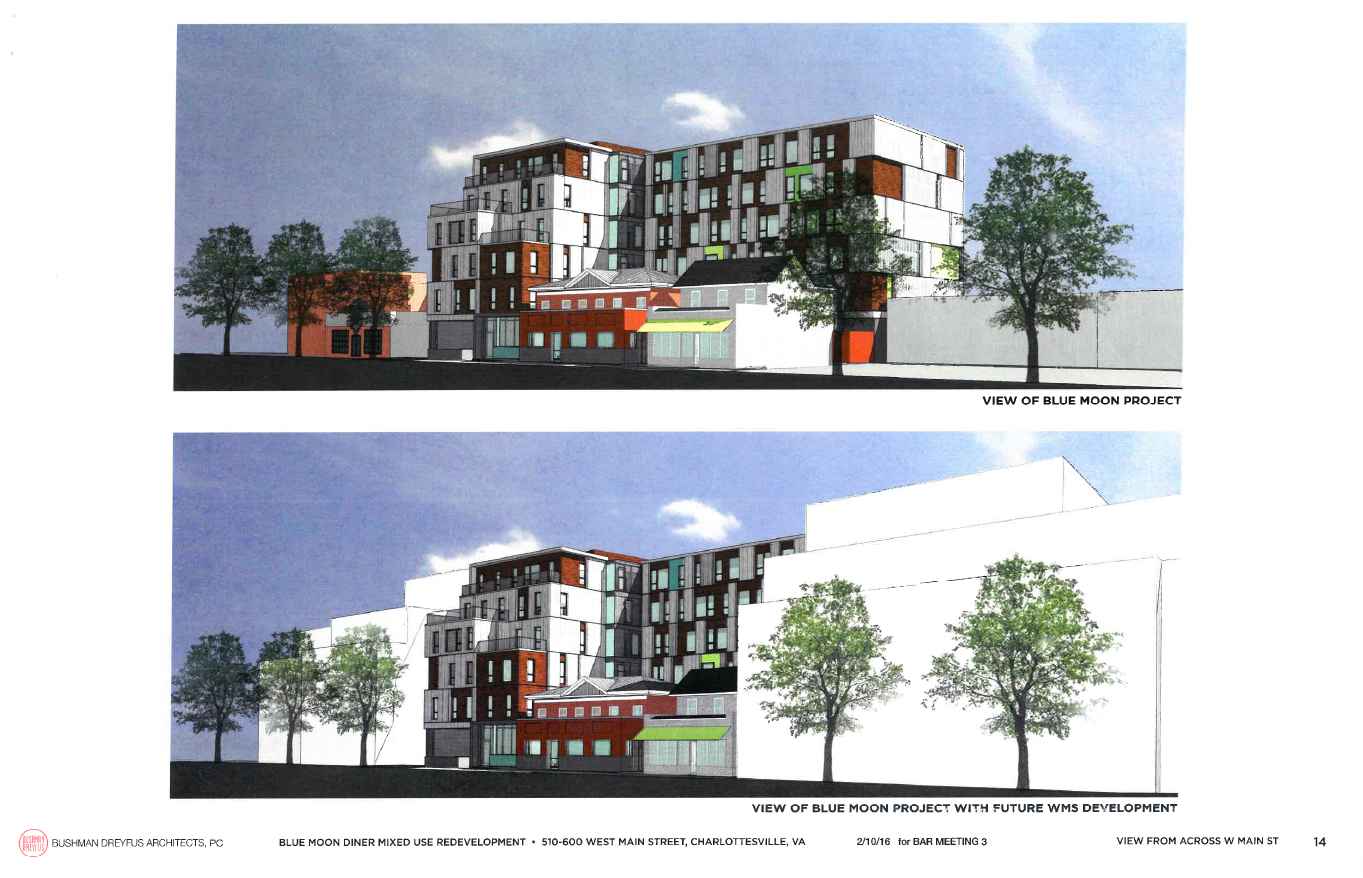 The Charlottesville Board of Architectural Review considered four West Main projects Wednesday, including a new design for a building behind the Blue Moon Diner.

The panel approved a certificate of appropriateness for the massing of developer Jeffrey Levien’s Blue Moon project at 512 W. Main St.

“The new building consists of six stories, and that’s 67 feet and 6 inches high,” said Mary Joy Scala, the city’s historic resources planner. The buildings no longer directly touch each other as had been shown at a previous meeting.

However, architect Bill Atwood asked for a deferral of his Atlantic project across the street at 501 W. Main when it appeared the BAR would not issue a final certificate of appropriateness.

The last time the BAR saw Atwood’s project was in December when they approved the massing for the structure.

This time he asked for their final approval for a design for a by-right building that would rise 52 feet above East Main Street and 60 feet above Commerce Street.

There will be a section of the building that will create a new storefront on West Main Street next to two historic homes that will sit in front.

“In staff’s opinion, the new design of the West Main frontage minimizes the impact of the garage entrance and mimics the existing rhythm and scale of the historic buildings,” Scala said.

City resident David Hopper read from a letter from Brad Worrell, a Commerce Street resident who has been monitoring the development but was unable to attend the meeting.

“We are vested in the development being done right, that is, in concert with the surrounding area,” Worrell wrote.

Worrell said he thought the current design was an improvement on previous ones because of the outdoor arcade and recessed garage entrances. But he said his concern was the final product will not respect the history of the area, pointing to another Atwood project on Water Street.

“I find his Waterhouse building to be egregiously out of place and is akin to a cruise ship parked in the middle of downtown,” he wrote.

Atwood said he understood why many people are opposed to the building.

“It’s a complicated building, politically, not unlike some others that we have done,” Atwood said, adding he was offended that Worrell’s letter was read out loud.

“If somebody’s going to write a letter like that they’d better come read it to me,” he added.

BAR members felt they needed more information before they could make a decision.

“I don’t trust these drawings very much,” said BAR member Karl Schwarz. “I want to know what we’re going to get.”

Atwood said he would refine the landscape plan and would change the color scheme.

Jeff Levien, developer of the Blue Moon Diner project, was only seeking approval of massing at this month’s meeting.

A rooftop lounge and an appurtenance have been removed from the project since its last appearance before the BAR in January.

“In staff’s opinion, the massing and siting have been improved by lowering the height and adding space between the historic buildings and the new construction,” Scala said.

At the BAR’s request, project architect Jeffrey Dreyfus showed images of how neighboring properties might develop in the future in order to provide more context.

“It’s hard to talk about this building in the context of just what’s there today but it’s also important for us to bracket the conversation with what could come in the future,” Dreyfus said.

The BAR was supportive of the project.

“With the elimination of the appurtenance level, the height feels much more natural,” said BAR member Justin Sarafin.

However, one member of the BAR thought the project should be smaller.

“This building could benefit from some shaving back here and there,” said Melanie Miller, BAR chairwoman.

Additionally, the BAR approved conversion of a window into a door at the First Baptist Church to add an ADA-compliant walkway. They also approved a patio for Orzo Kitchen & Wine Bar at 416 W. Main with some conditions.