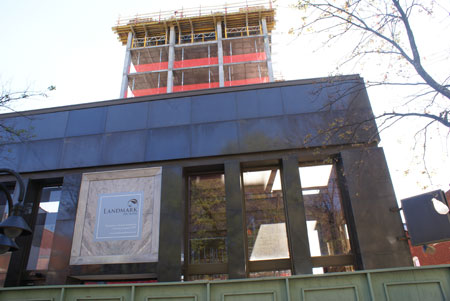 The developer of the new Landmark Hotel on the Downtown Mall has been granted conditional permission to tear down the black granite façade that is the last standing remnant of the former Boxer Learning Building. The Board of Architectural Review (BAR) approved the permit at their meeting on October 21, 2008. However, if Minor Family Hotels does decide to take down the façade, they may be required to build an exact replica.

Mary Jo Scala, the City’s Historic Preservation Planner, said the original permit to demolish the building was granted in January 2004, except for the façade. When the demolition was reapproved in February 2007, Minor was required to keep the first 12’ of the building, which was built in 1966. Currently, the Landmark is under construction and the removal of the building behind the façade has exposed structural problems.

“Apparently, they’re nervous about when they get to the point of removing the existing floor that firms the first floor because that’s kind of holding it all together,” Scala said. She said that the project’s construction manager, Cliff Harrison, said to her that Minor wants to try to preserve the façade if at all possible.

In his testimony to the BAR, Harrison said the applicant had believed the floor could be used for the restaurant space that be located at the front of the building. However, the floor may not be able to support the required weight load. Harrison said the hotels’ construction is ahead of schedule, and that the applicant wants the option to demolish the façade if it were deemed necessary by the engineers overseeing the work.

“We don’t want to get to a point and have something bite us in the back end, and we saw this as being as one of those variables out there,” Harrison said. If it is necessary to take the façade down, Harrison said it would be “resurrected” according to the designs approved by the BAR.

BAR Member Brian Hogg asked if the applicant would later come back with a proposal to change the façade, given that the original designs depicted using the original structure and façade.  Harrison said that was out of his control, but that the intent of the design would remain intact.

“Granite is granite, and I think it’s a matter of what the degree of polish you have on it and what the color tone is,” Harrison said.  “I’m coming here in all honest saying that this is just an issue that we have concern [about] on a construction site that does have some relevance to safety.”

BAR Member Syd Knight said he was the only member of the BAR who was there in January 2004 when the demolition permit for the back of the building was granted.

“There was some discussion at the time of taking of that façade down and whether it was worth saving, and there was fairly strong feeling in both camps,” Knight said. “Some said it was out of character with the rest of the mall and not exactly the most attractive or architecturally worthy….Others felt that whether or not it was considered compatible with the rest of the Mall, it was certainly an example of its time and place.”

Knight then said the owner of the property at the time “short-circuited” the discussion by offering to keep the façade. He said he leaned in favor of granting the applicants the “flexibility they’re looking for” but hoped that they could keep it.  He said the building currently under construction is one of quality.

BAR Member Eryn Brennan, a historic preservationist, said she was not in favor of granting the request because the façade is unique. She said construction was always going to be an issue, and said that a replica would not be as desirable as the original.

“Although my own personal aesthetic preferences don’t tell me that’s the best façade, nonetheless I think it has a great historical value on the mall and in Charlottesville,” Brennan said. “It gives the new building a very grounded sense of place here on the Mall.”

Hogg said he did not share Knight’s confidence that the developer would be able to come up with a suitable replica. Although he said that a good engineer could find a way to save the façade, he said the BAR should consider letting  the façade go, because it’s only a shred of the original structure.

“I think we’re deluding ourselves when we’re talking about demolition here,” Knight said. “I mean, that building is gone… I think this one has already been killed and maybe we should just put it out of its misery.”

Brennan said she thought the scraps are worth saving, and that the Mall will face this issue again and again and she did not want to set a precedent that would make it easier to take down other facades in the future.

BAR Chair Fred Wolf suggested requiring the applicant to replace the façade as-is in order to create an incentive for them to keep it.  However, Wolf said the compromise would not prevent the applicant from coming back before the BAR in the future with a new façade design. Wolf’s motion passed 5-1 with Brennan voting against.