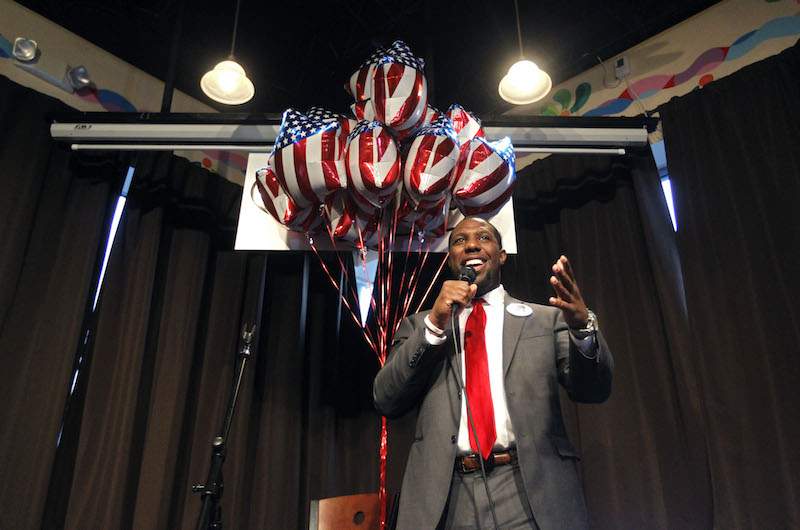 Albemarle High School teacher Wes Bellamy has officially launched his campaign for Charlottesville City Council. This is Bellamy’s second attempt to secure the nomination of the Democratic Party.

“One city, one community, one Charlottesville,” Bellamy repeated during his announcement Sunday night at C’ville Coffee. “I want to bring everybody from different races and ages together for the greater good.”

In 2013, Councilor Bob Fenwick secured a five-vote victory over Bellamy in a Democratic primary contest that was tied and had to be resolved with the review of provisional ballots.

There are currently no African-Americans on the council, but Bellamy, 28, said he doesn’t want that to be a factor in the race.

“Over the last couple of years I’ve learned that he’s a father, a well-liked teacher, a graduate student, and he hopes to be a principal one day,” said Daugherty.

Daugherty said she commended him on encouraging people to come out to public demonstrations in a country that needs public protest.

“Wes has persisted to involve himself in our community and our children,” said Daugherty. “I think City Council can use the viewpoint of a teacher.”

“He is one of us, someone who belongs, lives and works in our community,” said Edwards.

Bellamy moved to Charlottesville in 2009 and is currently in his fifth year as a computer science teacher at Albemarle High.

“Teaching is my passion, so if elected I want to work with our local school board to bring some of the best schools possible to the commonwealth of Virginia,” said Bellamy.

Bellamy said he’s learned a lot since his first campaign two years ago.

“This time I am going to focus more on listening,” said Bellamy. “Listening to the entire community, because it’s about all of us.”

In addition, Bellamy said he will be focusing on the safety of Charlottesville residents and promoted what he calls “relational policing,” which he said will encourage the community to work together to increase safety.

After watching the City Council as a resident the past two years, Bellamy said if he is elected this year he would like to see the council work better together.

“We need to be more cohesive,” he said. “It’s difficult and a challenge, but as an educator I have to do this every day.”

The City Council plans to use a meals tax increase to balance the upcoming budget, and Bellamy said he wants to learn more before taking a position.

“I want to hear more from business leaders and see the effect the meals tax will have on them,” he said.

Three council seats will be on the Nov. 3 general election ballot. Those seats are currently held by Huja, Galvin and Dede Smith.

Huja previously announced he will not seek another term and Galvin has submitted her statement of qualification with the Virginia State Board of Elections. Smith has not announced whether she will seek re-election.

Democrat Michael Signer launched his campaign for the nomination last week. Belmont resident Lena Seville has told the media she is considering a run and will announce her plans in the next week.

Computer programmer Anson Parker has said he is preparing to run as an independent.