Enhanced Belmont Bridge to be presented alongside underpass 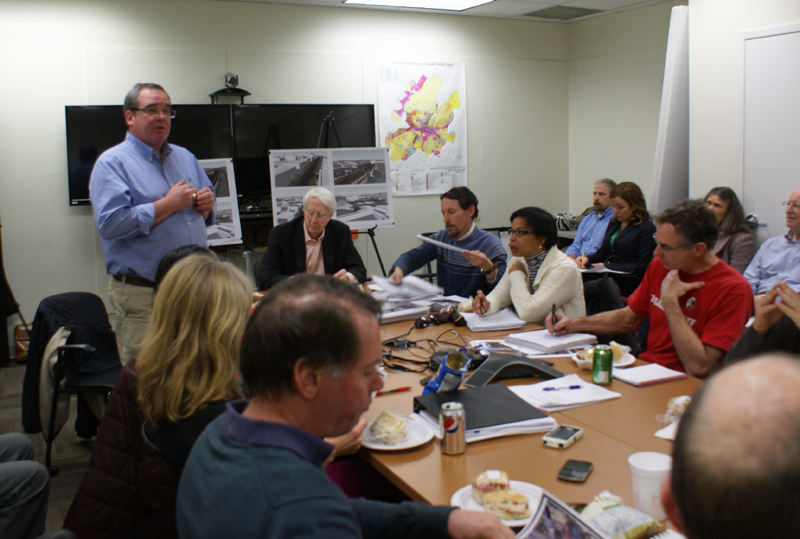 An advisory group tasked with overseeing new infrastructure projects in Charlottesville has been shown two concepts for a new span to replace the Belmont Bridge.

Following a public meeting last November, city staff directed the firm MMM Design to create ‘enhanced bridge’ scenarios to provide a more direct comparison to a citizen-generated concept that would create an underpass below the railroad tracks at the site of the existing bridge.

“When we went to council back in the fall, council said to flesh out the enhanced bridge design better so they can make a better apples-to-apples comparison so they can make a decision on which way to go,” said Jim Tolbert, the city’s director of Neighborhood Development Services, at a Thursday meeting of the PLACE Design Task Force.

The bridge concepts are in competition with the underpass concept, which was developed in part by Charlottesville architect Jim Rounsevell.

Rounsevell has created a Kickstarter campaign to raise funds to promote the “long-term benefits of the underpass option” as well as a pedestrian-only bridge to connect Belmont and downtown.

“For such an important and crucial decision, it is incumbent upon the citizens, and especially government, to engage in a transparent, fair, and unbiased assessment of the design concepts,” Rounsevell said in an email.

However, Tolbert told PLACE members he would invite Rounsevell to present the underpass concept alongside the enhanced bridge designs at two public meetings in April.

Tolbert said he expects the council to make a decision in May.

The two bridge proposals are similar in that both would cut the bridge’s length in half, would anticipate buildings being built up to the road, and would eliminate the parking lots underneath.

One would be more like a traditional highway bridge whereas the other would have a steel arch spanning across to create an iconic feature.

“The major difference [in the second option] is to create a statement that this is a bridge and a focal point that is the backdrop for the mall, Water Street and Belmont,” said Wiley Cooke, an engineer with MMM Design.

Joe Schinstock, a principal with the firm, said his original task was to design a replacement bridge in the same space within specific requirements.

“We were charged with maintaining at least one lane of traffic in each direction for the duration of the construction, we were required to keep the same amount of parking under the bridge, which led us to a similar bridge to what is there now,” Schinstock said.

The new designs were created after the city waived those requirements. That has allowed space for bike lanes and 10-foot sidewalks on both sides of the bridge.

One of the design concepts shows a barrier between the bike lane and the sidewalk, though cyclists would be on a slightly elevated pathway.

That concerns Amanda Poncy, the city’s bike and pedestrian coordinator.

“There’s a ton of evidence out there that suggests that providing separate lanes is really the only way to be able to encourage the very large percentage of the population to stop using a car and choose to ride a bike,” she said.

PLACE members pushed designers to consider making the bike lanes wider and to create a “narrative” to help citizens better understand why the bridges are considered “enhanced.”

“There will be some public misunderstanding if you don’t present that,” said Genevieve Keller, a city planning commissioner and member of the PLACE group.

Building the enhanced bridge will require Avon Street to be closed for at least a year; constructing the underpass also would require closure for a long period of time.

The task force asked the team to begin preparing a strategy for what to do in either case.

“There are no obvious detours,” Schinstock said. “You’re basically talking about Carlton Avenue and going down Monticello Avenue to Ridge Street.”

“But this is one of those unusual situations where there are alternatives when people learn them,” Tolbert said.

In recent years, the city closed Jefferson Park Avenue for over a year while the railroad bridge there was replaced.

City Councilor Kathy Galvin said she was glad to see the new designs.

“Shortening the span over the railroad tracks will both save on construction costs and provide more street frontage along Avon,” Galvin said in an email. “Getting the buildings close to the public right of way, widening pedestrian and bike ways and reducing the number of vehicular lanes from [4 to 2] will slow down auto traffic, making it safer and more inviting to pedestrians and cyclists alike.”

However, Galvin said she is not ready to make a decision on which concept to pursue and that cost estimates will be a factor.

Schinstock said there may be cost estimates as early as next week. He is working with the firm Barton Malow to price the options, but added his firm will also develop estimates.

Rounsevell said his campaign will create a 3-D animation that demonstrates how the underpass and pedestrian bridge would work.

“We also hope to fund a study of the financial impact this decision will have on the future of this precinct,” he said.