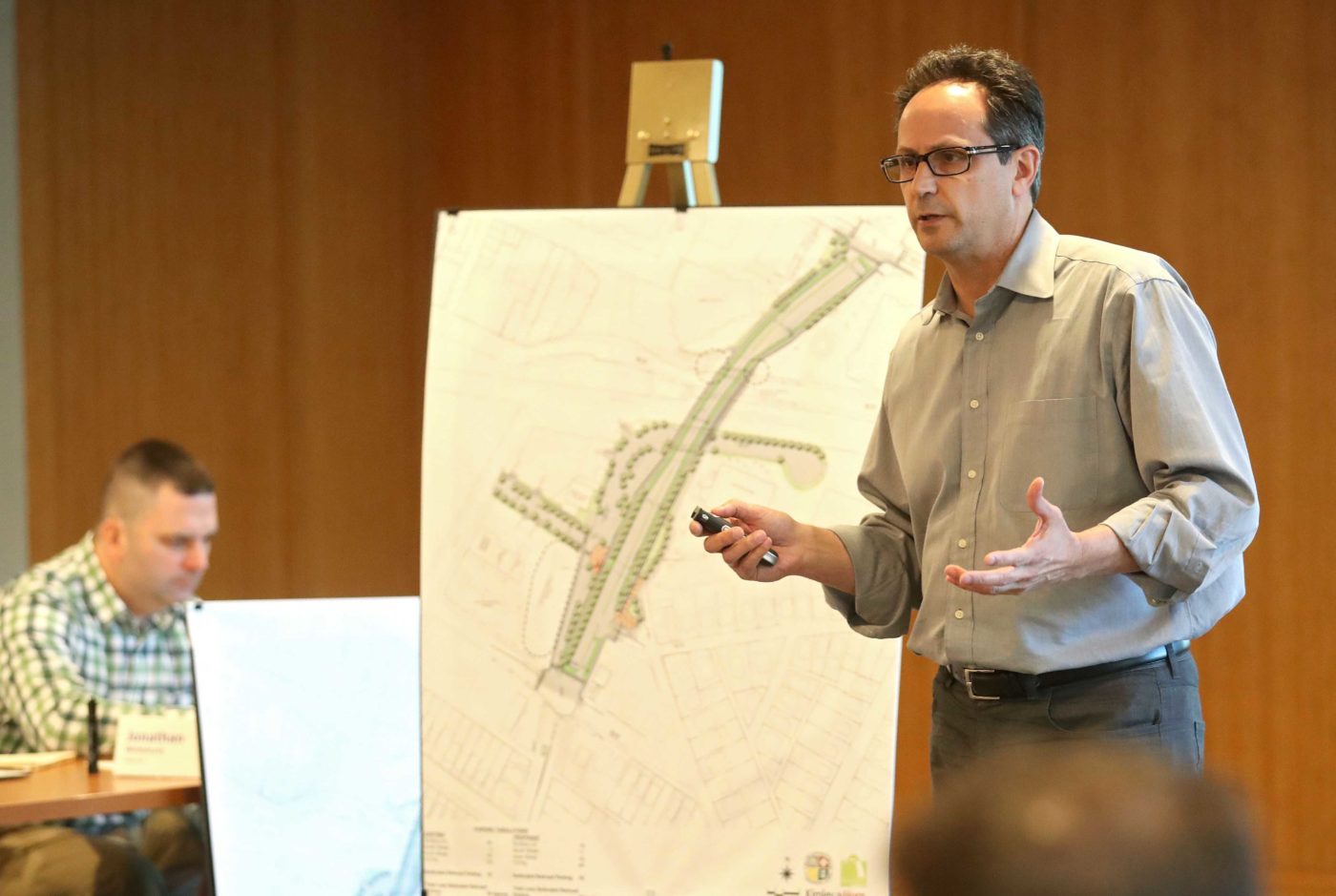 Sal Musarra with Kimley-Horn at May 15, 2017 steering committee meeting

Richmond-based Kimley-Horn Associates is coming closer to developing a design for the replacement of Charlottesville’s Belmont Bridge, and a steering committee overseeing the company’s work was presented with several alternatives Monday.

Engineers and designers with Kimley-Horn have not yet developed distinct concepts but showed the committee several alternatives for all facets of the bridge to get feedback on what aspects they should further develop.

“We’re not coming in with final design today by any means,” said Sal Musarra, project manager for the replacement project. “These are an evolution of the design elements since our design workshop.”

Should there be skirting on the bridge to hide the sight of the beams? How tall should the railings be on the parapet, and where should it be located? Should there be at-grade pedestrian crosswalks across the bridge?

These are the kind of questions whose answers will affect the ultimate cost of the replacement structure. The current bridge is deteriorating and the city has a budget of about $23 million to replace it.

“At some point, we do have to have a trade-off conversation and the city has to analyze what’s [required] with your input,” said Brian McPeters, an engineer with Kimley-Horn. “We’re obviously not to the point where we can say to the penny what things cost but we can give you a ballpark.”

Kimley-Horn is the second design and engineering firm to take a shot at developing construction documents. The City Council entered into a $1.98 million contract with the firm last December.

The committee previously reached consensus that it wants a shorter bridge than the current 440-foot-long span. The request from a majority of the City Council is to have one travel lane in each direction on the bridge.

Monday’s meeting took the committee through alternatives for the two approaches but there is only one concept for the bridge itself. The structure would 62 feet wide consisting of 10-foot-wide sidewalks on either side, two seven-foot-wide bike lanes with a three-foot raised buffer and two 11-foot travel lanes.

“Early on we heard that we don’t want a highway bridge here,” said Don Paine with KGP Design Studio.

Part of Kimley-Horn’s brief is to come up with an urban design that would create a new street network in the vicinity of the bridge.

Five streets currently meet at the nearest intersection south of the bridge. Under one alternative, Avon Street would be closed off and that traffic would be routed back to Sixth Street Southeast.

“Operationally, it does a lot of bad things to that intersection,” McPeters said “If we could reroute that traffic and close Avon off, we regain a lot of public space.”

One member of the steering committee asked if it were possible to add two more travel lanes to the bridge.

“We’re assuming the council has made the best decision for the city of Charlottesville,” said committee member John Harrison. “Has anyone thought to consider whether council made the right decision?”

McPeters said the number of lanes on Ninth Street Northeast north of the bridge could change as part of the $5.63 million East High Streetscape project that has been funded by the Virginia Department of Transportation.

“Though you have a four-lane bridge now, you have two lanes south of you,” McPeters said. “In the future, having a four-lane section north of you is unlikely.”

Other future possibilities include a better way to get pedestrians from the bridge to the Downtown Mall.

For example, one idea is whether a pedestrian and bike tunnel could be dug underneath Ninth Street on the southern approach to replace the current mid-block pedestrian crossing. McPeters said the existing condition is dangerous because it is on a grade of 6 percent.

That idea troubled Belmont resident Lena Seville, who said the tunnel would be dangerous.

McPeters said they can present an alternative that includes the mid-block crossing.

Kimley-Horn will spend Tuesday presenting the same information to city advisory groups, including the Board of Architectural Review, the PLACE Design Task Force and the bike and pedestrian committee.

An open house will be held at CitySpace on June 1. The City Council will make a decision on an alternative in the fall.