The two competing alternatives for the replacement of the Belmont Bridge led to a packed room Wednesday in the Jefferson-Madison Regional Library main branch. Charlottesville City Council will hold a work session in the spring to select a project.

“We are here to tell a story about the future of Charlottesville,” local architect Jim Rounsevell said.
Recently, the city decided to replace the current bridge, built in 1961, rather than make repairs.  Belmont resident Brian Wimer launched a contest to encourage new ideas after he felt the plans created by MMM Design were off target. The University of Virginia School of Architecture followed suit with a week-long project called the Belmont Bridge Vortex in February 2012. The city hired Rounsevell to sift through the results of the contest.
“The design process was placed on hold to evaluate the results of these two contests,” said Jeanette Janiczek, the city’s urban construction initiative manager.
In July 2011, the Commonwealth Transportation Board fully funded a cost estimate of $12.4 million for the project. Janiczek said the project was designed to be one that stayed within the budget and right of way.
“These limits were lifted during the [contest] to encourage more creative solutions,” Janiczek said.
Rounsevell, along with Pete O’Shea of Site Works Studios, came up with the two alternatives. One consists of a new bridge and the other creates an underpass beneath Water Street and the railroad tracks.
A suggested pedestrian bridge is not included in either option presented to the public. Rounsevell estimated it could cost as much as $3.5 million.
“We could go for a VDOT revenue sharing grant [for a pedestrian bridge],” Janiczek said. “We would explore as many different grant opportunities that this could be applied to.”
City officials created a handout for the event that suggested a feasibility gap between the two alternatives.
The city stated that replacing the bridge would need no further environmental study, allow for traffic to be maintained during construction, be complete in three years and cost $12.4 million.

However, according to the handout, the underpass option would require new environmental studies, require Avon Street to be closed during construction, take seven years to complete, and cost as much as $30 million.

The city also stated that the underpass would require the purchase of several properties, including partial acquisitions of Spudnuts, the nTelos Wireless Pavilion, Lexis-Nexis and INOVA.
Rounsevell said the site has been buried since the bridge was built in 1961 and that the area around has enormous growth potential.
“We now have a golden opportunity to extend the Downtown Mall southward,” Rounsevell said. He added that pedestrian links to the Belmont neighborhood would trigger economic development.
“What do want this place to be in 30 or 40 years?” O’Shea asked as he began his presentation. “We know we have to figure out the technical reality of building in this place. There are acres and acres of potentially vibrant community space.”
O’Shea acknowledged the logistical differences between the two schemes, but asked attendees to keep an open mind.
Wimer opened up the question and answer period by asking O’Shea and Rounsevell if they agreed with the city-produced fact sheet.  O’Shea
did not want to directly answer the question.
“These are pretty conceptual improvements,” O’Shea said. “The numbers for underpass are more speculative. Our numbers are not based on engineered drawings yet.”
O’Shea encouraged citizens to take the long view, and pointed out that no one will remember that the road was closed in 50 years.
Bern Ewert, who served as deputy city manager in the 1970s, said he liked the underpass concept, but its cost and construction schedule make it a prohibitive option.
“As a developer, I’m going to be unhappy if I have to put up with road shut-downs because of this,” Ewert said. “I can’t imagine the state is going to give the money for this.”
Janiczek said the bridge would have to be completely removed before the tunnels under the railroad could begin to be dug.  She said that would require the road to be shut down for a long period of time.
“That would be very traumatic for businesses in Belmont,” said Adam Frazier, the owner of the Local restaurant.
City resident Carol Towler said she thought the project should be as cost-effective as possible for taxpayers.
“The city should not consider doing an underpass with all of the additional unknowns,” Towler said. “The city of Charlottesville and our leaders need to stop thinking about the pipe dreaming and get down to the brass tacks and stop always finding new ways to tax us.”
Joe Schinstock of MMM Design, the firm originally hired to engineer the bridge replacement, said that the cost estimate for the underpass was based on a similar structure currently under construction in Hampton Roads.
However, several other people said they would be willing to pay for the more expensive option.
“For me, I want to invest my tax dollars, and I thank you for taking the long view,” said Elaine Bailey.
The city will accept public comment on the options through the end of the month.
“We’re trying to get enough information for people to feel comfortable to have one concept move forward,” Janiczek said.
City Council will hold a work session in the spring to select which approach to further develop.
Below, additional renderings provided by architect Jim Rounsevell 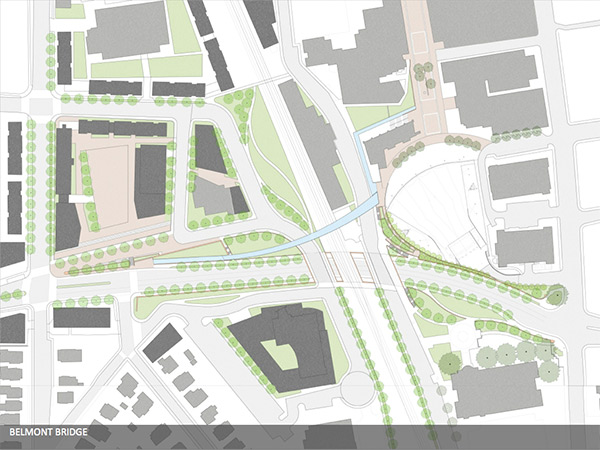 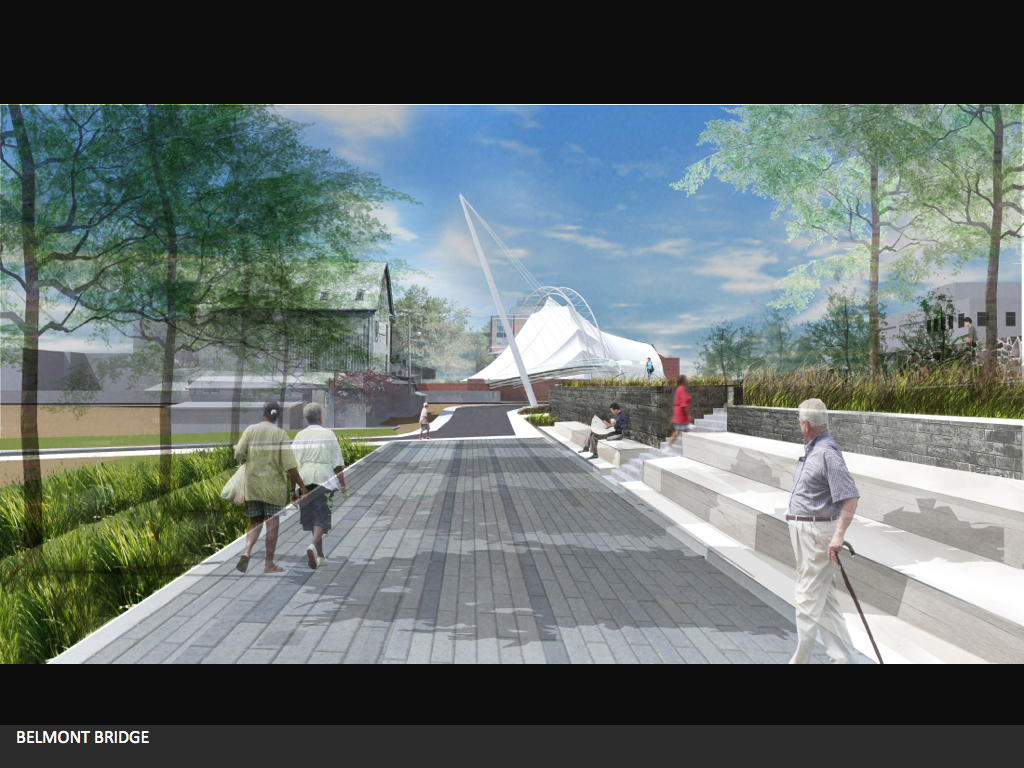