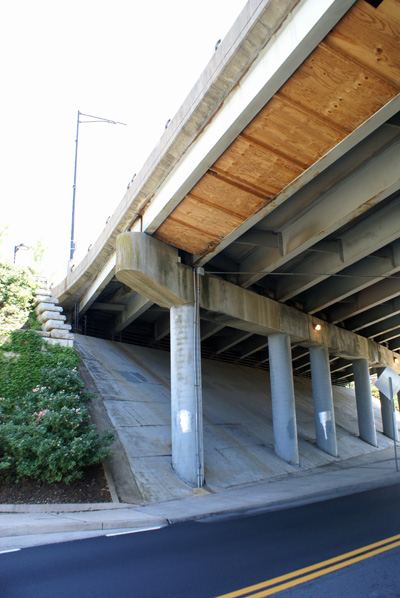 “The bridge was built when all anyone cared about was getting automobiles across,” said Jim Tolbert , the city’s director of neighborhood services development. “No one was worried about bikes or aesthetics. We have a real opportunity to change that.”

The first public step in the bridge’s replacement was taken at a meeting Tuesday at which city officials gathered initial feedback from residents about what they’d like to see in the bridge.

“We’re in a very conceptual stage,” said Joe Schinstock of the MMM Design Group, a firm hired by the city to work on an initial blueprint for a new bridge after inspections revealed corroded steel and flaking concrete on the existing bridge, which was completed in 1962.

“We have identified what our constraints are and what the limitations on the project are, including such things as staying in the existing right of way,” Schinstock said.

Four years ago, crews covered the bottom of the bridge with plywood after chunks of concrete fell onto the street below.

“It no longer makes sense to repair the bridge,” said project manager Jeanette Janiczek. “It is in need of replacement. It will only continue to get worse… we’re at a point where it makes more financial sense to replace than to repair.”

The current cost estimate for the replacement is $9.2 million, according to Janiczek. Currently, the city has saved $5.3 million towards the project, but further funding is not expected from the Virginia Department of Transportation until at least the year 2018. The city will continue applying for revenue sharing funds to help save up for its No. 1 transportation priority, according to Janiczek.

“We’re here to design it so that we can let the state know that we’ll be ready to build,” she said.
Even though design work has not yet begun, officials with MMM Design have been assessing the situation.

“We have identified a couple of areas where there are opportunities for green space, pocket parks, as well as improvements to intersections on either end of the corridor.”

“We’re in the process now of gathering info from the community to get a feel for where they think this should go,” Schinstock said. “This is about making it much more than just a mass of concrete steel.”

Ruth Stornetta serves on Charlottesville’s bike/pedestrian safety committee. She said the existing bridge is a hazard for all but the most experienced cyclists because there are no bike lanes.

“Right now, you’re essentially thrown to the wolves because you have to take up the whole lane,” Stornetta said. “We have this complete streets concept that the roads are open to accommodating all road users.”

Belmont resident Rob Craighurst said his 6-year-old daughter does not like to walk on the bridge because vehicular traffic is too close to the sidewalks. He suggested higher railings and a wall of some kind to protect pedestrians.

Aesthetic considerations were brought up, as well. The 1962 bridge replaced another that had been constructed in 1905. Preston Coiner, a member of the city’s architectural review board , said he preferred the original bridge.

“It wasn’t just a roadway with a guard rail on each side, as this one seems to be,” Coiner said. “As someone who drives up there, it’s frustrating. You know you’re going across the railroad, but if you look out, all you can see is the concrete wall.”

Coiner said he would like the new bridge to have more character and suggested that the sidewalks on the bridge could be made of brick to extend the Downtown Mall.

MMM Design is obligated to finish a design by October. Schinstock said construction will likely take about 18 months because of the need to keep vehicles flowing.

Traffic will continue to flow on the bridge no matter what design is selected because the existing bridge is actually two spans, which will allow at least one lane of traffic to flow in each direction.

“We’ve realized that there is no good detour,” Janiczek said.

The sidewalk on the eastern side of the road has already been closed for safety reasons, and may not reopen until the bridge is replaced. City Council will decide in December whether to proceed with repairs in the meantime. If the bridge continues to deteriorate, there is a possibility that weight restrictions might be placed on vehicular traffic.