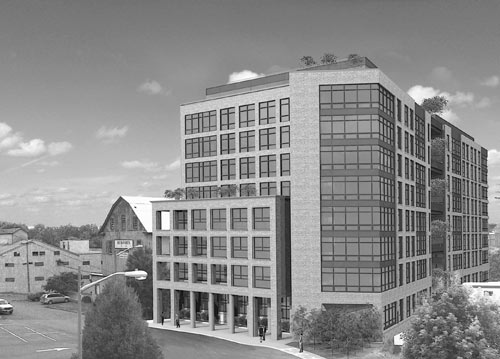 Rendering of 201 Avon development project in 2006

Last week, Alexander Ikefuna was named director of the city’s department of neighborhood development services. He replaces Jim Tolbert, who left in February after holding the position since 1999.

This summer, the city has considered permits for two nine-story buildings south of the Downtown Mall.

Both Oliver Kuttner’s project at 201 Garrett St. and Andrew Baldwin’s proposed tower at 550 E. Water St. require special use permits. Kuttner needs a permit to build up to 233 apartment units and Baldwin needs one for his residential tower.

Residents of nearby properties have argued at public hearings against the city allowing these projects out of a concern that their heights would be out of scale with existing conditions.

Kuttner’s project is located within the Strategic Investment Area, which is under a plan guiding development south of the Downtown Mall. The document calls for buildings no higher than six stories.

However, the land also is within the city’s Downtown Extended zoning district, which allows nine-story buildings.

Councilor Kathy Galvin has called for a review of the zoning to bring it in line with the SIA, which is now part of the city’s Comprehensive Plan.

City planner Brian Haluska says staff has not been charged to conduct such a review. The zoning on West Main Street, however, is being reviewed in order to lower maximum building heights.

In the meantime, there is the potential for more nine-story buildings in substantial overlap of Downtown Extended and the SIA.

In 2006, the city approved a nine-story mixed-use building that would be built around at the Beck Cohen building at 201 Avon St. The site plan for that project expired in October 2007, but a new developer could come in with a new plan as desired.

Any mixed-use building in the Downtown Extended zone can be constructed to a height of 101 feet without a special use permit, but one is required for additional residential density.

Single-use buildings can only be as high as 50 feet.

One business within sight of the Beck Cohen building is aware of the possibility of gaining a tall neighbor and has reviewed the previous plans.

“I think that it would be a little ambitious to put something like that in that neighborhood,” said Hunter Smith, the owner of Champion Brewing Company. “I think it would be pretty jarring, but I’m not necessarily opposed to it.”

Smith said he felt the popular destinations in the area are currently smaller one-story buildings such as Lampo’s Pizza, Charlottesville Community Bikes and The Bridge Progressive Arts Initiative.

Slaats said he understands that many developers seek to maximize the size of buildings because project financing can be dependent upon it.

“It’s kind of sad that developers feel like they have to build nine-story buildings on pretty small spaces just because their financials have to work out that way,” Slaats said.

Another looming question is the future of the city’s Belmont Bridge replacement.

The current bridge was completed in 1962, and the city has been planning for a replacement since 2009.

A concept created by MMM Design was panned by some in the Belmont neighborhood who said it did not do enough for the pedestrian experience.

That spurred a design contest that led to a competing vision to route Avon Street below the railroad tracks in an underpass.

The council dismissed that option last summer and opted to proceed with a bridge replacement. A new firm has not been hired yet, but a citizen task force has been appointed to oversee the creation of a request for proposals.

There is no timetable for when that work will be completed.