If you see teams of university students and faculty circling around downtown Charlottesville over the next 10 days, they’d like you to know that they are part of the “Belmont Vortex.”

This whirling academic energy is being directed by Iñaki Alday, the chair of the University of Virginia Department of Architecture. Alday convened the entire school at Culbreth Theater Wednesday and challenged them to find new solutions for the redesign of the city’s Belmont Bridge .

The studio desks and class schedules at Campbell Hall have both been cleared for everyone to participate in a grassroots design contest that the faculty says is unprecedented.

“This is the first time ever that all the designers in the school have worked on one project,” said Elizabeth Meyer, an associate professor in the Department of Landscape Architecture. “This might be a model for how we can rethink how we teach.”

The “Belmont Vortex” design workshops will be led by a visiting professor from Spain, Eduardo Arroyo, described by Meyer as being both “relentlessly pragmatic and visionary.”

“A vortex is a place where many things happen at the same time,” Arroyo said. “I’m here with a mission to make you imagine the city, to use your imagination, your fantasy, and that’s a different field.”

Arroyo will take the 310 undergraduate and graduate students and form 29 teams which will each produce a design concept for the bridge’s replacement, a $14.5 million project with design work well underway by the city and MMM Design .

On Saturday, Feb. 11, the student designs will be unveiled at the Music Resource Center before being moved for display to CitySpace on the Downtown Mall.

The idea for a design competition came from Belmont filmmaker Brian Wimer , who said he wasn’t satisfied with the first design shared with the city’s Board of Architectural Review last fall.

“What started as a more constructive form of protest has turned into a real rethinking of the urban design,” said Wimer, who has assembled a panel to judge the entries. “I have no expertise on architecture and engineering, I just know a good city when I’m in one. I am in a great city, but it could be better.” 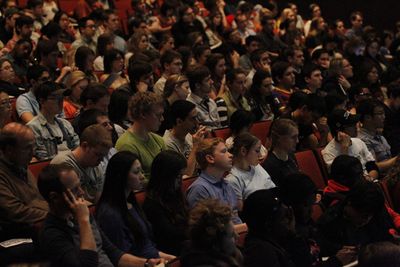 Jim Tolbert , the city’s head of neighborhood development services, was one of nine speakers who gave the students background on the Belmont Bridge and the neighborhood’s history.

“I think we are looking to get some interesting ideas,” Tolbert said. “We do want to manage expectations and I don’t think that a single idea will come out of these competitions that will be a [complete] bridge design, but I expect we will get a variety of ideas that will challenge our thinking and lead to a better design.”

For faculty and panelists introducing the project to the students, it was apparent that the challenge is greater than simply building a new bridge for automobiles.

“I don’t care about moving automobiles, I want to build the city,” said professor Daniel Bluestone . “It isn’t that the bridge won’t be present and moving traffic, it’s just we need to be thinking more broadly about the city.”

Bluestone shared a slideshow covering the site’s development from 18th century town plans to the current bridge’s opening in 1961 to the opening of the Pavilion in 2005 at the northern end of the bridge. He raised concerns about environmental justice and about black and white neighborhoods divided by the bridge’s construction.

He challenged the students to reflect on what was there in the past and to focus on design ideas that would contribute to a pedestrian-oriented downtown.

“We feel pretty good in Charlottesville having done a pedestrian mall; we pushed back on the automotive culture,” Bluestone told the students. “If you look at the scale and the form of that bridge…clearly it is an auto-centric set of planning concepts. This was not about getting people to a place, it was about driving people past a place.”

Tolbert said the work by MMM Design was on hold so that some new ideas could be evaluated.

“They haven’t given us a final design yet, but they have investigated lots of concepts and determined some of the structural alternatives,” Tolbert said. “They are just at the stage where we are starting to get public comment, and their contract requires them to incorporate community input and good urban design practices.”

“Think about the way the bridge impacts the value of the properties around it,” Stoner said. “It’s important that the vision be bold, but that it also be executable.”

Bill Davies, owner of The Farm grocery store at the bridge’s southern end, was interviewed as he walked over the bridge heading towards downtown.

“This conversation is opening my mind a bit,” Davies said. “When I came to this town, this area was what I gravitated towards. I sensed an energy and opportunity, and today it’s a significant gateway that is underperforming.”

The dean of the School of Architecture, Kim Tanzer , is on the board of directors of Charlottesville Tomorrow . Representatives from MMM Design were invited to comment on this story, however they deferred to the city’s Jim Tolbert to speak about the project.

Learn more about the bridge at www.belmontbridge.com and the design contest at www.thebridgepai.com .