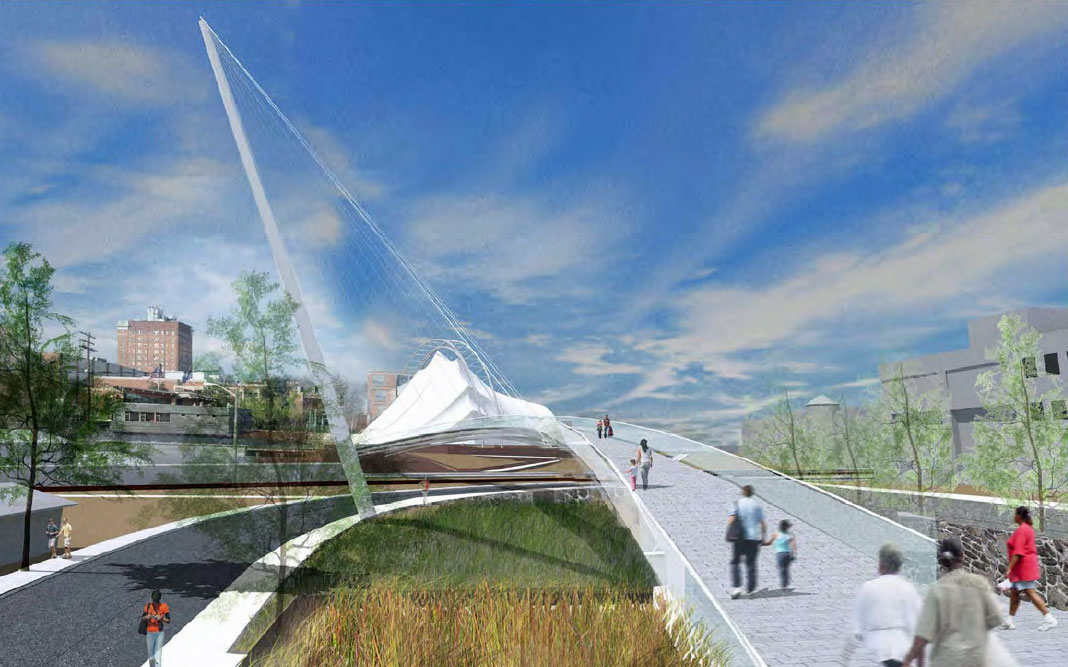 The Charlottesville City Council has directed staff to develop a cost estimate for a new Belmont Bridge that would be safer for pedestrian and cyclists, but has not discarded an option to tunnel Avon Street underneath the railroad.

“The primary focus of this next phase is that if we’re going to do a bridge, what kind of bridge would the community want,” Councilor Dave Norris said.

The city has been planning to replace the bridge since the council voted in 2008 to pursue that option rather than repair the 1962 structure.

MMM Design was hired to design a new bridge, but its plans were criticized by some in the Belmont neighborhood for not going far enough to accommodate cyclists and pedestrians.

The council has agreed to pursue more than a traditional replacement.

“I have no interest in just the plain-old flat rectangle,” Councilor Kristin Szakos said. “This is something that we’re building for our legacy and I hope it becomes something that can be visually inviting and connecting.”

Following a design contest, Siteworks Studios and architect Jim Rounsevell were hired to sift through the entries to come up with a new solution. Their two concepts were a bridge with bike lanes and an underpass.

Following a public meeting in February, the city hired Barton Malow to prepare cost estimates for both options. The firm estimated the MMM Design for the bridge replacement would cost $14.6 million, whereas the underpass would cost $27.3 million.

Rounsevell is a proponent of the underpass option.

“The underpass will cost more, encounter more hurdles, take longer and be more complicated, but it’s a superior solution to retain the economic competitiveness of our city,” Rounsevell said.

Wolf Braun, a resident of the Martha Jefferson neighborhood, asked the council to end consideration of the underpass option. He said too much stock has been put into the design contest.

“The people paying attention to the contest from the beginning wanted an at-grade intersection, and then they wanted the underpass,” Braun said. “I think the underpass is a planning nightmare waiting to happen, a financial nightmare for the city, and a civil engineering non-starter.”

Belmont resident Tim Freilich said he wanted to support the underpass, but concluded it will feel unsafe for pedestrians, something a new bridge should address.

“I think the proposed replacement highway overpass without adequate biking and pedestrian facilities would be a tremendous lost opportunity,” Freilich said.

Filmmaker Brian Wimer, who launched the contest, said the bridge replacement was based on false assumptions. He said the bridge did not have to be four lanes wide, the railroad could move its rail yard operations away from the bridge, and an at-grade vehicular crossing should still be on the table.

Jim Tolbert, the city’s director of neighborhood development services, said a two-lane bridge could be an option.

Councilor Kathy Galvin agreed with some underpass proponents who claim the bridge estimate is lower than it should be because the MMM Design does not feature amenities requested by some city residents.

“We’ve got to really understand there may not be as huge a difference in cost when you start computing it based on higher design standards,” Galvin said. “[$ ]15 million is based on a design that was rejected by the public because it was too much like a standard federal highway [bridge].”

Galvin said she could not rule out the underpass option because she did not have enough information about what the public wanted.

“Tonight, it was 50-50 for and against, and I want more information,” Galvin said.

“It would be useful to see if the council could make up its mind about whether it wants a bridge or an underpass,” Mayor Satyendra Huja said.

Councilor Dede Smith said the agenda for Monday’s meeting did not state that a decision would be made so it would show a lack of transparency to choose.

“I’m not sure the public feels that they’ve had a good enough say,” Smith said.

“If we find that all the things that we want are going to cost $25 million, then maybe we come back to this point,” Norris said.

Tolbert said the next public opportunity for comment on the bridge will be when the PLACE Design task force meets in October. That group will discuss what design features should be included in the next round of study.

After the council’s discussion, Rounsevell said he wanted to help review the enhanced bridge as it evolved.

“I’ve been working on this project for two years and almost know where every nut is and the dimension of everything,” Rounsevell said.