off East Rio Road has begun to take shape, as residents have filled the first 80 homes and the development prepares to hit a number of other milestones.

Belvedere is known for its environmental focus and its marketing of a “green,” community-oriented and active lifestyle. Every home in Belvedere carries an EarthCraft green building certification, which developers said raises costs but is demanded by many prospective homebuyers. 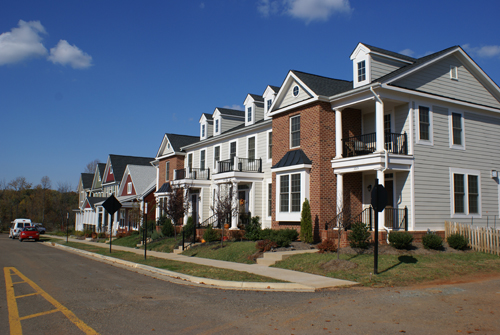 “Regrettably, it does cost more [to build green homes],” said Bob Hauser, CEO of Stonehaus, the developer of Belvedere. “But we knew that there was a component of the market that not only would consider [green homes], but absolutely would demand it, and I think we’ve found those people.”

,” which aims to create mixed-use communities in which walking and other forms of alternative transportation are viable. Developers and residents alike say that this creates a level of community interaction that many find appealing.

Belvedere resident Joe Perpetua said that the neighborhood model was a significant factor when he and his wife chose where to live.

“The homes are built right by the sidewalk and you can talk to the neighbors when they walk by,” said Perpetua, who is retired and moved here from Pittsburgh. “It’s just a different kind of community.”

representatives said they anticipate selling the last of the 116 lots in phase one early next year. Upon full build out, Belvedere will contain 775 residential units.

Cathcart Properties is developing 300 of the next homes as The Reserve at Belmont, a luxury apartment complex, which will begin renting its first apartment units in early 2012. Additionally, 103 “carriage houses” will be built — rentable one-bedroom residences above many lots’ garages — part of Stonehaus’s deal with Albemarle County to provide affordable living choices. The remainder of the units are detached homes and townhouses.

With the near completion of phase one, Belvedere is approaching a number of other milestones.

Hauser said that Stonehaus plans to break ground within the next two months on Belvedere Station, a commercial “town center” that he said could contain a destination restaurant, coffee shop, fitness and wellness facilities and other businesses.

Developers also anticipate a final closing on a new, 6.5-acre location for the Senior Center, currently located at Pepsi Place off Hillsdale Drive.

Hauser said that from the beginning of the project, the development team has tried to keep an “urban mindset,” citing Charlottesville’s Belmont neighborhood as an inspiration for much of Belvedere. He also added that this type of model can lead to much more vibrant and connected communities.

“What you realize is, as places have become more car-oriented, it’s really put a dagger in connectivity, in the connection between people,” Hauser said. “‘Neighborhood’ to me means more than a subdivision or just a development.”

To that end, homes in Belvedere primarily feature driveways and garages hidden behind homes and accessible by separate alleyways. Not only does this improve aesthetics, Hauser said, but it can also improve sidewalk safety.

“You don’t have all those curb cuts and it makes the pedestrian experience far superior,” Hauser said. “It’s a big deal.”

Another part of this urban vision is a “civic core,” modeled as a public square, which will include a community meeting space, a Montessori school and facilities for the Soccer Organization of Charlottesville-Albemarle.

SOCA plans to locate its new headquarters in Belvedere and also has three separate parcels in the works for the neighborhood — a covered indoor field and training facility, a lit all-weather artificial turf field and four natural grass fields.

Bill Mueller, executive director of SOCA, said that final approval for the offices and indoor field in the first parcel was “imminent” and that SOCA would soon start a $4 million fundraising campaign for the facility. 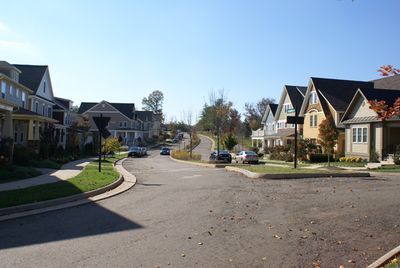 “We’re hoping to bring it back into the front of all of our SOCA participants’ consciousness here as soon as we get over some of these administrative hurdles,” Mueller said.

With 80 homes already occupied, a community has already begun to develop in line with the neighborhood’s values, said developers and residents. Hauser noted that residents have initiated their own ”green” projects, such as adding rain barrels to their homes and planning community gardens.

“It is a very committed group of customers,” said Hauser, adding, “They walk the walk, not just talk the talk.”

Pressed for missing elements, residents cited a lack of landscaping and the need for a traffic light at the neighborhood’s Rio Road entrance, but they generally acknowledged that many of those amenities will take time to materialize.

“Belvedere has exceeded my expectations in terms of being a resident,” said Kate White, Belvedere’s first resident and an active blogger about the neighborhood. “Belvedere is not for everyone, but it’s an amazing project. It’s completely engaging for me as a health practitioner and as a mom.”