Bike tickets on the rise, with consequences for driving records 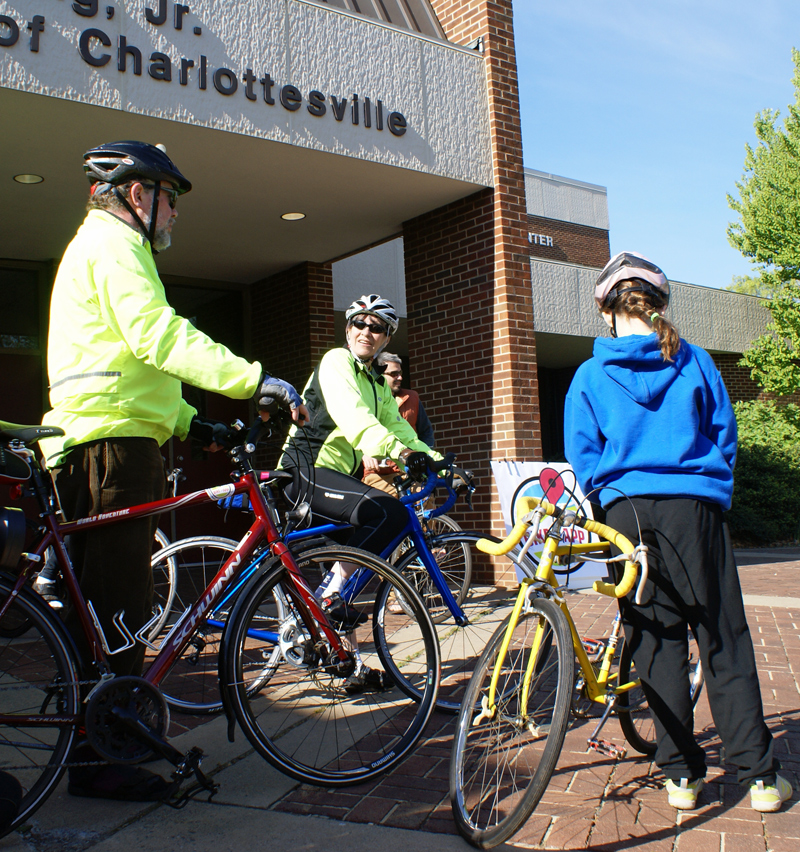 Charlottesville bicyclists preparing for a ride

Bicyclists getting tickets need to watch the road, and court computersDid you know bikers face the same consequences as drivers for traffic violations?Bike and pedestrian safety gets more attention in Charlottesville

The number of traffic tickets issued to bicyclists in the city of Charlottesville has nearly doubled in the last two years. The tickets, the same as those issued for drivers caught in similar violations, can lead to the same penalties and consequences.

Local cycling enthusiast Morgan Cruthirds is guilty of running a stop sign on Jefferson Park Avenue near the Fry’s Spring Beach Club. He and another cyclist received a court summons for the charge, and faced the risk of a conviction getting added to their driving records by the Virginia Department of Motor Vehicles.

Cruthirds is not sure the two modes of transportation should be treated the same way.

“When I learned to drive, I was taught that I was handling a deadly weapon,” Cruthirds said. “There is a part of treating a bicycle as a vehicle that just doesn’t make sense. My buddy was in fear of losing his driver’s license.”

The Virginia Department of Transportation says that bicyclists and motorists are subject to the same laws that govern traffic regulation.

“The officer will put the code section on all traffic tickets,” Charlottesville police Lt. Ronnie Roberts said. “No distinction is made for cars, trucks, tractor-trailers, motorcycles or bicycles.”

Charlottesville Police Department data show that 26 bicycling traffic tickets have been issued in the city in the past two years — nine in 2012 and 17 in 2013.

“If convicted of a violation, and the court transmits that conviction information to the DMV, it is posted to the record,” Goheen said.

Local insurance agent Gary Albert says that reports from the DMV provide important information when determining the pricing of an insurance applicant’s policy.

“If [a bicycling violation] makes its way to a motor vehicle record as a moving violation, then insurance underwriters are probably going to take that into account,” Albert said.

University of Virginia student Ian Feeney said he received demerit points on his license for one of the tickets issued in the city last year. He failed to yield right-of-way to a pedestrian.

Feeney said there was a police officer covering the crosswalk on University Avenue near The Corner during a pedestrian safety campaign put on by the university.

“The pedestrian gave me the go ahead with his hand,” Feeney said. “The cop didn’t see, and when I passed through the crosswalk, he flagged me over.”

Feeney was found guilty and paid a $92 fine. He also had four demerit points added to his Virginia driver’s license by the DMV.

Feeney said that he did not know that the ticket was considered the same as one that would be written to the driver of a vehicle.

“I didn’t think it would lead to a ticket impact on my driving record,” Feeney said.

“Laws are what they are,” Cruthirds said. “I wish the community would do more about educating the public about bicycling in general.”

Both Cruthirds and Feeney said their biking habits have improved from the experience.

“I follow every law that I would in the car,” Feeney said. “Stop at the stop sign and use hand signals. You can get pulled over for that too.”