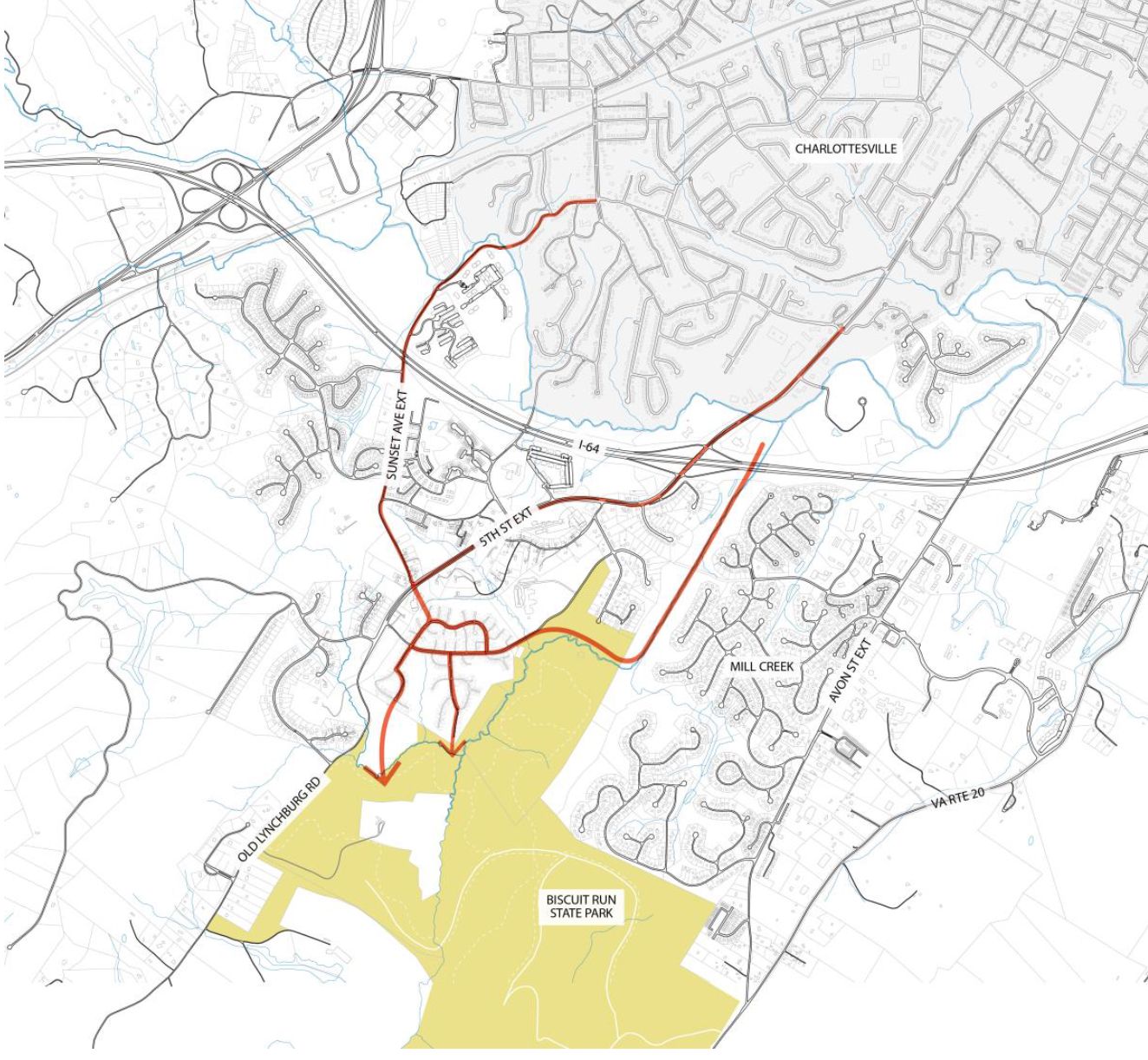 http://s3.amazonaws.com/cville/cm/mutlimedia/20150128-Biscuit-Run-Gateway.pdf New Albemarle parks face financial barriers before openingBiscuit Run State Park stalled in RichmondState kicks off Biscuit Run State Park planning effort as deal remains under scrutiny
Move would result in area’s largest pathway system
A regional transportation body has signaled early support for a Habitat for Humanity plan that would connect the future Biscuit Run State Park to Albemarle’s southern urban area with a network of bike and pedestrian trails.
Habitat has suggested that the Metropolitan Planning Organization consolidate several projects on its long-term vision list into one plan that would integrate a redeveloped Southwood Mobile Home Park into the park.
The proposal would combine several sidewalk and bike improvements on Old Lynchburg Road, Fifth Street Extended, Route 20 and the new Bent Creek Parkway into one trail system.
“The result of this strategic recombination will be the region’s largest contiguous walkable and bikeable area,” reads a draft resolution presented to the MPO last week. “This would create a northern and western gateway into the future Biscuit Run Park and through to Scottsville for all forms of transportation.”
The MPO has directed its technical subcommittee to evaluate the consolidation idea, which will return to the full policy board later this year.
“We’re getting a lot of strong comments from residents of our urban ring who are saying it is time to put park funding into the urban ring and not just way out in the boonies,” said Supervisor Ann H. Mallek, a member of the policy board.
Habitat purchased the Southwood Mobile Home Park in 2007 and has plans to redevelop it as a mixed-income neighborhood in the next few years. There are currently about 1,500 residents in 342 trailers. Habitat seeks to allow each the opportunity to stay in the community to build a new home.
Already, Habitat has invested about $2 million in infrastructure improvements at the mobile home park. The organization might seek a rezoning as early as the summer of 2016. There are nine full-time Habitat employees working on the project.
Developer Hunter Craig had won approval of a rezoning that would have allowed as many as 3,100 homes on 828 acres of mixed-use development adjacent to a 400-acre park.
But the project never got off the ground, and in January 2010, the state of Virginia purchased the land, which will become Biscuit Run State Park, from Craig for $9.8 million in cash and $11.7 million in tax credits.
Though the Virginia Department of Conservation and Recreation adopted a $42.4 million master plan for the park in October 2013, there is no timeline for when the state will be ready to open the park to the public.
Whenever that does occur, the master plan depicts that the only vehicular entrance would be from Route 20.
The Biscuit Run Gateway proposal would increase pedestrian and bicycle access to the park from Old Lynchburg Road.
“Multimodal elements of the Gateway would likely include daily parking areas for horse trailers and an enhanced network of bike and pedestrian connections through the Southwood Trailer Park,” reads the draft resolution. “These connections would then tie in to Route 20, U.S. Bicycle Route 76, Mill Creek and the proposed Heritage Trail to Scottsville and the James River.”
MPO planning staff recommended the idea as consistent with Charlottesville’s and Albemarle’s Comprehensive Plans, but a public hearing would be needed to amend the long-range transportation plan’s vision list. That will happen once the MPO Technical Committee examines the idea.
Rex Linville, a resident of Redfields and an employee of the Piedmont Environmental Council, said the plan also should connect to points north.
“That corridor could potentially connect the Charlottesville Downtown Mall with the future Biscuit Run State Park and be the next big thing,” Linville said. “It would not only be a great amenity and a transportation corridor, but it can also be an economic engine for this area.”