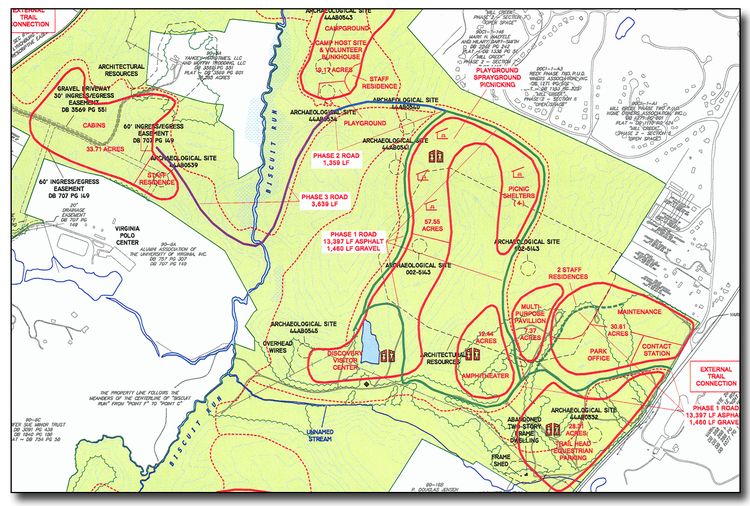 Almost two years after the Virginia Department of Conservation and Recreation completed public planning efforts for Biscuit Run State Park in Albemarle, there is no approved master plan or funding to open the park.

Department of Conservation spokesman Gary Waugh said a deadline for one of the state agency’s major documents is the cause of the delay.

“This is the year we’re issuing the Virginia Outdoors Plan,” he said.  “It’s a huge undertaking that takes our entire staff, so the [Biscuit Run] master plan was set aside while they worked on that.”

Waugh said that the Department of Conservation is hoping to ship the outdoors plan to its advisory board later this year.

The outdoors plan, the state’s recreation and conservation planning guide, allows the agency to qualify for federal land and water conservation money to acquire property for local and state parks and recreation purposes.

Waugh said the master plan was near completion and the outdoors plan will recommend that Biscuit Run State Park move forward.

“Recommendations are for development of phase one, which is basic infrastructure and some day-use facilities,” Waugh said. “There’s no time frame on that. Those recommendations are usually fairly general … because it relates to the availability of funding in the future.”

The 1,200-acre park site is located south of Charlottesville between Route 20 and Old Lynchburg Road.

Money for parks can be secured in one of three ways, Waugh said:

» A legislator can request that a project be approved during the budget process;

» the administration could add the project to the budget;

» or a bond referendum could be held.

Biscuit Run was approved as a massive housing development before its sale to the state and subsequent tax credits for the developers.

An Albemarle County Circuit Court judge ruled last month in favor of a group of developers led by local real estate investor Hunter Craig who sued the state seeking a greater valuation for the December 2009 “bargain sale” of the land.

Waugh said the lawsuit did not contribute to the master plan delays.

Habitat for Humanity wants to trade land it owns at the Southwood Mobile Home Park for land in Biscuit Run State Park, some of which Habitat would donate to Albemarle County for athletic fields.

The Department of Conservation and Habitat “have a mutual understanding of each other’s needs in any potential swap,” said Dan Rosensweig, Habitat’s executive director. “I’m confident that we’ll continue to work together to find a win-win.”