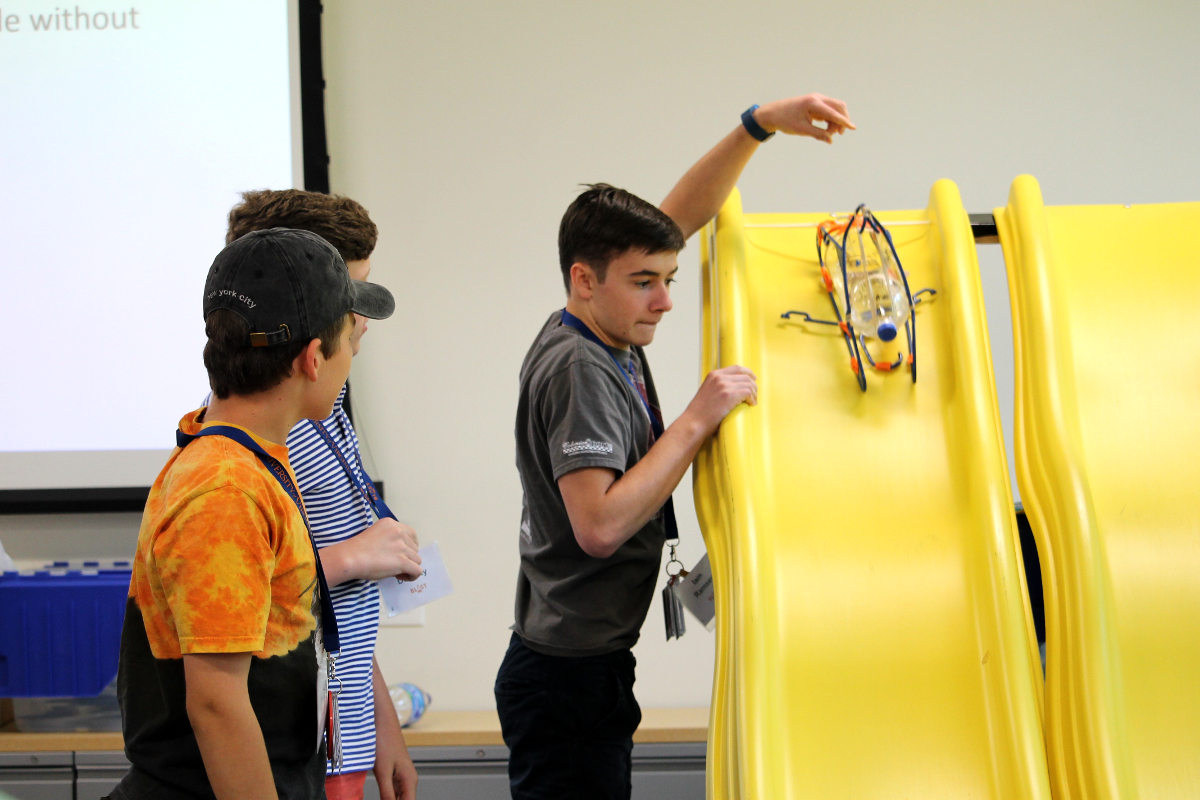 A group of high school students stands poised around an elaborately constructed slide, preparing to test a small gliding vehicle they have made completely out of garbage.

They release the vehicle, which carries an open container of water, and cheer as it successfully reaches the bottom of the slide without spilling a drop.

This activity, Trash Sliders, was one of the four engineering projects students took part in during the Building Leaders for Advancing Science and Technology summer program at the University of Virginia. Now in its fourth year, the BLAST program consists of three days of STEM activities and is held for two sessions at UVa, one session at Virginia Tech and one session at Old Dominion University.

“[The program] is a partnership between these universities and the commonwealth of Virginia, targeting students who might not have exposure to a STEM experience,” said program manager Tysha Sanford.

Sanford, who is also the STEM education program specialist for the Virginia Space Grant Consortium, credited the consortium’s director, Mary Sandy, for spearheading legislative efforts to fund the BLAST program. BLAST is free for all participants and includes meals and lodging, though families must arrange their own transportation.

“The VSGC has been incredibly generous and wonderful,” said Susan Donohue, a professor in UVa’s Department of Engineering who led a wind power activity. “It’s a very competitive program.”

This year, more than 1,000 students from around the state applied, and 80 were selected for each session. Sanford said a panel of educators reviews applications, which include letters of recommendation from teachers and personal statements from students about why they value STEM.

In the wind power activity, Donohue lectured on the value of alternative energy sources before tasking students with building the most efficient windmill they could design.

One student explained she had immediately started thinking about designs and materials that would work best during the introductory lecture. Another girl in the group said she decided to dive right into designing and test ideas as she went along.

Diane Briggs, a math teacher from Stafford who has chaperoned the BLAST program every year since it began, said she has learned to apply the same kinds of hands-on learning techniques in her own classroom. She finds the self-guided, lightly competitive style of the program to be approachable and engaging.

“This is STEM development for kids in a way that is affordable and uses materials easily accessible. You could spend $700-800 on a turbine kit online,” Donohue said. “We’re using Solo cups! But the concept still gets across.”

The concept of using affordable materials was taken to its extreme in the Trash Sliders activity.

“We want to talk about sustainability and reducing the amount of trash. I like to talk about up-cycling, making something better than before out of reused materials,” said Larry Richards, a professor in UVa’s Department of Mechanical and Aerospace Engineering. “This is all stuff I just wander around and pick up to use with the kids!”

The “stuff” Richards referred to included coat hangers, grocery bags, soda bottles, chopsticks and various other plastic objects, such as wheels and flat trays. Students worked in teams of four to construct their sliders, and then the teams went head to head to test their designs.

“We don’t tell them how to design their vehicles; they have to come up with it. The competition gets pretty intense!” said Richards. “You hope to beat everyone else, but the real goal is just to spill as little water as possible.”

After the activity ended in an exciting tie-breaking round, Richards asked the students what factors they had considered in their design. The group discussed the impacts of friction, center of gravity, area of the slider’s base and use of wheels.

Other parts of the program include a robotics project, a chemistry exploration, a visit to the McCormick Observatory, a question-and-answer session with a panel of UVa STEM students and staff and a talk from UVa professor and former astronaut Kathryn Thornton.

“Here’s a female who was able to get into space, to see that blue marble picture firsthand,” said Donohue, emphasizing Thornton as a role model for the program’s female participants in particular.

BLAST also serves an early introduction to the atmosphere and facilities of major universities.

“You might have some [students] where this is their very first time doing something like this, where they’re on a college campus, living in a dorm,” said Sanford, praising the program’s ability to introduce students to pursuing STEM fields in high school and beyond.

For many students with scientific aspirations, the program is a dream come true.