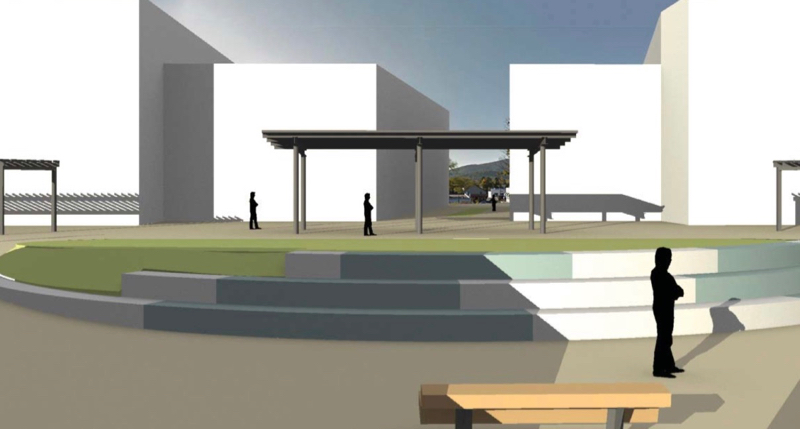 A design for a civic plaza space presented at a stakeholder meeting on April 12, 2017. The final design is yet to be selected.

As plans for downtown Crozet continue to come together, a developer is proposing Albemarle County use bonds to finance $4.72 million worth of infrastructure projects to support the area’s redevelopment.

Frank Stoner, of Milestone Partners and Crozet New Town Associates, has been working to redevelop the 20-acre property formerly home to the J. Bruce Barnes Lumber Company into what he and groups like the Downtown Crozet Initiative hope will be a vibrant downtown. The parcel is located south of the Buckingham Branch Railroad and east of The Square, which is home to existing businesses such as Mudhouse and Parkway Pharmacy.

A new report, which was prepared by Municap, Inc., proposes the developer and county split the costs of public improvements for the property, with the developer paying approximately $4.45 million and the county paying $4.72 million. The county’s costs would specifically go towards constructing a civic plaza space and a road that connects downtown to nearby Parkside Village.

The Parkside Village connector is estimated to cost $1.57 million and the Crozet Plaza $3.15 million. The report projects that the various forms of tax revenue resulting from redevelopment of the property — including real property, sales, meals, transient and personal property taxes — would leave the county with a net surplus of $18.15 million in tax revenue after the bondholders are repaid.

Stoner emphasized that the proposal is only in an initial phase and described it as “a work in progress.” The Municap report was submitted to the county last week.

Assistant County Executive Lee Catlin said in an email that the county is preparing to review the recent submittal.

“We have only just received the report from Mr. Stoner and are eager to bring the right staff people together to review and understand his proposal, we are working on that right now,” Catlin said. “While we can’t comment on the specifics of the proposal until we do our review, we appreciate Mr. Stoner’s initiative and will be giving his proposal our very close attention.”

The Barnes Lumber property is being developed in two phases, with the first phase consisting of a public plaza, as well as an anticipated hotel and mixed-use commercial and residential spaces. A second phase would create additional commercial space and housing units.

The 28,000 square-foot plaza is envisioned as a focal point for the future of downtown Crozet. The design has not yet been finalized, but some preliminary designs from the firm Mahan Rykiel Associates have included a pavilion, an open lawn area, tree groves and a water feature. The plaza space would be donated to the county or a public entity.

“The plaza is critical to the development of Phase I,” Stoner said. He sees the plaza as an important feature for attracting businesses to the downtown area and creating a lively space — but the plaza would come with a high price tag.

Stoner has also previously noted that large costs associated with developing the property could lead to high leases for businesses that may want to locate to downtown Crozet.

Infrastructural improvements for The Square, such as road, stormwater and streetscape improvements — which could cost $600,000 — are an improvement Stoner said he would like to eventually incorporate into the proposal, but he said he wanted to confirm with the county whether this would be the method by which they would want to fund The Square, which is on county-owned property.

It is currently unclear what avenue the bond financing would take in order to move forward. Stoner said he is hoping that the county’s Economic Development Authority would be able to issue the bonds and that conversations with the county about this initial draft submittal will provide some clarity on how to proceed.

The uncertainty stems in part from the proposal describing the county using “general obligation bonds,” which the EDA is unable to issue, according to Deputy County Attorney John Blair.

“The EDA may issue bonds in connection with its revenues, receipts, and/or loans,” Blair said in an email. “EDA bonds are not subject to a voter referendum.”

If Stoner wants to pursue a bonding project with the EDA, he likely would have to pursue a different kind of bond, because a general obligation bond would need to be backed by the county — which would necessitate a referendum.

“Bonds issued by a county are subject to a voter referendum, except for revenue bonds (anticipated tax revenues or revenues from a utility such as a water system), refunding bonds, and limited school capital project bonds,” Blair said.

Stoner is currently in the process of proposing a rezoning of about six acres of the property from heavy industrial to Downtown Crozet District zoning. This rezoning would be necessary to proceed with the first envisioned phase of the development of downtown and likely will go before the Planning Commission this fall.

Stoner said he would like to see a change in what is allowed by-right in the DCD zoning code before he proposes a rezoning for a second phase east of phase I.

“The reason why we’re not proposing to rezone phase II yet is because there’s a disconnect in our mind between the existing DCD zoning code and reality because of this requirement that every building have a commercial use on the ground floor,” Stoner said.