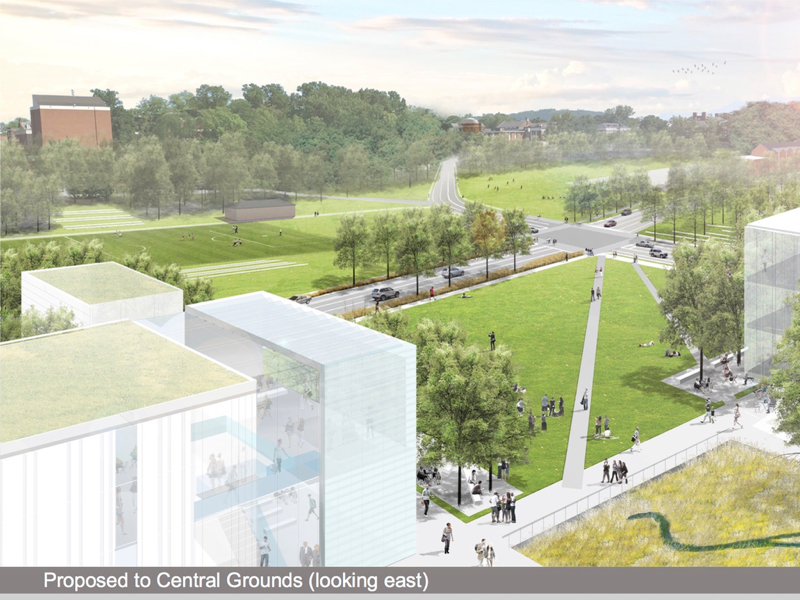 The proposal presented to the Board of Visitors calls for replacing the Cavalier Inn with an open green space at the intersection of Emmet Street and Ivy Road.

Plans are continuing to come together for the Ivy corridor near the intersection of Ivy Road and Emmet Street.

The University of Virginia Board of Visitors heard an update on proposals for the site at its retreat Monday at the Boar’s Head Inn.

“Ivy-Emmet has been an ongoing discussion in terms of what we can do to improve connectivity, improve the welcoming experiencing to Grounds and improve the transportation experience at the intersection of Ivy [Road] and Emmet [Street],” said Kevin Fay, chairman of the board’s Buildings and Grounds Committee.

In March 2015, the Board of Visitors passed a resolution for the university to undertake a planning process for the future of the Ivy corridor, a 15-acre-site currently home to the Cavalier Inn, the Emmet/Ivy Parking Garage and various other buildings.

The board previously has expressed interest in creating more green space on the site and improving the space to increase connectivity between Central and North Grounds.

Alice Raucher, architect for the university, updated board members about $12.1 million in funding the city of Charlottesville recently received from the state for streetscape improvements along Emmet Street.

The Commonwealth Transportation Board appropriated these funds in June and they must be spent within the next five years.

“The proposal that the city submitted to the state with our collaboration extends from improvements at Arlington Boulevard all the way down to the Ivy-Emmet intersection — they are primarily for streetscape, pedestrian and bicycle improvements,” Raucher said. “They also consolidate the number of University Transit Service bus stops and the Charlottesville Area Transit service bus stops and make improvements to the intersection that we’ve been focused on.”

Raucher also noted that the funding will be used to construct a shared-use path through the railroad trestle on the northern end of the corridor.

The transition issue in terms of the Cavalier Inn coming down needs to be worked out. We’re having a lot of those conversations, but I think we’re about to get underway.

A southbound right-turn lane on Emmet and revising the timing of the traffic signal are other recommendations to make the intersection more efficient.

“We are proposing to reduce the delay time by about 20 percent,” Raucher said.

Another recommendation to increase pedestrian connectivity is to create two bridge connections across the railroad track on the northern end of the site that would connect a future building and the existing garage to athletic facilities on the other side of the track.

Conceptual plans for the site call for removing the Cavalier Inn and replacing it with an open green space at the corner of Emmet and Ivy.

“If the Cavalier Inn comes down, we have the opportunity to have a community and university-focused green,” Raucher said.

Raucher described a proposed phased approach to redeveloping the corridor.

“This is Phase I that presents the opportunity to take the Cavalier Inn down, possibly build a building that screens the garage, and improve the streetscape,” Raucher said. “We could also include the bridges that connect up to the athletic precincts in this Phase I.”

Any additional redevelopment for the corridor would occur after Phase I.

“The streetscape project proceeds irrespective of what the plans are for the Ivy corridor, is that not correct?” board member Whittington Clement asked.

“Now with the grant that the city has received, I think that’s pretty much a signal to us that the train’s leaving the station and we better get on board,” Fay said. “The transition issue in terms of the Cavalier Inn coming down needs to be worked out. We’re having a lot of those conversations, but I think we’re about to get underway.”

When asked about the timeline for Phase I, Fay said he would hope to see it completed within five years, with a decision being made in December.

“I’m hoping that we can make a decision in December to begin implementation within the next year or two in terms of both the transit improvements, the timing on Cavalier Inn coming down and potentially on clearing up that space,” Fay said.

Board member Thomas DePasquale asked about future lodging space for visitors to the university if the Cavalier Inn is demolished.

Fay said discussions are currently underway about the future of lodging at the university, with options such as public-private partnerships and deals with outside hotel companies on the table.

During an update from the Buildings and Grounds Committee to the board, Fay said future plans include approving a master plan for Brandon Avenue, which will be presented in September and include sites for upperclassmen housing and a student health facility.

“It’s time for U-Hall to come down, and so there are a lot of needs there in terms of athletic department desires, but at the same time we want to make sure that it’s consistent with the work we’ve been doing in the Ivy corridor and the whole connectivity to the North Grounds.”