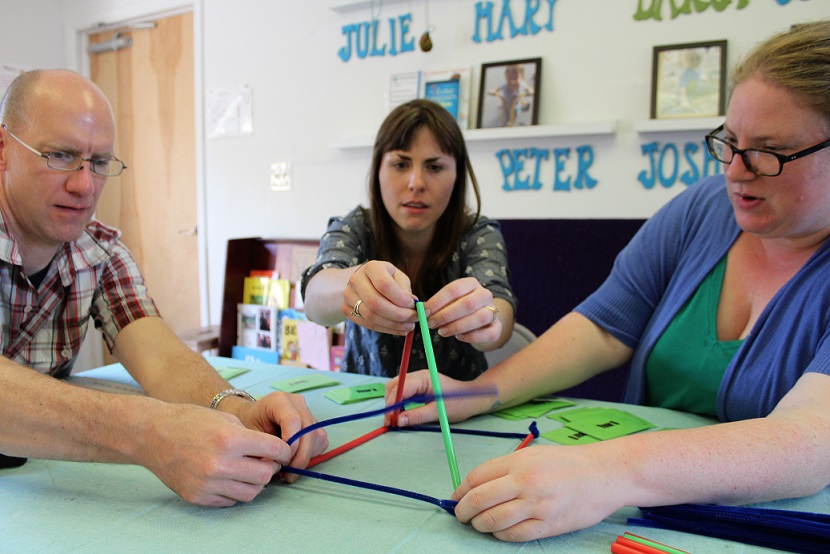 In the Brain Architecture Game, teams of four to six people build a model brain out of pipe cleaners and straws, with the goal of making it as sturdy and tall as possible. From left: Andy Slack, Julie Everett, Putnam Ivey .

A Charlottesville preschool recently invited the public to build “brains” in a game designed to raise awareness of mental development in early childhood.

Our Neighborhood Child Development Center on Ivy Road hosted 10 rounds of the Brain Architecture Game during the National Association for the Education of Young Children’s Week of the Young Child.

Jennifer Slack, executive director of the preschool, said about 40 people played the game, including Albemarle County and Charlottesville school board members.

“The Brain Architecture Game can start conversations about the importance of brain research and integrating brain research into education,” Slack said.

The game was developed in 2009 by early-childhood researchers from Harvard University, the University of Pittsburgh and the University of Southern California. It illustrates the impact of life experiences and relationships on brain development through a simple, collaborative building challenge.

Teams of four to six people build a model brain out of pipe cleaners and straws, with the goal of making it as sturdy and tall as possible. Straws represent healthy brain development by giving crucial support to the flimsy pipe cleaners.

Teams start the game by rolling a die for the “genetic lottery,” which determines the health of the brain at birth. An optimal roll of a six gives players a square base of four pipe cleaners and plastic straws to reinforce each one; rolling a one results in a triangular base with no straws to reinforce it.

Albemarle School Board member Graham Paige said his team was lucky to get a square base for its brain sculpture. “Having a good foundation at 1 or 2 years old helped [the brain] deal with traumatic events years later,” Paige said.

A second dice roll — the “social support lottery” — determines how many straws the team can keep in reserve. Materials for brain development are allotted with “life experience cards,” which are drawn at random. Each round of card-drawing and building represents a year of a child’s life.

Positive experiences — such as having a supportive caregiver, or making friends in a close community — give the brain a pipe cleaner and a straw.

Causes of toxic stress — such as severe neglect or domestic violence — give the brain a pipe cleaner without a straw support.

Other life events in the Brain Architecture Game — such as the separation of the child’s parents or hospitalization from an injury — are categorized as “tolerable stresses.” With luck and prior support, these events won’t have ill effects.

“Most stress is tolerable … all it takes is social support,” Slack said.

“You could really see how some incidents really need to be taken into account as we develop curriculum and programs for kids,” Paige said. “They may not sound traumatic … but to a developing brain, they can have tremendous impact.”

Between ages 6 and 8, no more straws are allotted. Positive experiences bring pipe cleaners, while toxic stresses force players to hang 10-gram weights on the brain that can topple the structure.

If the brain has undergone more negative than positive experiences at this stage of childhood, otherwise tolerable stresses manifest as a harmful weight.

“It makes you realize that starting interventions in third grade could be too late,” Slack said.

“Sometimes, it could be really hard for students to overcome problems that happened when they were young,” said Paige. “Schools and social services wouldn’t erase the effects.”

“It’s important to think about what we have to do as a society to support young children and families — to be a ‘straw’ for them,” Slack said.

Julie Everett, a teacher at the preschool, took part in the final game of the week on April 28.

Unrelenting toxic stress limited the height of Everett’s brain sculpture, but her team’s clever arrangement of pipe cleaners on a sturdy foundation allowed it to hold up more weight than any brain that week.

“Our life experiences become a part of who we are,” Everett said. “They kept this brain standing, in kind of a wonky way.”