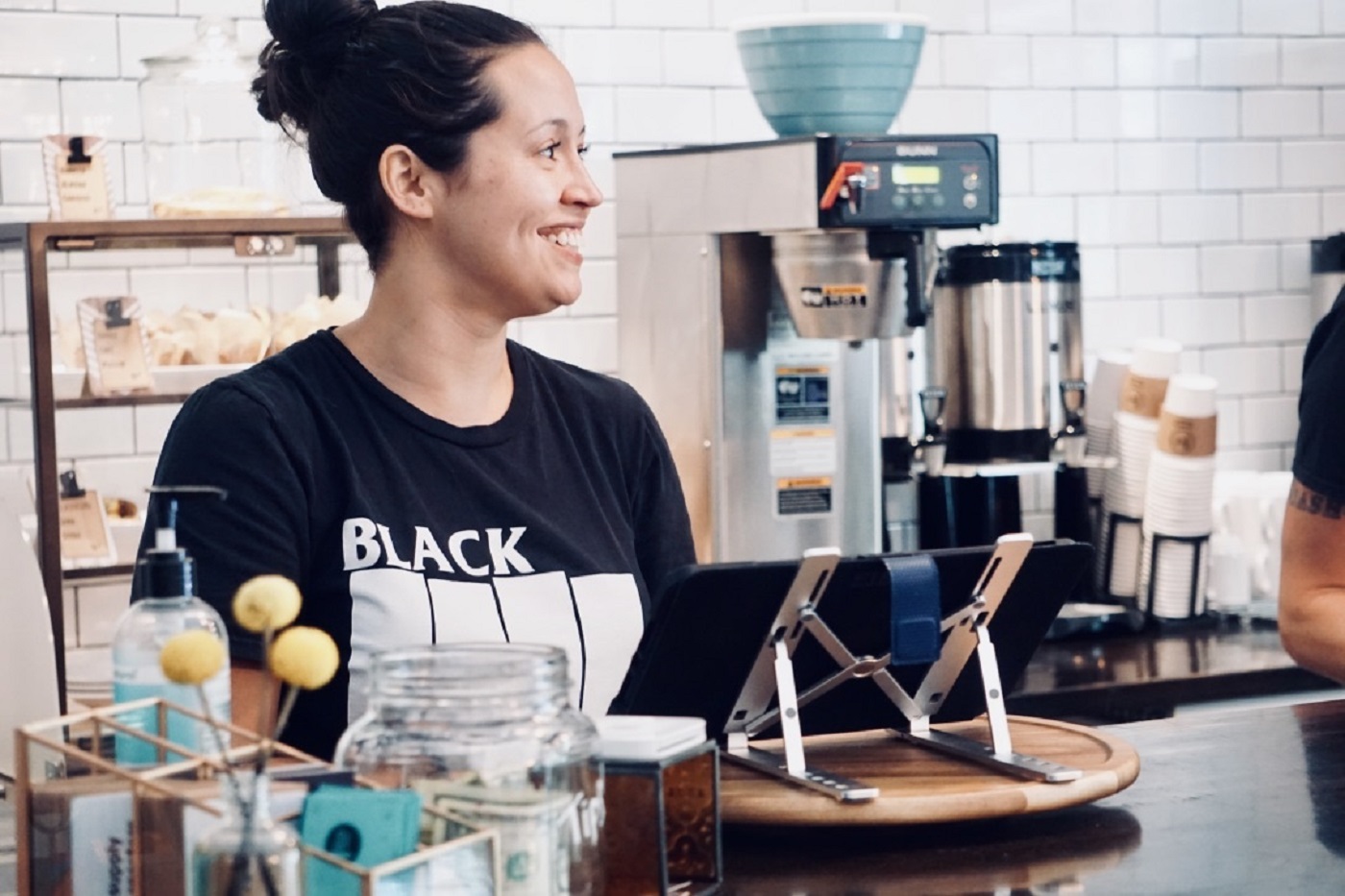 Cheryl Mora Robison greets guests with a smile as she serves them up freshly brewed coffee.

On a sunny Monday morning, Cheryl Mora Robison sits outside her coffee shop before the morning rush. Fresh-faced with her thick brown hair pulled up into a bun atop her head, she has just returned from a run.

Cheryl grew up in Sterling in a multicultural family, her father with Navajo and Mexican American and her mother white. Growing up, people would always assume Cheryl’s ethnicity, at times causing her to feel othered.

At 16, Cheryl met her husband, John, while working at a coffee shop. Serendipitously, she and John now own the popular JBird Supply and coffee shop at IX Art Park.

Cheryl studied sociology at Virginia Commonwealth University and later began her career in Richmond focusing on sexual and domestic violence. She fell in love with Charlottesville after a few business meetings for the Virginia Sexual and Domestic Violence Network. Soon after, she relocated to the area with John.

Cheryl landed a position as a social worker for the city and moved up in leadership over the years. During this time, her husband John managed Starbucks and Shenandoah Joe stores but transitioned into working at a nuclear pharmacy before deciding to learn how to roast coffee from home.

“My husband had been out of coffee for a minute and was itching to do something, as men will sometimes do. And he decided to teach himself how to roast coffee.” Cheryl shared. “And so we bought this little roaster that we put in the garage. It only roasted about 2½ pounds at a time. We started with one farmer’s market on Sundays, and one market turned into two, and two turned into three.”

Demand grew so heavily within a year and a half that John was able to leave his full-time job to focus fully on JBird. On the other hand, the decision to leap into entrepreneurship was not so easy for Cheryl.

Cheryl hit a crossroads in February 2020 when she learned she was eligible for promotion while also being offered the studio café at IX Park. The café needed a little sprucing up but included the necessary equipment the couple needed to serve coffee, which eliminated large overhead expenses.

“It took so much to let go of the security of a career and the security of insurance and a pension. All of these grown-up things that I’m supposed to have and supposed to hold onto,” Cheryl said. “I loved the work, I loved fighting for families. I wanted both, and I couldn’t continue to do both. There weren’t enough hours in a day. It kind of felt like now or never.”

On Valentine’s Day 2020, Cheryl left her job in social work to focus on her business. JBird Café opened in March 2020 and shut down five weeks later due to the pandemic.  Cheryl pulled from her pension to cover minimal costs at the start of the quarantine.

“We didn’t pay our mortgage for like two months, we had to make it up later. Just little things like that, how do we get to tomorrow? But we’re not afraid to hustle,” she recalled. 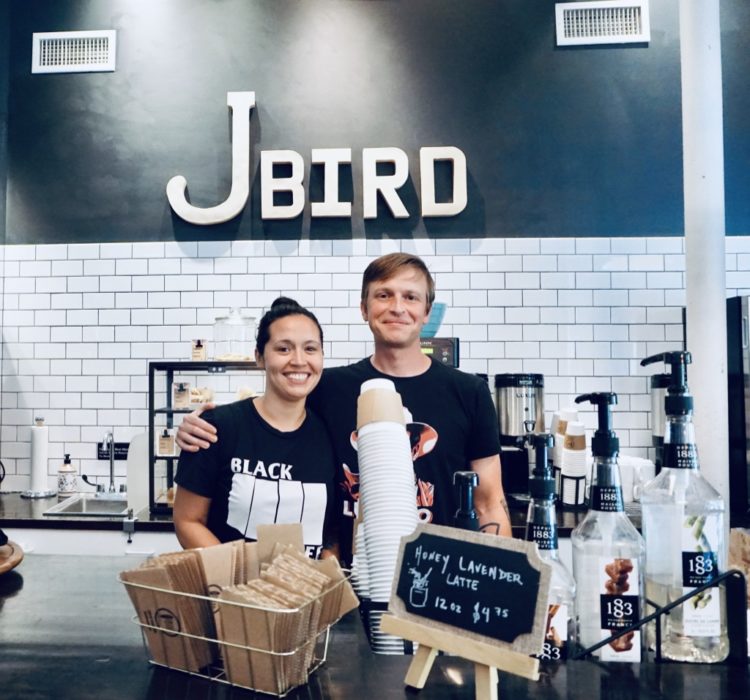 John and Cheryl behind the counter at their coffee shop in IX Art Park.

After a while, Cheryl recognized that her family needed to pivot their business plan. She sought new ways to make sales by promoting JBird on Instagram and providing free delivery in the city and Albemarle County for coffee beans. Cheryl made the deliveries personally while her husband continued to brew coffee out of the garage.

The couple followed state guidance as they waited patiently to reopen. However, the pressures of being new business owners weighed on them.

“We just did it together. We tried to have a lot of structure in the beginning but then, very quickly, it turned into let’s just take care of each other,” she recalled.

While dealing with the stressors of leaving her job and becoming a business owner, Cheryl found ways to handle the strain and balance her work and home life. As an early riser, she found peace in the quiet of early mornings. She also sets aside time on Tuesday mornings for her son as part of her routine.

“I just started to make the most of the moments and not necessarily trying to be on somebody else’s schedule. Just making the most out of the times that I do have when I’m not working,” she shared.

Cheryl also found solace in community. As a member of Prolyfyck Run Creww, Cheryl runs every Monday, Wednesday, and Friday from 6 to 7 a.m. Cheryl began running with the group in June 2020 and has been consistent each week.

As a woman of color, Prolyfyck has helped Cheryl find her voice while the death of Ma’Khia Bryant encouraged Cheryl to take up space. She found solidarity within the group to center women of color.

On May 8, Cheryl led a Prolyfyck run in honor of missing and murdered indigenous women.

“It’s not about me, but it is about us. As women of color in this space trying to make sure that we are seen, heard, represented, and visible while running for our resilience,” Cheryl said.

JBird has grown since the beginning of the pandemic. The coffee shop now has five employees and is open daily. Cheryl shares that she and her husband are happy with the growth of the business over the past year and are still learning how to be business owners.

She also acknowledges that their café is located near low-income housing. Cheryl and her husband would like to do more within these communities and provide jobs for those who live there.

“I don’t want to take over the world, I just want to be able to pay my bills, spend time with my family and be happy,” Cheryl said.  “I just want to create a space that’s not only welcoming for customers but also employees and trying to do what we do as best we can.”