Bringing students’ cultures into the classroom 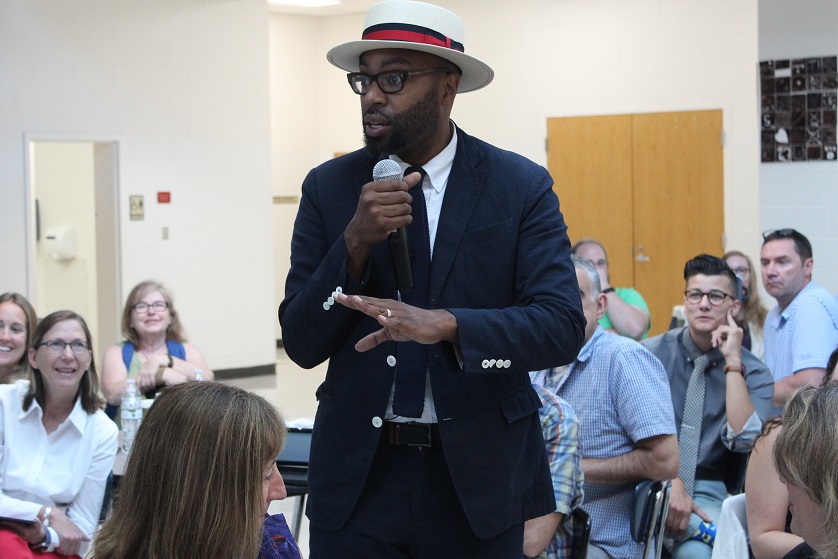 How can teachers reach across the dividing lines of race, class and culture?

On Thursday, a minority education expert advised teachers with Albemarle County Public Schools to check their biases, have honest conversations with their students and not be afraid to reveal themselves.

“The piece of you that is the most vulnerable and the most raw and unpolished is actually the anchor of your effectiveness,” said Chris Emdin, associate professor of science education at Teachers College at Columbia University.

The Albemarle division invited Emdin to speak at its summer leadership conference at Monticello High School.

“[Emdin] is a radical leader for kids who sometimes get lost, left behind and alienated in schools all over this country,” Superintendent Pam Moran said. “We are far from being where we need to be in the work we do with our young people, particularly our black males.”

In the 2016-17 school year, Albemarle’s white male seventh-graders passed Standards of Learning tests for math and reading at rates more than 30 percent higher than their black male peers.

According to African American Teaching Fellows, a local nonprofit, only one in 10 teachers in Albemarle and Charlottesville is African-American.

Culturally responsive teaching is a major focus of Emdin’s latest book, “For White Folks Who Teach in the Hood … and the Rest of Y’all Too.”

“When you are consistently confronted with a school structure that sees your authentic self as problematic, you make choices [based on that],” Emdin said.

Emdin’s presentation began with an introduction from actor Derek Luke, who plays a high school guidance counselor in the Netflix series “13 Reasons Why.”

Luke said he is inspired by Emdin’s paradigm for education.

“Education is not memorization. It is the activation of the imagination,” Luke said. “If that becomes a nationwide curriculum, I think that most of our problems will go away.”

Emdin said he sparked his students’ interest in biochemistry when he taught in middle and high schools by having them write raps about DNA. He currently moderates a weekly Twitter conversation with the hashtag #HipHopEd.

“There is a misconception that focusing on culture of young people means you are lowering expectations,” he said.

Emdin encouraged Albemarle teachers to play clean versions of hip-hop songs in their classrooms and to allow students to move, tap on their desks and even dance.

“We fail to recognize the emotional connection that young folks have to the music they consume,” he said. “Music and rhythm and beats historically have been therapy for [African-Americans].”

Emdin said teachers working in black communities could earn their students’ respect by dressing well and developing an individual fashion sense. He singled out a few male teachers in the audience and complimented their hair and clothes.

“If you don’t have ‘swag,’ you can’t teach someone who looks at swag as [social] currency,” he said.

When he worked in public schools, Emdin formed a personal “teaching advisory group” by selecting representatives from different social cliques that he observed in his classes.

“When you create the conditions for young people to tell the truth, and they tell you the truth, you have to be humble enough to listen,” he said. “The best professional development you can ever receive is feedback from young people about your practice.”

Paloma Alvarado, a senior at Monticello, said her classmates have incorrectly assumed that she is an immigrant with limited English fluency. She said teachers have underestimated her academic ability, as well.

“I’ve been lucky enough and, honestly, brave enough to go up to my teachers to make connections with them. Because I know exactly what they are going to label me as,” Alvarado said.

Emdin said students should not have to convince teachers of their self-worth.

“We should all feel like we failed them, if that’s what they say about us,” he said.

Donna Evans, a visual arts teacher at Jack Jouett Middle School, said Emdin succeeded in showing teachers things they can do to engage all of their students, regardless of their background.