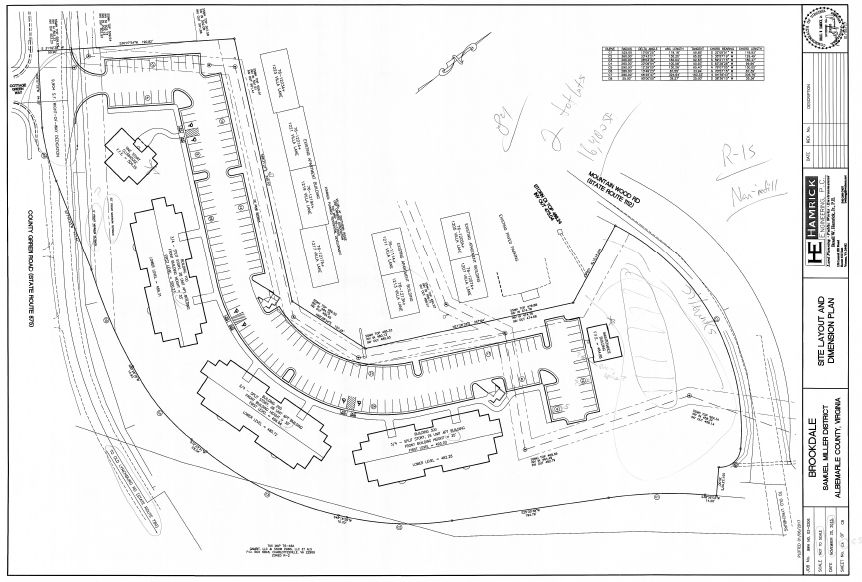 Brookdale will have a total of 96 affordable housing units

The Albemarle County Board of Supervisors has pledged financial support for 96 apartments that must be rented to low-income families.

Supervisors endorsed a performance agreement Wednesday between the county, the Albemarle Economic Development Authority and a subsidiary of Pinnacle Construction for a project called Brookdale that will be financed by bonds and tax credits.

“Financing for the project has been obtained through the issuance of $11 million in tax-exempt bonds through the county’s economic development authority, as well as low-income housing tax credits,” said Ron White, the county’s chief of housing. “This financing requires that there be rent restrictions and income restrictions on the property.”

The terms of the agreement require the units to be occupied by families whose annual income is less than 60 percent of the annual area median income (AMI). That figure is currently $76,600 a year.

“The reality is that the income is only one part of it,” White said. “Household size has to be taken into consideration, and income from all sources has to be included.”

The restriction would be in place for a period of 30 years.

William Park, president of Pinnacle Construction, has worked on other projects that utilize Virginia Housing Development Authority and U.S. Department of Housing and Urban Development programs to finance apartment complexes.

“We have to find these programs and get them to work together, and that’s not easy sometimes,” Park said. “Affordable housing means a lot of things to a lot of people.”

One of those projects is Treesdale Park, which uses tax credits to help subsidize 88 units on Rio Road East for those making less than 60 percent of the annual median income.

The county agreed to support the project with a roughly $71,000 annual payment for the next 15 years, a figure that would be phased out over an additional five years.

“The requested financial assistance to support this development is an annual amount equal to the amount of taxes paid on the increased valued associated with the development,” White said. “It comes out to about $530 per year per unit.”

White said a similar request was made in 2000 for the construction of the Wood’s Edge senior living facility near Charlottesville Fashion Square mall.

The performance agreement does not absolve Pinnacle from paying county property taxes.

Park said he will not ask the Albemarle County Service Authority to waive water and sewer connection fees. He estimates that will be about $650,000.

The project would be built on undeveloped land on Country Green Road in Albemarle’s southern growth area. The property’s existing zoning allows for up to 15 residential units per acre, but the project will receive a density bonus of 12 additional units.

Some supervisors had concerns that the project will not be directly served by a regular transit route. The nearest bus stop is currently about a fifth of a mile away, and there is no sidewalk to Fifth Street Extended.

Supervisor Rick Randolph suggested that the county should instead invest in Habitat for Humanity of Greater Charlottesville’s planned redevelopment of the Southwood Mobile Home Park because that is already on Charlottesville Area Transit’s Route 3.

“For affordable housing like this to be successful, transportation is a key component,” Randolph said. “We have assurance of buses being available [at Southwood], versus this location.”

However, Supervisor Ann H. Mallek pointed out the primary risk is being taken on by Pinnacle Construction and the economic development authority, and that the county’s financial support would provide more options for nearly a hundred low-income households.

“I would support getting the bus there and getting a sidewalk there pronto, but the fact that we would have 96 units available to people who are on the 60 percent AMI range is huge,” Mallek said.

Supervisor Liz Palmer reminded her colleagues that there are many more residential units coming to the general area, including Timberland Park and Fifth Street Place.

“We need infrastructure in this area,” Palmer said. “There is a whole lot of building going on in this area of multi-unit apartments and affordable housing and all kinds of things. This is the perfect place for another bus stop, but that’s an expense.”

When asked if the project would result in more students in the county school system, Park said he felt the tenants will be existing residents who move to a more affordable situation.

“The majority of the people who will be living there are people who live in the area anyway,” Park said. “So more than likely you’re already providing most of these services.”

Palmer said she was initially opposed to the project but changed her mind. However, she wanted to establish a policy that governs when county resources are used for affordable housing projects.

Park said the county should remain flexible if it wants to increase its affordable housing stock.

“The more you leave it up to the nonprofit and private sector to try to put all these things together, as you forward try not to make it too prescriptive or you’re going to box yourself in where you can’t use some of these programs,” Park said.