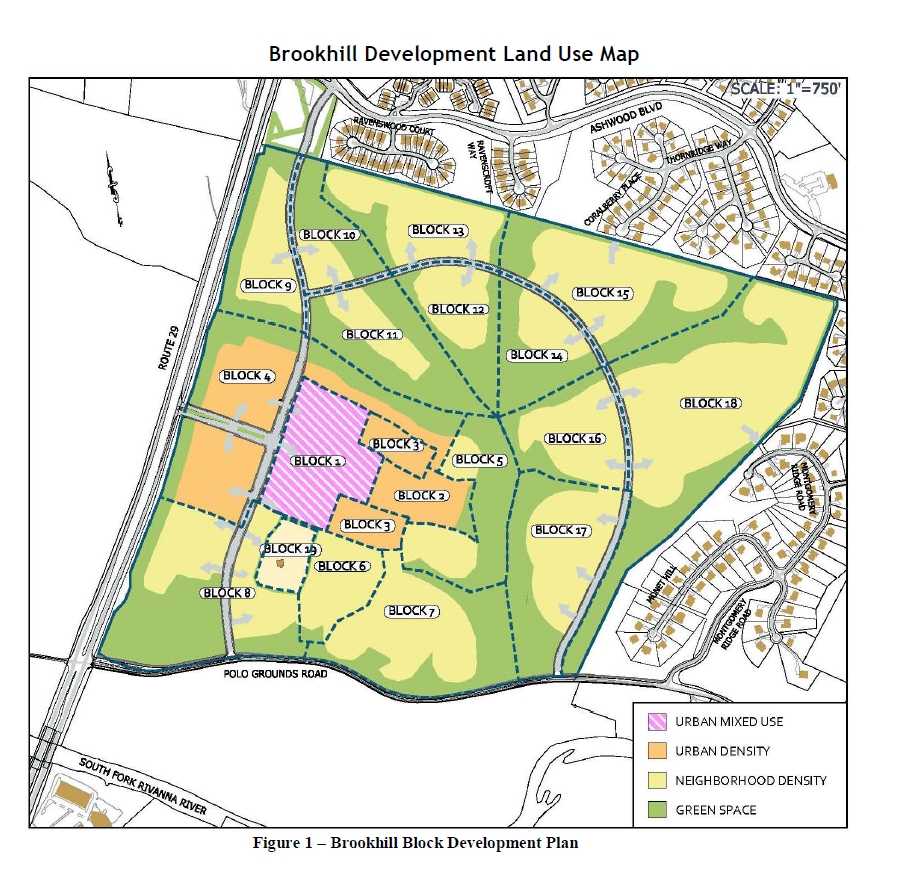 Map using the blocks for the Brookhill development

The Albemarle County Board of Supervisors has approved the Brookhill mixed-use development between Polo Grounds Road and the Forest Lakes community.

“Over the last two years, our team has worked collaboratively with county staff and surrounding neighborhoods by understanding goals, listening to concerns and updating our proposal to fulfill the vision set forth in the Comprehensive Plan,” said Ashley Davies, of the law firm Williams Mullen.

Davies represents Riverbend Development, the company that will build Brookhill.

Their request was to rezone 277 acres from single-family residential to the county’s Neighborhood Model zoning. That would allow for between 800 and 1,550 residential units and a maximum of 130,000 square feet for commercial use.

“They are proposing lots of open space, parks and multimodal transportation areas,” county planner Megan Yaniglos said. “They are also proffering an elementary school site. Street connections include two connections at Polo Ground Road, one at Ashwood Boulevard, one on Route 29 and one connecting to the Montgomery Ridge Subdivision.”

Riverbend also will provide a site for a future high school across U.S. 29.

However, the rezoning was opposed at Wednesday’s public hearing by many nearby residents concerned about increased traffic despite Riverbend’s promise to build $2 million in improvements to Polo Grounds Road.

“There is no way Polo Grounds Road can be transformed into the primary ingress and egress point for a small city of 5,000 residents jammed into a 277-acre tract,” said Maggie Van Winkle, of the Montgomery Ridge neighborhood. She insisted the development should have a traffic signal at its main access point with U.S. 29.

However, the Virginia Department of Transportation is currently overseeing a widening of U.S. 29 from Polo Grounds Road to Hollymead Town Center, and those plans do not include a new traffic light.

“We find that the overall roadway network is safer with the right in, right out,” said Joel DeNunzio, the administrator of VDOT’s Charlottesville residency. “Route 29 is a corridor of statewide significance and we are required by the Commonwealth Transportation Board to look at other options before we get approval for a signal. We have other options that work better here.”

As part of the rezoning, supervisors also had to authorize construction of a road on county property so the connection to Ashwood Boulevard could be made.

“This connection is supported by both the Comprehensive Plan and the Places29 Master Plan,” Yaniglos said. “It meets [a] strategy within the … plan by providing connectivity in the development area.”

Riverbend had offered to build a trailhead on the county property to provide public access to trails within Brookhill, but that idea was rejected by supervisors at the request of members of the Forest Lakes neighborhood.

“Our trail system is a private trail system and [Brookhill] trails are a public system, so we really don’t want a parking area where people can park and possibly come into our subdivision,” Forest Lakes resident Steve Liberman said.

“That means getting out of your car and walking to the places you need to go,” Taylor said. “The town center we are proposing is similar in size and scale to a block of the Downtown Mall. This is not a regional shopping center with a big parking lot that fronts onto U.S. 29.”

Taylor said the town center will be powered with a megawatt of solar energy.

“With a steady population increase since 1960, Albemarle County carries the responsibility to ensure that the growth areas develop pursuant to the Comprehensive Plan,” Davies said. “Otherwise, the priceless character of rural areas will be destroyed by premature development, an action we cannot undo.”

Several members of the public asked for supervisors to postpone their decision while their traffic concerns could be better addressed. One person submitted a petition with more than 500 signatures of people calling for the delay.

“We all understand that this development is in the development [area] and it will have something on it sooner or later,” Lettie Bien said. “The neighborhood model does not work when its projected build-out is up to 20 years. And once this is upzoned, there is zero guarantee Riverbend will build this. They can turn it around and sell it.”

However, supervisors opted to move forward with a 5-0 vote. Supervisor Brad Sheffield was not present.

Supervisors also discussed whether the road connection to the Montgomery Ridge would be made available to vehicles.

“You would actually build the physical road connection to the full road standard, but you would then put bollards at the property line so traffic would be limited to emergency vehicles, pedestrians and bicycles,” said Mark Graham, the county’s community development director.

However, supervisors opted to allow the road connection to be built and opened to vehicles.

“My experience with interconnectivity between neighborhoods has been very positive,” Supervisor Diantha McKeel said. “Even though folks didn’t like it and were worried about, it has become a huge positive. I would prefer not to put those bollards up.”