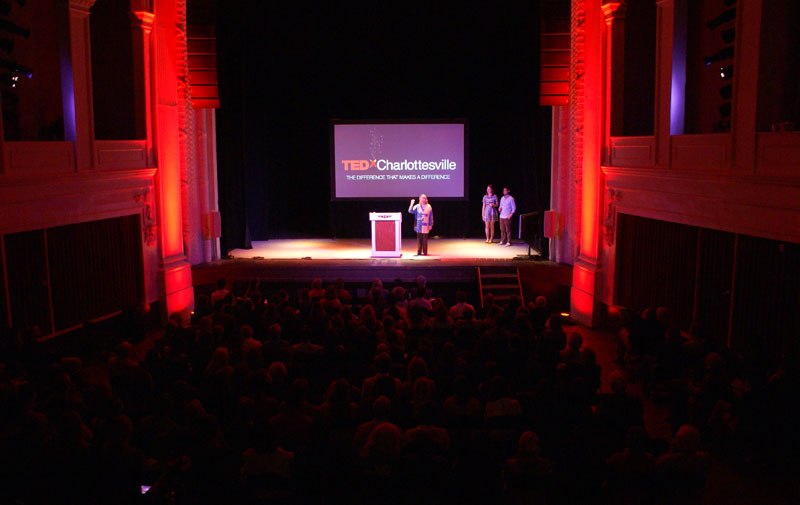 Open mic night at the Jefferson Theater for TEDx Charlottesville

Twenty-nine community members gave their best at an open mic night on Monday to earn a chance to perform at the upcoming TEDx Charlottesville event.

The two-minute talks had titles ranging from “What is Magic?” to “Innovations in Housing for Seniors” and “Autism and Love.”

There are already 15 speakers confirmed for the main TEDx Charlottesville event to be held in November, a lineup that includes University of Virginia professors, business founders and the director of the Charlottesville High School Orchestra.

The open-mic night was held because TEDx organizers wanted another local speaker for the main event.

“We wanted to have some more local connections in our lineup, because this is the first TEDx event in Charlottesville,” said Jackie Knight, director of marketing of TEDx Charlottesville. “We felt like there is so much talent in the town we hadn’t tapped into it yet with the other 15 speakers.”

TED is a nonprofit organization that started 25 years ago by hosting a conference for leading thinkers to discuss each other’s ideas. TEDx, where the “x” means independently organized, is an initiative to bring this kind of experience to smaller communities.

“The purpose of TEDx is toro create a space for people to spread their ideas and knowledge,” Knight said.

Darius Nabors was Monday’s winner, with his talk “A New Take on the Bucket List.”

Nabor told the audience about his experience with a “quarter-life crisis,” as he approached the age of 30, and his presentation was punctuated by widespread laughter.

After he found the process of making a bucket list depressing, Nabor decided instead to move on to a list inspired by somewhere he’s always wanted to go — Phuket, Thailand.

“I cannot go to Thailand every week,” Nabor said. “So I had to come up with some things more reasonable, like going on a hot-air balloon ride in Charlottesville or going skydiving, ’cause that’s what I can afford.”

Another item on his list is to wear 100 wolf-themed T-shirts. He wore one of these in “TEDx red” for the open-mic competition.

“When else am I going to talk in front of a group of strangers in a wolf shirt?” Nabor asked.

After all of the participants had offered their humorous, thought-provoking, or inspirational ideas, the audience chose Nabor as their favorite through a text-voting system.

Some candidates used the time to tell the audience about their passions.

Kim Wilkens talked about how to get girls interested in technology and her local organization Tech Girls. Hawa Ahmed, a low-income student at UVa, discussed why universities should invest in students like her.

There was a strong turnout at the Jefferson Theater, and during breaks the audience was engaged in conversations about what they heard.

Jean Fradianni was there to gain new insights from the Charlottesville community.

“It is great the event was provided for free, so we can all come together and hear our fellow neighbors’ original thoughts and ideas,” Fradianni said.

Tickets are on sale for the TEDx Charlottesville event, titled “The Difference that Makes a Difference,” which will be held at the Paramount Theater on Nov. 15.