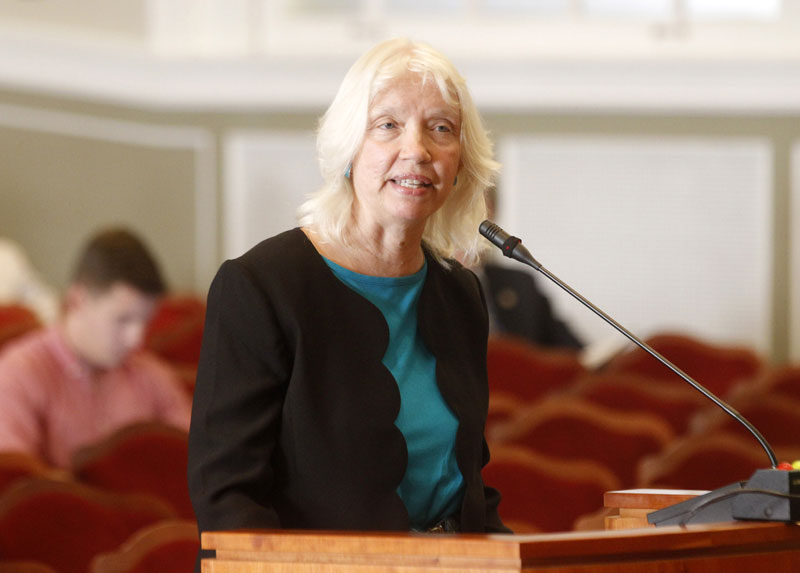 Cindi Burket speaking to the Albemarle Supervisors in July 2013

Phillip Seay officially launches campaign for Albemarle Board of SupervisorsIn race for funds, Democrats lead in Albemarle, Republicans in Charlottesville

Cynthia L. “Cindi” Burket will be the Republican Party’s candidate for the Scottsville District seat on the Albemarle Board of Supervisors. The Nov. 5 election is being held to fill the unexpired term of Democrat Christopher J. Dumler, who resigned June 5.

Burket, 60, is the past chairwoman of the Albemarle County Republican Committee, a position she relinquished as part of her decision to seek elected office.

“I am excited to be doing this,” Burkett, of Glenmore, said Monday.  “This is part of a special election, and that makes it unique.  I would consider it a huge honor to finish the last two years of Chris Dumler’s term.”

Earlier this month, Burket was one of 10 candidates who sought an interim appointment to the district seat.  On July 10, the board chose Petie Craddock, a former planning commissioner.

Craddock is not running in the special election.

Steve Janes, vice chairman of the Albemarle Republicans, said he has worked alongside Burket for nearly two years while she served as chairwoman.

“She is a wonderful person to work with and a great consensus builder,” Janes said.  “I think she will be a great candidate for Scottsville.”

Janes said the party canceled its mass meeting to select a candidate when Burket was the only person to seek the party’s nomination.

Burket moved to the area in 1997.  She has a bachelor’s degree from Penn State University and a master’s degree from George Mason University, according to her application for the interim position. She is married to her husband of 36 years, Roger, and they have a son who graduated from Albemarle High School in 2001.

Burket, who is primarily a homemaker, became involved in the local Republican Party about 10 years ago.

“I will approach each issue with common sense and clear thinking, and the most important thing is for people to know this isn’t about politics,” Burket said.  “It’s about local issues where partisan politics doesn’t come into play as much.”

Burket said the issues that would need her immediate attention included the update of the county’s comprehensive plan, education, the new law enforcement firing range and the environment.

“Economic growth should be a number one priority for the area,” Burket said.  “We always have to look to the future despite our already low unemployment rate.

“Albemarle needs to be friendly to businesses and respect the environment,” she added.  “I also think the comprehensive plan needs to not be so inflexible in the present that it compromises commons sense thinking at the daily level.”

“We need to tweak [the design] we’ve got, make it work as well as it can, and protect as many of our citizens as we can while moving forward,” she said.

Representatives of the Albemarle County Democratic Party could not be reached for comment.  Democrat Ann Mallek, Board of Supervisors chairwoman, said she did not know who the party would be nominating to oppose Burket.

Three other Albemarle supervisor seats are on the ballot as well.

The Jack Jouett District seat is being vacated by the retiring Dennis S. Rooker.  Two independents are competing in that election, Diantha McKeel and Phillip Seay.

The deadline for candidates to qualify to be on the ballot for the Scottsville special election is Aug 16.  Albemarle Registrar Jake Washburne said Monday that no independent candidates had come forward.

Burket’s formal campaign announcement will be Wednesday at 10 a.m. at the Albemarle County Office Building.