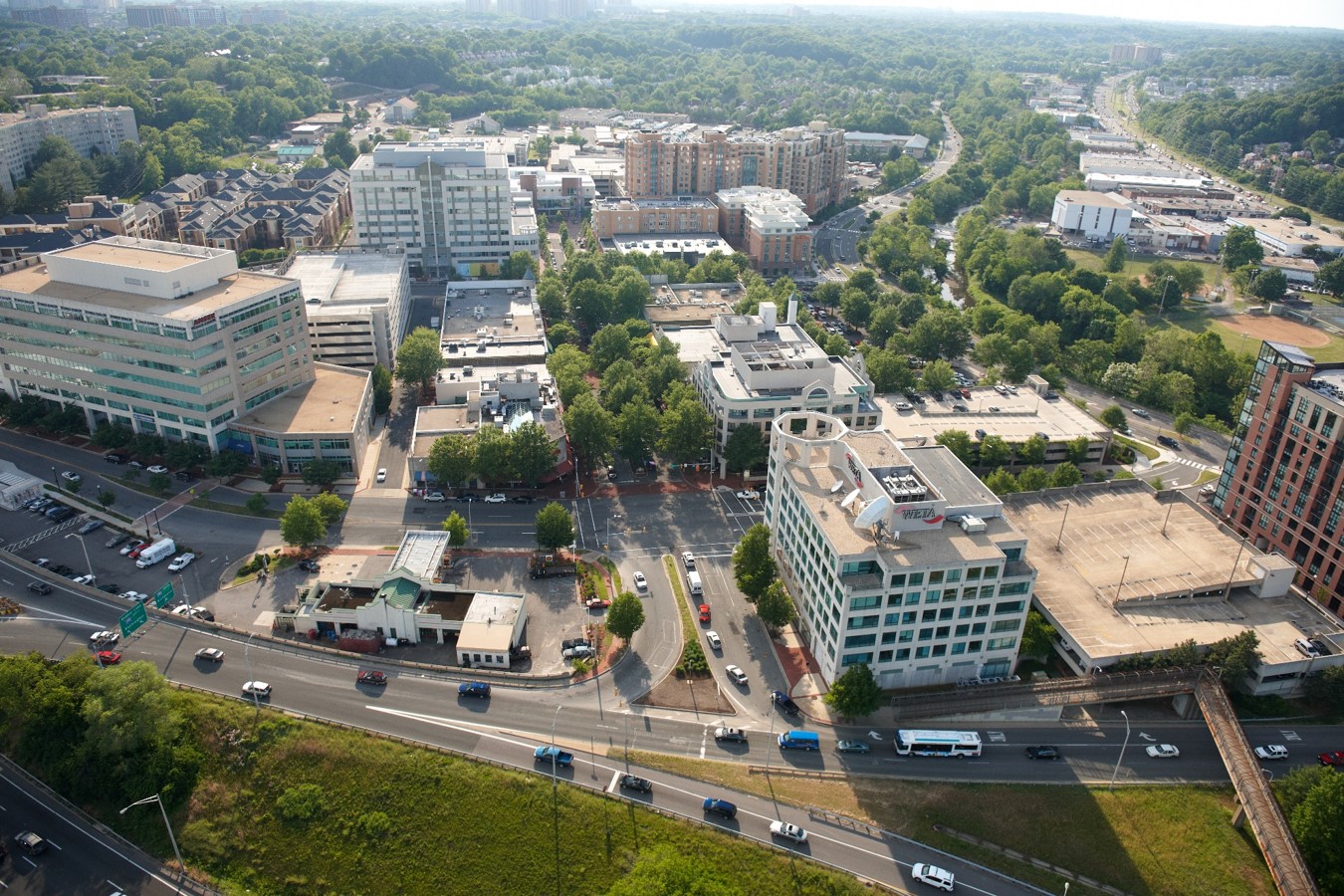 The Village of Shirlington as seen today

As Albemarle seeks to redevelop commercial sections of U.S. 29, an urban planner from Arlington briefed the business community Wednesday on how a public-private partnership helped convert a subur-ban shopping center into a New Urban community for the 21st century.

“The transformation of Shirlington illustrates that suburban communities can build efficient, walkable, mixed-use communities to address an increase in density and transit accessibility,” said Thomas Miller, a principal planner with Arlington County.

Miller was a guest of the North Downtown Business Council, a group formed in 1993 to fight against grade-separated interchanges on U.S. 29. The NCBC became part of the Charlottesville Regional Chamber of Commerce in 1998.

A 2007 Workplace29 report conducted by the Chamber’s Free Enterprise Forum studied the economic impact of the road to Albemarle.

“This corridor from Barracks Road to Airport Road is home to more than 20,000 jobs,” said Timothy Hulbert, president of the chamber. “Over the years, we’ve focused on making sure the corridor stays acces-sible and stays as beautiful as it can be.”

The NCBC went relatively dormant following a decision in 2014 to move forward with a grade-separated intersection at Rio Road and U.S. 29 instead of the Western Bypass, but the group is now renew-ing its efforts to monitor plans to reconfigure the intersection of Hydraulic and U.S. 29.

“It’s our Main Street, and we want to protect that,” said Jim Dickmen, an Advance Mills resident who is now chairman of the NCBC. “We seek robust and continuing beautification of a renewed Seminole Trail. We look forward to enhanced local business economic development.”

Miller’s talk comes at a time when small-area plans are being developed at both Rio Road and Hydraulic Road’s intersections with U.S. 29.

Additionally, the firm Stantec is studying potential scenarios for how a public-private partnership might work to redevelop land around the Rio Road intersection. One possible scenario involves moving the county courts or administrative departments into a new building along the road to spur economic development.

The Village at Shirlington is located at the southern end of Arlington County, adjacent to Interstate 395. The shopping center opened in the 1940s but had begun to fall on hard times in the 1970s as indoor malls began to spring up in the Washington, D.C., area.

“There was more competition, and Shirlington started to fade,” Miller said.

An expansion in 1980s added more retail space and a movie theater but no residential units. Restaurants began to crop up on a Main Street that traveled through part of the property.

In 1995, the property was purchased by Federal Realty Investment Trust, the same company that now owns the Barracks Road Shopping Center in Charlottesville.

Federal Realty entered into a public-private partnership with the county to create and implement a phased development plan that involved extending Main Street. Since then, acres of parking lots and a big-box store have been replaced with five residential buildings, two parking garages, a 142-room hotel, 42,000 square feet of retail space and a 195,000-square-foot office building.

To make it happen, Arlington County donated 2.4 acres of nearby land it owned, and it contributed $5.5 million toward construction of a building to hold both a public library and a theater. The nonprofit Signature Theatre group raised another $10 million.

Federal Realty took care of building the infrastructure, such as the curb and gutter and utilities. The terms of the agreement also required utilities to be placed underground.

Today, Miller said Shirlington has become a walkable community connected to nearby single-family neighborhoods that welcomed pedestrian linkages to amenities such as the library. The headquarters of WETA Public Television also is located there. A county dog park is also a huge attraction. While there’s no Metro stop, there is a bus station.

“Shirlington provides a successful example of a vibrant mixed-use core for low-density car-oriented communities,” Miller said. “None of the parties involved suggested it was easy because it was not.”

Miller said there were a number of tensions and conflicts all the way, though the many different stake-holders built trust as they worked toward redevelopment.

“Everyone took a calculated risk that required a continuing commitment to make it work,” Miller said. “People knew you had to adapt, and if you didn’t adapt and you’re not going to change, things are not going to improve.”

Miller also said partnerships are also more likely to be successful if the public entity is working with just one private developer.

Miller said many people fear density without understanding the benefits it might have.

“Density can come in many shapes and forms, but if it looks good, you have a greater chance of having that density being successful,” Miller said.

Miller said nearby neighborhoods have remained as low-density, low-rise developments.

Dickmen stressed that the NCBC was not calling for Shirlington to be replicated somewhere in Albemarle.

“Arlington is not Albemarle, and Albemarle is not Arlington,” Dickmen said. “We are not suggesting this one successful design example is what we should embrace in our community. What we’re about today is looking at the challenges involved.”

Members of the Albemarle County Board of Supervisors were unable to attend as they were interviewing candidates for the vacant county executive position.