Businesses buffeted by the pandemic 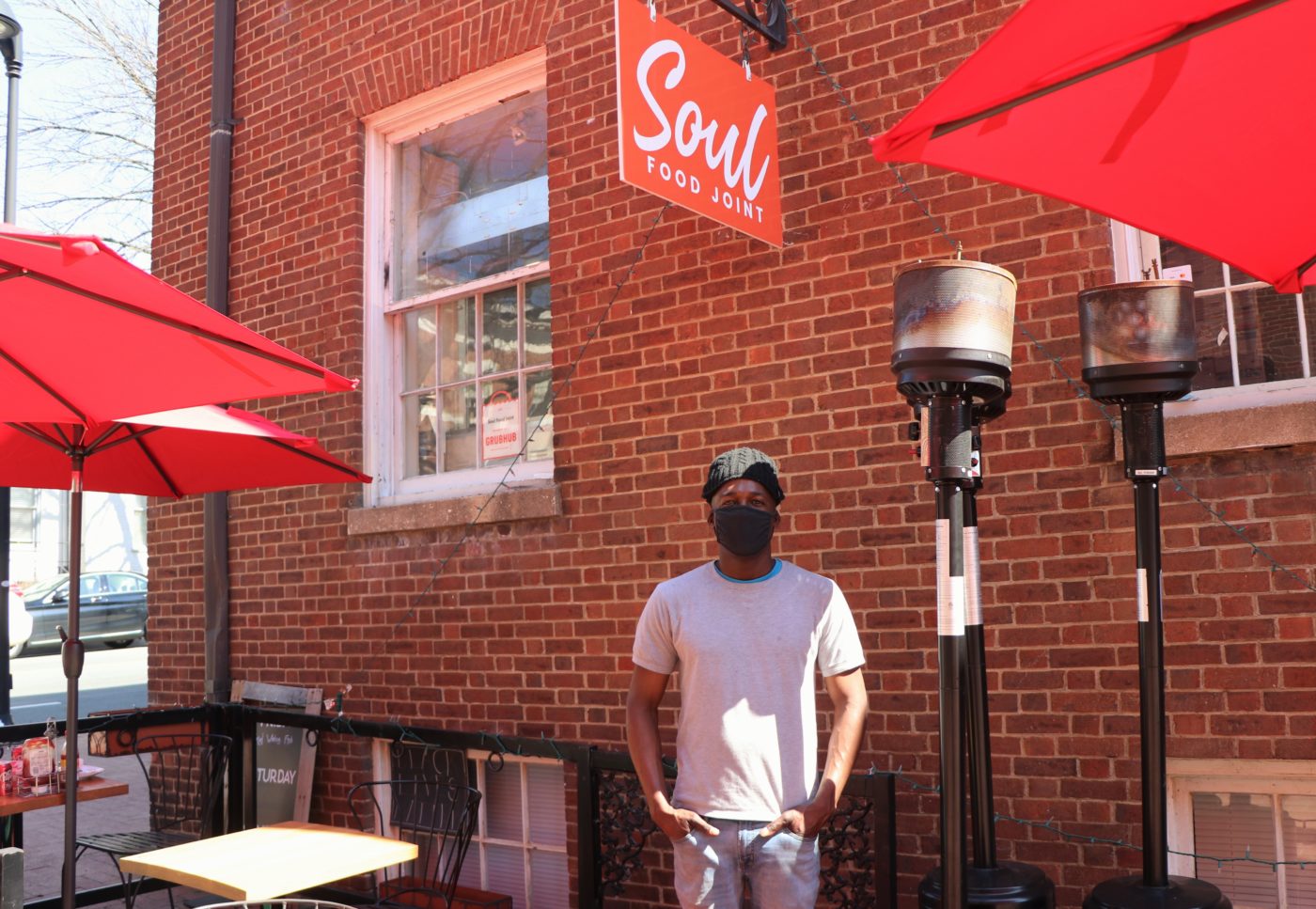 Shaun Jenkins stands outside of his restaurant, Soul Food Joint, nearly a year after it opened during the COVID-19 pandemic.

Shaun Jenkins planned to open his restaurant and catering eatery, Soul Food Joint, just off the Downtown Mall in the spring of 2020. He didn’t plan to open amidst a pandemic that negatively impacted much of his industry.

Once operating as a walk-up window and sharing space with The Salad Maker at 300 E. Market St., Jenkins bought out the space in February 2020. Weeks later, however, the world drastically changed. Despite the negative impacts on the hospitality industry from COVID-19, Jenkins considers himself lucky to have been learning as he went instead and took his time opening up properly.

After shutting down the establishment for minor renovations early last year, Soul Food Joint was poised to emerge with more space for its regulars. Tables are spaced apart and an outdoor patio offers shaded space for customers to dine as well. Like many restaurants during the past year, curbside pickup and delivery options have been a lifeline.

“Now we can run our catering and have a full-service restaurant,” Jenkins explained, noting that having the restaurant has brought in more steady money when catering jobs are in a lull.

While Jenkins is glad to be successfully open during this time, he said it’s not been without challenges.

“Clientele was still rolling through, but payroll was a challenge because not enough was,” Jenkins explained. “I ended up spending a lot of hours here myself.”

He has since applied for the Paycheck Protection Program and was one of more than 70 local businesses to receive a grant from the city of Charlottesville in April 2020. Titled Building Resiliency Among Charlottesville Entrepreneurs, the round of grants offered up to $2,000 for businesses adapting to COVID and helping with fixed costs.

As the past year has seen the majority of Americans sheltering in place, various businesses struggled to stay in operation and pay their employees. The past year also showed innovation on behalf of business owners and aid from the government to help their constituents.

As the U.S. federal government worked to roll out stimulus packages and financial aid for businesses and individuals, local governments provided assistance as well.

Over the summer, Charlottesville dispersed payroll reimbursements to help companies hire, rehire or retain employees. The GO Hire COVID grants offered up to $5,000 for businesses, and about 30 businesses received that grant. More recently, Charlottesville awarded small business grants of up to $2,500 to minority owned businesses  in January. Sixteen businesses were awarded.

Still, some establishments were unable to remain in business during the pandemic. Including a handful of food establishments, roughly 30 businesses closed within the last year according to the city’s business development manager, Jason Ness.

Meanwhile, in Albemarle County, more than 100 businesses have received various county administered grants over the course of the past year. Funding ranged from $2,000 to $50,000 and spanned multiple industries.

According to county spokesperson Emily Kilroy, eight businesses closed during the past year — all national chains that had retail or service space in the county’s urban rings. New business also entered the scene in the past year to include a new Starbucks, O’Reilly Auto Parts, along with a forthcoming Chick-fil-A as well as Aldi and Lidl grocery stores.

Kilroy explained that earlier in the pandemic, county staff wondered how negative the impact could be — reflecting on the impact to housing and development that the 2008 recession had nationwide.

“We didn’t know what the pandemic was going to do to the building industry, but on our minds was the 2008 recession which decimated that industry,” Kilroy said. “It was a discussion of ‘what do we need to do to support that function of county government.”

As the earliest days of the pandemic saw layoffs and large unemployment filings, the county saw the need to stimulate the economy and keep people working as much and safely as possible.

“We recognized how important it was to the local economy to keep going — that we keep accepting permits and plans,” said Amelia McCulley, deputy director of community development.

The county’s community development office implemented various safety measures and ways of operating in order to continue processing various applications for site plans and permits. Initially, McCulley said, the office literally quarantined the paperwork it received for a handful of days before processing items — per early guidance from the Centers for Disease Control and Prevention. Now, digital submissions are still most encouraged.

The inspections division also began reporting directly to sites rather than reporting to the County Office Building to begin each workday. It limited interactions and exposure risks, while reducing miles traveled —” a win for the environment” Kilroy explained.

Over the course of the past year, the county has seen more than 3,000 permits entered and under review with more than $370,000 in work value of permits.

“We really had to think outside the box and say we can’t do business the way we’ve always done business in this pandemic,” said Michael Dellinger, a manager in the building inspections division. “We are really proud of the work that’s been done and volume of inspections and work done.”

Meanwhile, as so many aspects of everyday life remain uncertain — even with vaccine rollout happening nationwide — Jenkins is focusing on next steps for Soul Food Joint. Having been open from 11 a.m. to 7 p.m. for lunch and dinner, he said he plans to expand hours to include breakfast and late-night options soon.