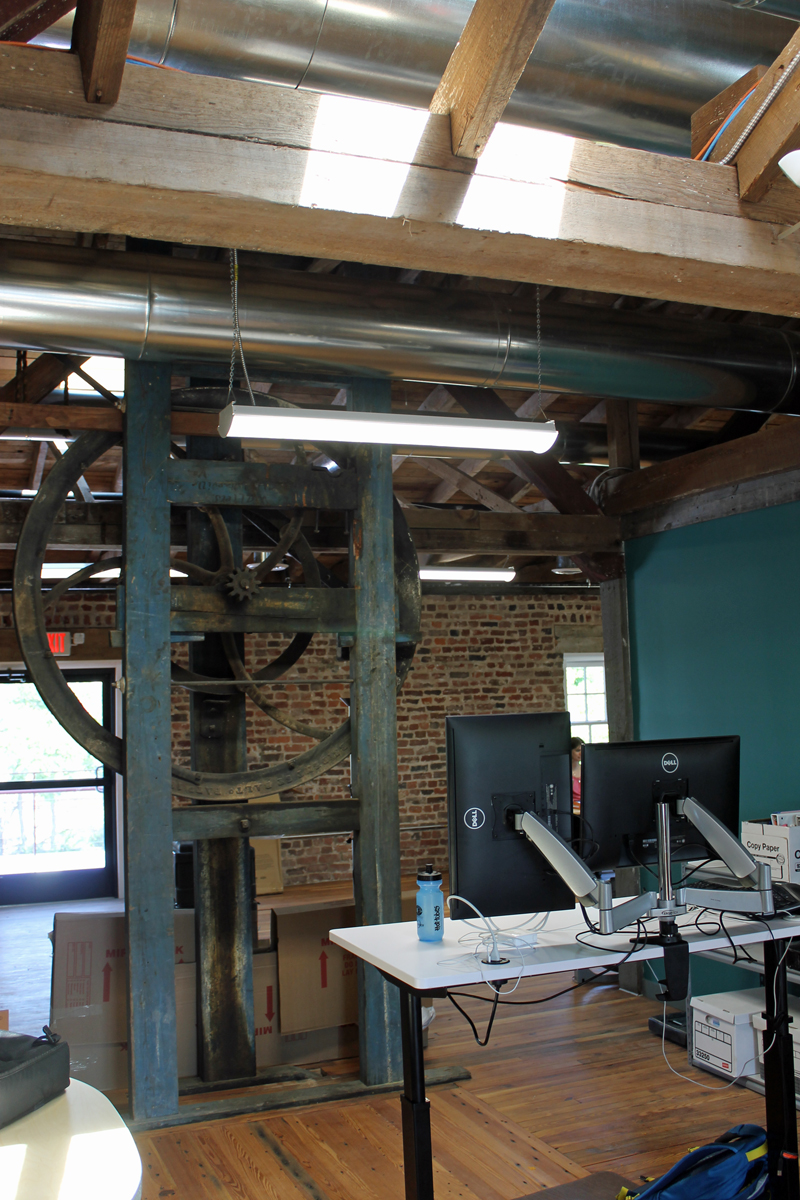 In the middle of the glass-walled, open-floor-plan offices of data firm OpenSource Connections sits an antique reminder of the space’s industrial past.

The 5-foot-wide cast iron gear has not operated the freight elevator it was designed for since the middle part of the 20th century, but the device, patented in Baltimore in the late 1800s, is busy connecting the past to the company’s modern work.

OpenSource Connections is one of four businesses that recently moved into the newly refurbished King Lumber Company building on Preston Avenue. The 1909 building, an imposing red brick reminder of Charlottesville’s industrial past, has been redeveloped over the last 18 months by Mark Green and Tom Hickman.

OpenSource Connections signed on last summer to move into the space, which the company specified to fit its needs.

“We looked at this space and said, ‘This is beautiful. Let’s let the building be the building that it is, which is an old lumber mill. Let’s not try to hide that,’” said company founder Eric Pugh. “So, we went really heavy with the glass. We wanted it to feel as big as it could be.”

The King Lumber building is one of four on a 1.7-acre site Green and Hickman spent about $5 million transforming from a collection of largely abandoned sheds and storage buildings into a hub for small businesses.

Next to the brick warehouse, Random Row Brewing is finishing its brewery and brewpub in the steel building that once housed longtime site resident Moxie hair salon. The salon last year became the sole resident of a separate, one-story warehouse at the back of the property.

Though the King building now houses four businesses, Green is still working through a long punch list of finishing touches. The back staircase is awaiting a hand rail, there is some drywall work yet to complete and the elevator needs the final OK from an inspector before it can be turned on, Green said.

Green said he expects the finishing touches will be done by the middle of the summer. He and Hickman were careful to preserve and reuse as much of the site’s industrial and historic character as possible.

The primary entrance to the main warehouse includes an archway from the original building that allowed horse-drawn carriages to enter for loading and unloading. The inside of the arch carries the inscription “H. Brand,” the stonemason who built it.

Brand, Green said, was a later generation of a family of masons, some of whom worked on the original Rotunda at the University of Virginia.

For Sam Spillman, who moved his chiropractic practice to the first floor of the building in April, the site’s history was a major selling point.

“It was exactly what I think is cool … exposed brick, the building is over 100 years old and just sort of used as a warehouse, so it was good for the building to get refurbished,” Spillman said. “They built things to last then. You don’t get that so much anymore.”

For Bradley Kipp, director of business development and finance for Random Row Brewing, the site gives the brewery a home where it can start relatively small and grow.

“We have the ability to grow as much as we need to grow,” he said. “We want to be a place for people to come have a beer and learn about craft beer and our practices.”

Random Row plans to brew between 300 and 500 barrels in its first year, and will sell exclusively by the glass through the tasting room. Distribution to stores and restaurants will come sometime later, Kipp said.

Lynn Hammonds, owner of the local branch of Express Employment Professionals, was attracted to the space because it fit her personal taste.

“Now we can feel proud that we have a great space that is really workable for us that is not stuffy, but it is not a warehouse. It is this really cool structure,” she said. “We just have a really cool work space.”