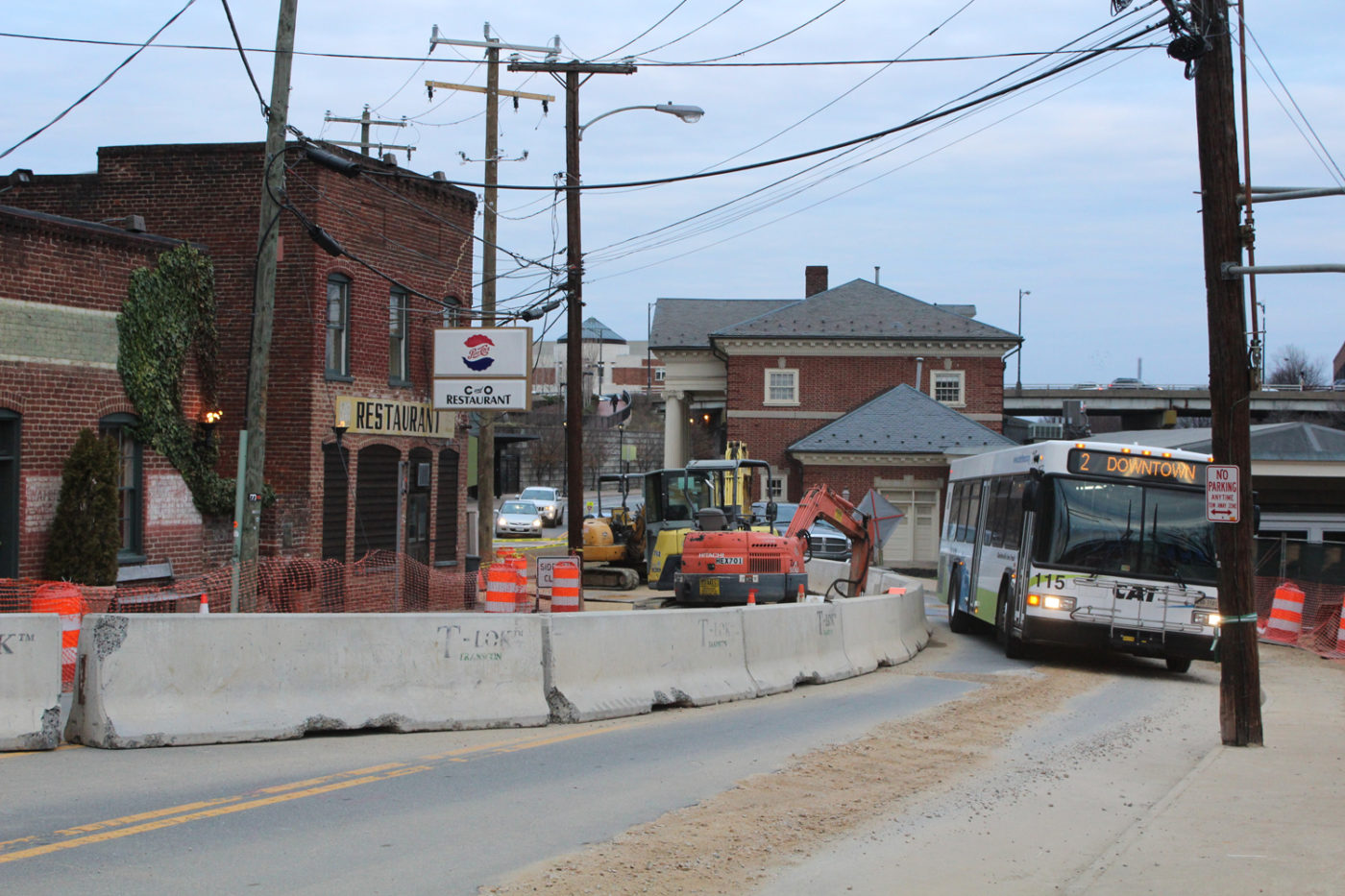 Groundwork for a future six-story apartment building on Water Street has raised the alarm of some downtown business owners who want city officials to take their interests into account before allowing street closures to accommodate for construction.

“Right now, you have one lane closed and pretty much they are just continuously moving concrete barricades around to do different parts of the project,” said Derek Bond, general managing operator of the Melting Pot restaurant in the Holsinger Building.

The closure of Water Street stretches for several blocks, from the C&O Restaurant to Second Street Southwest, and allows vehicles to only move west. The city approved a permit allowing traffic to be restricted so crews could do utility work for the new building at 550 E. Water St., which was approved by the Board of Architectural Review last April.

The planned 70-foot-tall building is on a 0.28-acre parcel that had been a parking lot for many years. Residents of the Holsinger appealed the BAR’s decision to the City Council in July, but councilors voted 4-1 to uphold the review panel’s decision. A further appeal is pending in Charlottesville Circuit Court.

Meanwhile, Bond said he is concerned his business will be affected by the continued closure.

“The first time they closed the road was in the third week of December and then they opened it back up for a week and now it’s been shut down since the beginning of January,” Bond said.

The chairwoman of the Downtown Business Association of Charlottesville said she did not have any advance warning of the temporary closure.

“What I’m requesting of the city is that in the future, any street closure first has input from the people that are affected,” said Joan Fenton. “Before [they] issue the permit, we should figure out what the concerns are and what needs to happen.”

Fenton said getting businesses involved in logistics can help speed up the time it takes to complete projects. She said the reconstruction of the Downtown Mall with new bricks in 2009 originally was expected to take years.

“The businesses all came together to work with the city, and the DBAC led the charge on that,” Fenton said. “We got it to take one season and we ensured that every business was open and never blocked.”

However, she said problems happen when businesses aren’t consulted first.

“When the Violet Crown came in, that conversation didn’t happen and everybody was suddenly told that [Second Street] would close,” Fenton said. “There were several people with businesses on that street that were severely affected.”

After the fact, Fenton and others worked with the city to get the roadway opened up on weekends. She said that same coordination did not take place before the city approved a construction permit for utility work at 550 E. Water.

Fenton said she believes another complication was turnover in the city’s traffic engineering department, including the resignation last year of former engineer Rashad Hanbali.

The city has since promoted Brennan Duncan to be the city’s traffic engineer, and he’s been in contact with Fenton and others to provide construction updates.

The street closure permit had been set to expire Friday but the work had not been completed. The sidewalk on the south side of Water Street was covered in dirt and debris and Charlottesville Area Transit buses frequently cross into the area still left open to pedestrians.

“Weather and unmarked utilities have pushed the timeline back a few days,” Duncan said in an email Friday to Bond and others.

The contractor needs to install two concrete duct banks to carry utilities underground and Duncan said that work will be completed by the end of this week.

“At that point, the concrete barriers will be removed and the roadway will be reopened to two-way traffic,” Duncan said.

Bond said he remains frustrated by the continued delay.

“In private business, if I have a deadline to meet, I have to meet it,” Bond said. “There’s no option. It seems like with the city they’re pretty flexible with the deadline. It’s not really a deadline.”

City engineer Marty Silman said in an email to Bond and others last week that part of the delay stems from a broken terracotta sump pump used by an adjacent building.

“Delays can occur due to unknown encounters during excavation efforts,” Silman said. He added that Dominion Virginia Power also sought changes during the process, extending the delay.

Last summer, another section of Water Street was affected due to work to place utility lines underground around the future West2nd building on the site of the former City Market.

“If they had to close a lane, they had to pay to have somebody be out there to direct traffic so it was held up in one direction,” Fenton said.

However, she said the permit for 550 E. Water St. was granted without the same attention and that she hopes a plan will be in place when construction begins on the nine-story West2nd building later this year.

Utility relocation for West2nd is expected to be completed in April followed by groundbreaking in May, according to architect Gregory Powe. He said they will work to keep their future neighbors up to date.

“We shall hold pre-construction planning meetings with city staff to plan off-site impacts such as traffic management and site access,” Powe said. “We are planning to hold a neighborhood briefing in advance of construction commencement.”

Powe said there also will be a website that will feature construction updates.

Water Street also will eventually be affected by construction of the Belmont Bridge replacement. The firm Kimley-Horn has been hired by the city for nearly $2 million to create an urban design plan for the area. The first public meeting for that effort will be held at 5:30 p.m. Feb. 21 at CitySpace.