http://s3.amazonaws.com/cville/cm/mutlimedia/20120926-MPO-Long-Range-Plan-Candidates.pdf A new view of the Western BypassCity resident seeks alignment for Eastern Connector near Pen ParkMPO may defer bypass vote if local projects are not funded

The executive director of the Thomas Jefferson Planning District Commission shared new details Wednesday about proposed concepts that will be considered by the Metropolitan Planning Organization during their revision of the region’s long-range transportation plan.

One of those concepts is an 8.3-mile two-lane road that would extend northward from the proposed Western Bypass.
“It will look similar to some of our newer secondary roads here in Albemarle County,” said Stephen Williams said. “It would have 12-foot lanes and it would have some shoulder that could also be used as a bike lane.”
The Western Bypass extension would use existing portions of Earlysville Road and Dickerson Road, as well as a new section of road that would extend north from the bypass’ northern terminus. The speed limit would be 50 miles per hour.
There would be at-grade intersections at Dickerson Road, Town Center Drive, Airport Road and Quail Run. Two existing bridges on Dickerson Road would be replaced and a new bridge would be built across the Rivanna River.
The preliminary cost estimate is $132 million, including the cost of 20 years of maintenance.
“We’ve not done anything in the way of design, and there have been no engineering efforts,” said Williams. “All we’re using is standard unit costs that have been developed by the Virginia Department of Transportation.”
The bypass extension was just one of six concepts presented to the MPO. Another was a $45 million plan to alter the current state of U.S. 29 for 3.2 miles between Hydraulic Road to the South Fork of the Rivanna River.
“[This would] convert from the sort of rural highway design that exists out there right now to more of an urban boulevard type of concept,” Williams said.
A ten-foot wide multi-use path would be built on both sides of the road, two lanes would be dedicated to buses, and travel lanes would be narrower.
“It would be safer for bicyclists,” said Charlottesville Mayor Satyendra Huja. 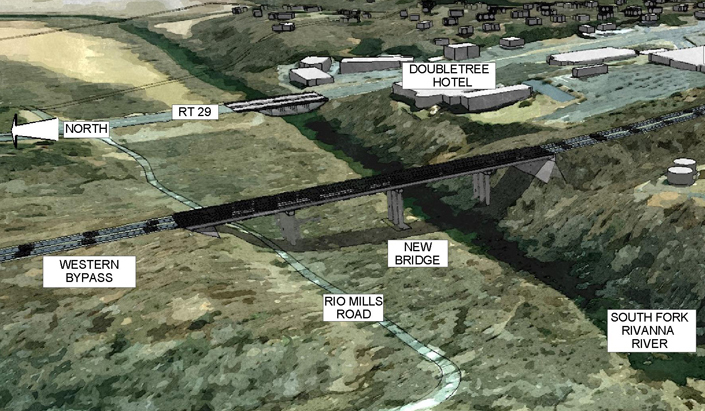 Another project would be the extension of Berkmar Drive north across the South Fork Rivanna River. The concept currently has a cost-estimate of $56 million, including a $13 million bridge at the same location where one is needed for the Western Bypass.
“Clearly, there would have to be a method to get the Berkmar Drive extension to cross, we think under the bypass,” Williams said. “There is a fair grade difference between the two roadways at that location.”
The Skanska-Branch team hired to design and build the 6.2-mile four-lane Western Bypass is required to show three concepts for how that project will accommodate Berkmar Drive Extended.
“This pure roadway is not purely necessary to move traffic volume,” Williams said. “It’s more of a project to provide a necessary connection for development and to improve access to areas that are likely to be developed in the Hollymead area.”
Another proposed project that would widen the U.S. 29-250 bypass from Old Ivy Road to Fontaine Avenue could cost about $86 million but Williams said it could be much more than that because of the need to improve various interchanges to accommodate the additional lanes.
Williams also said the Eastern Connector would be a complicated project because it would involve widening a portion of Route 20 to four lanes, a new bridge across the Rivanna River and a new roadway that would travel either through or near Pen Park before connecting to Rio Road.
“You have that line going right through the middle of Pen Park which is probably the least likely [place] for it to be,” said City Councilor Kristin Szakos. “I think there is support for putting in various other routes.”
Williams said if the Eastern Connector were built either with two lanes or four lanes, there would still be a need for a grade-separated interchange where Rio Road meets U.S. 29.
“The volume at Rio Road and 29 would go up so much from either of these Eastern Connector improvements that we don’t think it’s possible without making that into an interchange,” Williams said.
John Pfaltz, a city representative on the CHART committee, said the projects should not be looked at in isolation.
“There are some things that go together and you might want to think about it when you look at them,” Pfaltz said. “The widening of U.S. 250 east on Pantops really does not make too much sense unless you have an Eastern Connector because where is that traffic going to go?”
Jeff Werner with the Piedmont Environmental Council said he did not believe that any of these concepts would be funded because of the $244 million that will have been spent on the bypass.
“You’re going to get the money for this road and then you’re going to get nothing else,” Werner said.
The four MPO voting members present did not seem to express a preference for or against any of the concepts. Albemarle County Supervisor Rodney Thomas was absent.
In November, Williams will present the MPO with suggested transit projects and how they may reduce traffic congestion. In January, the MPO will be asked to decide what combination of projects should be further reviewed and refined.
“We’ll be relooking at the cost estimates to see if there is any overlap where there might be cost savings as well as modeling them to see what the traffic impact and the transit ridership impacts are,” Williams said.
The long-range plan will be adopted by the MPO in the spring of 2014.