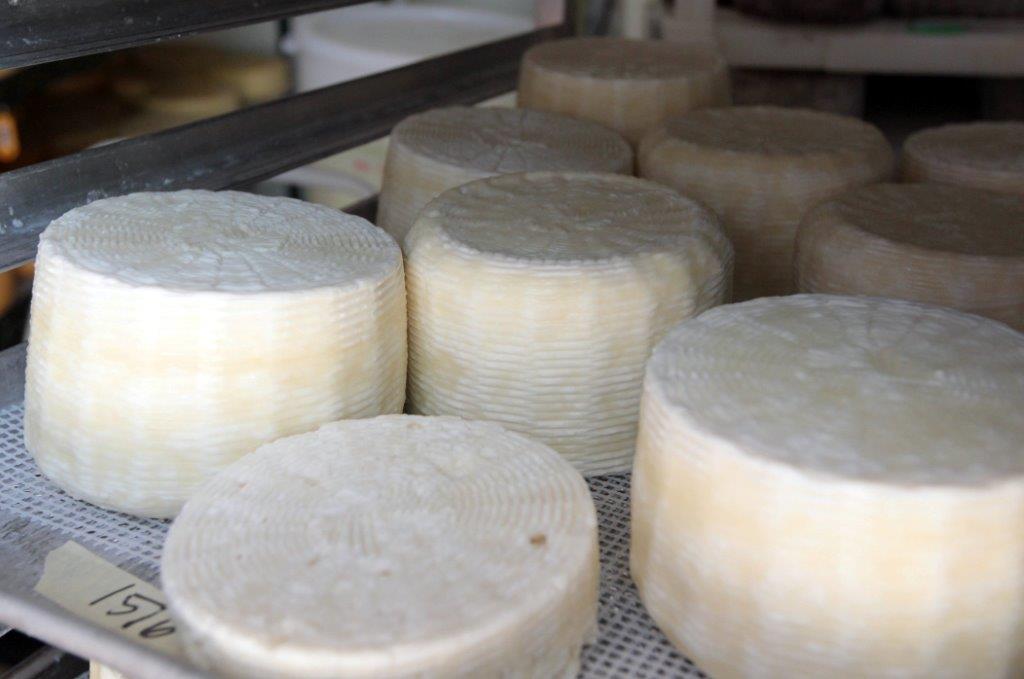 When future historians write about Albemarle County’s local food movement, chef Gail Hobbs-Page hopes there will be a chapter that celebrates the area’s cheese.

“If you know anything about cheese, you know it’s place-based,” Hobbs-Page said. “Just like everything in wine is about place.”

For the past eight years, Hobbs-Page has been crafting cheese at the farm that surrounds her and her husband’s Esmont home. The goal is to make a living by creating a local product that is also an artistic expression of place.

Hobbs-Page’s vision to become a cheesemaker came at a time when she was looking to transition out of the kitchen after a 27-year career that included stints at the Mark Addy Inn in Nellysford and Hamilton’s on Charlottesville’s Downtown Mall.

“I rather naïvely thought that if you know about cheese you could certainly make it, and that was the beginning of Caromont Farm,” Hobbs-Page said.

Nadjeeb Chouaf is a cheesemonger who opened Flora Artisanal Cheese inside the Milli Joe Coffee shop at the corner of Preston Avenue and McIntire Road. He worked with Hobbs-Page on a different farm in the days when Caromont was just a dream.

“What I love about Caromont is the devotion to the animals,” Chouaf said. “Gail makes sure they’re pastured on the best land and you can see the love that they have for the animals, which is where quality starts.”

Caromont’s first product was fresh chèvre, which is what both Hobbs-Page and Chouaf say many people think about when they think of goat’s cheese.

Since then, Hobbs-Page has been recognized by the American Cheese Society, with her “Esmontonian” taking second place at last year’s conference.

But such accolades have only come after Hobbs-Page spent time studying how cheesemakers elsewhere have managed to create artisanal cheeses that represent the essence of a geographical place.

“They weren’t just making cheddar in Vermont; they were making the ‘Cellars at Jasper Hill cheddar’ with this person’s milk, and this person’s milk tasted like this because the cows were grazing on a certain type of grass,” Hobbs-Page said. “Stylistically, these kinds of cheeses have started being successful in the United States. We can do that here.”

To make it work in Albemarle, Hobbs-Page needed access to fresh ingredients. She began to raise her own goats.

Hobbs-Page added cow’s milk cheeses to expand her offerings but she had to find a local source that she trusted. She now uses milk from Silky Cow Farm in North Garden, started in 2012 by Amy and Nathan Vergin.

“He was my first intern,” Hobbs-Page said. “I contacted my old friend Joel Salatin and he sent me to Nathan. This guy lives for dairy.”

Hobbs-Page frequently consults with cheesemakers from around the world in an effort to make her product better. And it’s also about creating an Albemarle tradition.

“We’ve been around long enough to give birth to two more cheesemakers who are taking what they learned here,” Hobbs-Page said, referring to two former employees who are now working elsewhere. “That makes me very proud.”

Other area creameries include Twenty Paces at Bellair Farm, which makes a ricotta from sheep’s milk, and Our Lady of the Angels Monastery near Crozet, which makes gouda.

Chouaf said he thinks there is an appetite for artisanal cheese in the community.

“The fact that I’ve been able to open up a cheese shop is because people love the product,” he said. “People always ask first if we have Caromont. She’s so visible and her products are so great.”

Hobbs-Page said she produced about 300 pounds of cheese in her first year. That increased to about 90,000 pounds in 2013.

In keeping with her experience as a chef, Hobbs-Page is innovating to create new flavors. She is collaborating with Barboursville Vineyards this year on what she’s calling “Esmontian Tinto.” Barboursville’s Merlot is used to wash the cheese, imparting the rind with a reddish hue.

Hobbs-Page also has collaborated with one cidery on a very local product.

However, local products also come with a higher price tag. For example, four ounces of chèvre costs $5.69 at one local market.

“It goes back to milk quality,” Chouaf said. “There’s a vast amount of skill that has to be compensated for and there’s the cost of raising the animals.”

Entering her ripening room on a recent tour, Hobbs-Page’s voice rises excitedly as she explains the different methods for hardening the rinds of her delicacies. Each of the cheeses has a separate microbiology, resulting in different flavors.

“It’s such alchemy to me that we get two different kinds of cheeses out of the same kind of milk,” Hobbs-Page said.

The entire cheesemaking operation takes place within about a 1,000-square-foot radius.

Goats get milked outside the creamery 12 at a time and the milk is piped into an adjacent room and stored in a 225-gallon tank at 38 degrees until it is ready to be made into cheese.

Their milk is transformed into cheese in what Hobbs-Page calls the “make room.” Visitors must take off their shoes and put on plastic boots to enter.

“You can’t bring anything in from the outside world,” Hobbs-Page said. “Whatever’s on the bottom of your feet has to stay out there.”

After the cheese is made, it is drained and then dried in a small room, and another step in the process begins.

The cheesemaking is not the end of the local food chain. Whey, a byproduct of the milk, is pumped out and goes back to Silky Cow Farms for the pigs raised there.

“It’s the perfect food for a prosciutto-bound ham,” Hobbs-Page said.

For Hobbs-Page, her operation is all about boosting local culture.

She’s working with Yancey Elementary to teach students about place. Recently, she held her first event with Club Yancey and reported that one child from Esmont was ecstatic to sample a cheese named after Red Row Lane, the street on which he lives.

“I’d like to see the southern part of our county be just as recognized for the jewel that it is,” she said.