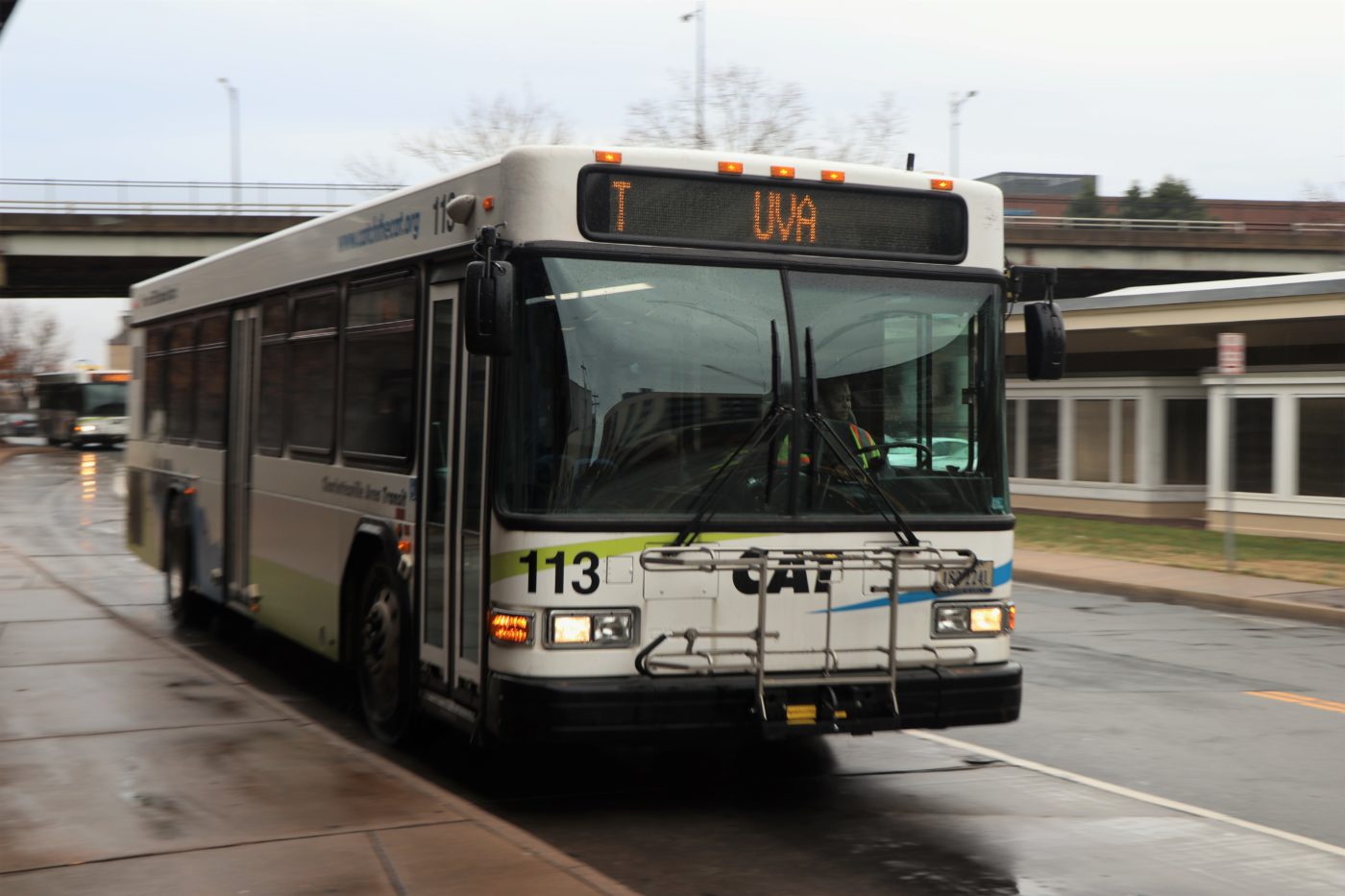 While some residents choose to take public transportation, some Charlottesville and Albemarle residents rely on it for their livelihood.

When former Charlottesville Tomorrow reporter Sean Tubbs purchased his Fifeville home in 2008, part of its appeal was its proximity to a Charlottesville Area Transit bus stop. For five years, he took the bus to get to and from work every day. Eventually, the route was adjusted and no longer served him as well, so he began driving to work in downtown Charlottesville. However, taking a new job with the Piedmont Environmental Council renewed his passion for public transportation — and now he prominently advocates for it.

He said that when he made the switch to PEC, its president, Chris Miller, challenged him to change his ways. As of March, he began taking CAT regularly — often documenting it on social media in great nuance and detail.

“I believe each of us has to do our part to reduce our greenhouse gas emissions,” Tubbs said. “It took about a month or so to get my commute down to less than 20 minutes or so.”

Through trial and error, Tubbs began streamlining his routine route. He said it’s also important to note that his trek still includes about a third of a mile of walking.

“For me, getting out of my car does involve more walking, which is why it’s important to have a functioning sidewalk network in the urban area,” he said.

The Economic Impacts of Transit study estimated savings of nearly $13 million due to reduced emissions and $3.5 million from reduced demand for fuel, leading to lower prices. With fewer individual cars on roadways, the report indicated $250,000 in savings from wear and tear to roadways. It also stated that every dollar of public investment in transit can generate $2.91 in economic activity statewide as a return on investment.

CAT is a part of the Regional Transportation Partnership, and Williams noted the collaborative conversations the city, Albemarle County and the surrounding counties held to decide what regional transportation is most effective and efficient.

“My goals for CAT are first to have some real conversations with City Council about the goals and ultimate strategies of where CAT needs to be in about three to five years,” Williams said. “Route expansions are potential, but that needs to be clearly articulated by the jurisdictions that want it and are willing to pay for it.”

An increased ridership of public transportation — even if diesel-powered — can mean fewer individual cars on the road, and in turn, fewer greenhouse gas emissions. However, as part of climate resiliency, locals are looking to the feasibility of incorporating electric vehicles and electric-powered public transportation.

“A lot of the conversation has been around electric vehicles but there are many other alternatives that are out there,” Williams said. “I come from a system — the Greater Richmond Transit Co. — who went from diesel to compressed natural gas. That is probably a third of the particulars associated with diesel.”

He said that while it may not be quite the big leap to electric buses, it can be a positive step.

“I think that’s probably moving closer — we don’t necessarily have to go from diesel all the way to electric in one fell swoop — I think transitioning to CNG is probably realistic considering the city owns a gas utility. It makes it easier for us to potentially control our costs. Then, as technology continues to improve and get better, then we move five or 10 years down the road to electric vehicles.”

Williams said that conversations with city and county officials have revolved around processing their transportation goals and “making them aware of CAT’s limited range at this point in time.”

The idea of expanding service within both localities has been considered, but Williams notes the time frame for implementation, to include build-out of new buses.

“I can’t necessarily just expand service tomorrow, it’s a two year window to get that done,” Williams explained.  “We need to make sure that everybody’s on board, there’s funding available and that it will be funded two years from now to make that happen.”

Former Councilor Kathy Galvin, who served on the Regional Transit Partnership, noted the intersection of urban planning and land use with enhanced public transportation.

“To be transit-ready, you need to set up your settlement pattern to be walkable. You’ve got to be able to walk to that bus stop. That means you need sidewalks. That means you need street lights. You need shelter,” she said. “All these things cost money and demand that you have enough people there to warrant this investment, but we’re sprawling all over the place.”

She cited small area plans as a factor in creating destinations for public transportation.

“It takes a lot more intentionality to create a land use pattern that you need to sustain a high-frequency bus system. It’s a hard concept for people to understand, but it’s one of the benefits of density,” Galvin said. “And it’s not density alone, it’s got to be walkable. You’ve got to have that infrastructure in place.”

Williams said he wants to make sure that all stakeholders are on the same page going forward.

“CAT wants to be a very good steward of the public dollar,” Williams said. “We need to make sure that all parties are on board with what we need to do.”

While public transportation is often seen as something that can have an environmental and economic impact, frequent rider Tubbs highlighted the fact that it can also have an impact on equity of residents.

Of the current routes, Tubbs noted public transportation’s impact on community members who depend on it, rather than those who choose to use it. With rising housing costs within Charlottesville and the county’s urban ring, more and more individuals and families are living farther out and need to commute in for work.

“I do think the routes could use some adjustments, but we cannot lose sight that some of the most economically vulnerable people in our community depend on transit,” Tubbs said.  “Any changes must serve them first.”

With connectivity in mind, Charlottesville Planning Commission member Rory Stolzenberg said the intersection of public transportation with land use lies in climate resiliency.

“Our overall city climate footprint is a function of our individual choices, and the carbon we each emit,” Stolzenberg said.

The EIT report also indicated that more than 9,000 “jobs would be foregone if employees did not have transit to travel to and from work.”

As the EIT study has been underway, a final report and executive summary is expected by early February.

Meanwhile, Albemarle County Public Schools has applied for a Dominion Energy program to possibly attain an electric school bus for its fleet. The program starts this year with 50 buses that will be awarded around the state. Dominion plans to add to that number each year so more school fleets can begin switching from diesel to electric.

“We applied for one of the electric school buses, and we hope to find out soon whether we were awarded one,” said Jim Foley, Director of Transportation for ACPS, who also serves on a county committee aiding in the development of Albemarle’s climate action plan. “I drove one, and they’re very powerful. The issue with electric school buses is their cost.”

Foley said electric buses cost about $350,000, compared with about $100,000 for a standard diesel school bus.  As Dominion is subsidizing part of the purchase, if awarded for their application, ACPS would only front the $100,000 for the electric bus it could receive.

“It makes sense for Dominion, especially with school buses, because their peak energy demand is in the summer months from 2:30 to 6:30 in the afternoon Monday to Friday. So typically, us, and other school districts, only use about a third of our fleet for summer school.”

He said during those times, the bus could serve as a battery that would feed back into the electric grid.

He added that instead of sending power to the grid, it could also be sent into the school building, essentially lowering that building’s electric demand.

“What it does for Dominion is reduces the overall electricity it has to produce and could ultimately result in fewer plants being built,” Foley said.

As the University of Virginia straddles both the city and the county, it has a role to play, as well. In December 2019, the City Council passed a memorandum of understanding that added UVa to the Regional Transit Partnership that includes CAT, JAUNT and the Thomas Jefferson Planning District Commission.

“UVa was a member already of this, it’s just a matter of being a voting member,” said Rebecca White, director of the university’s department of parking and transportation.

In late 2019, the university also released a 10-year plan that includes strengthening its carpool incentives and relationships with regional transit.

The partnership also presented a plan for collaborating with the Central Shenandoah Planning District Commission. TJPDC has been working with CSPDC to establish a bus that would run through Staunton and Augusta County and to the Charlottesville area. CSPDC plans to apply for funding on Feb, 3, which requires a local match that totals up to $210,000 over two fiscal years. Their region would pay half with Charlottesville, Albemarle and UVa paying the other.  UVa has committed about $65,000, and Charlottesville and the county will split the remainder.

As the new councilors and supervisors settle in, Galvin and Albemarle Supervisor Diantha McKeel will communicate around the matter.

As for regional public transit transformations, Tubbs said he is enthusiastic about the ongoing conversations surrounding the topic. The Center for Civic Innovations is planning a forum on Jan. 22, and PEC is a sponsor.

“The goal here is to better understand the barriers people have to getting out of their car. No judgment, but simply an attempt to begin a conversation about this,” Tubbs said.  “I’m looking to get the stories of people to better understand how the overall system can work together.”