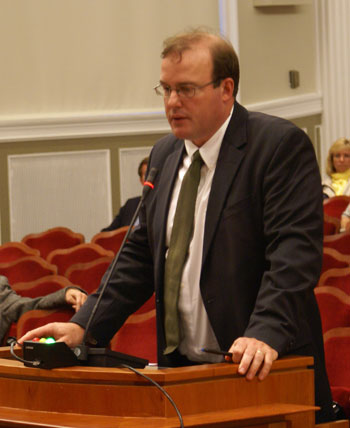 The head of a pro-business group representing area real estate developers has told the Albemarle Board of Supervisors that one of its tools for funding new infrastructure is flawed.

“Cash proffers are not helping you achieve your Comprehensive Plan,” said Neil Williamson, president of the Free Enterprise Forum.

In October 2007, supervisors significantly raised the fee developers must pay for residential units that can be built as a result of a rezoning. The investment is intended to mitigate the costs of new community infrastructure such as roads, schools and libraries.

Williamson appeared before supervisors last week to talk about what he claimed are “contradictory consequences” of the policy.

Louisa requires $4,362 per unit and Greene County’s cash proffer expectation is $5,778 per unit. Charlottesville does not collect cash proffers.

The Comprehensive Plan calls for high residential density in the county’s growth areas to discourage development in the rural area. However, Williamson said many developers skip the rezoning process because of the fees.

Williamson pointed to the planned 204-unit Lochlyn Hill development on Rio Road that straddles the Albemarle-Charlottesville border. Milestone Development chose to rezone the portion in the city, but went by-right in the county.

“The city really applauded the ability of the rezoning to make the site better,” Williamson said. “They could have done it by-right but it wouldn’t have been as gentle on the land and wouldn’t have included as much open space.”

Just to the north of Lochlyn Hill is the Dunlora Forest development, where about 100 homes are under construction.

“Under a rezoning, they could have increased their density up to 200 units,” Williamson said. However, he argued that would have cost around $2.69 million in cash proffers.

Finally, Williamson argued that the county knows of the disincentive and pointed to the recent creation of a Crozet Downtown District as an example. The objective was to encourage development of residential units above commercial storefronts by allowing them by-right.

If cash proffers were required, Williamson said it would cost a developer more than $100,000 in fees to build eight apartment units above a storefront.

“If the no-cash proffer policy is acceptable in downtown Crozet, why is it not acceptable in the other growth areas?” Williamson asked.

Supervisor Dennis S. Rooker said he did not think the Crozet example was valid.

“[Downtown Crozet] was already developed as commercial,” Rooker said. “In that sense, I wouldn’t compare it to a vacant piece of land that’s waiting to be rezoned.”

Rooker said he did not think that cash proffers were determining what is currently being built in the county. He pointed out that the North Pointe development near the airport has begun construction, even though it was rezoned in 2006, before the adoption of higher cash proffers.

“Their cash proffers are miniscule at $500 each,” Rooker said. “Hollymead Town Center has built a lot of houses, and they seem to be selling and their cash proffer is $7,400 per unit.”

Michael Guthrie, chairman of the Free Enterprise Forum’s Board of Directors, disagreed.

“If you go back three years when the economy was not good, I don’t think you’d see the same thing,” Guthrie said. “We have developers that are out of business now because they made good business decisions, bought the land … and then the market went south.”

Rooker asked Williamson and Guthrie what their alternatives would be for raising money to pay for infrastructure. Neither had a response.

“There is an impact on the community that results from new people moving to the area and new structures being built,” Rooker said. “The question ultimately comes down to who should bear the cost of that impact?”

Williamson said developers pass on the amount to homebuyers by increasing the price.

Rooker said he thought that was part of the cost of doing business. He pointed out that the county’s $11.8 million acquisition of property for a new Northside library included $500,000 in proffers from the Stonefield development.

Rooker said he would prefer to charge an impact fee of $3,000 that would go toward infrastructure.

“You would have a more level stream of revenue to the county, and it would be a much lower impact on all units,” Rooker said. “There are problems with the cash proffer system and I agree with a number of your points.”

However, the county does not have authority from the General Assembly to charge such a fee.

Hanover County eliminated its cash proffer last year, but restored it at a lower rate of $2,306 per unit earlier this year. Chesterfield County is reviewing its policy of $18,896 per unit.