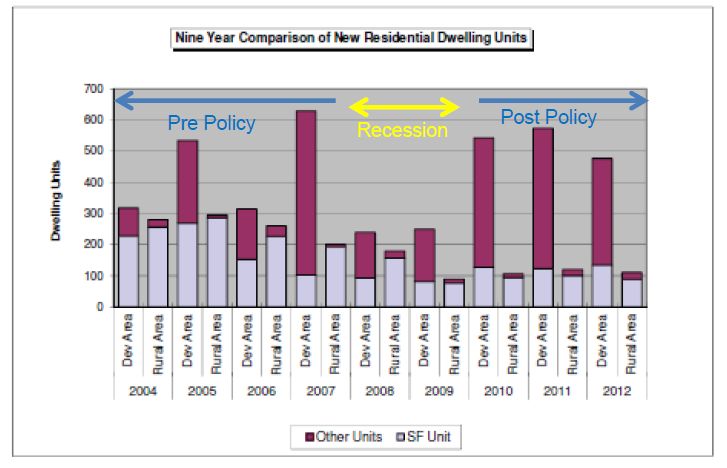 http://s3.amazonaws.com/cville/cm/mutlimedia/20131106-Cash-Proffer-Presentation.pdf Could Supreme Court ruling affect local proffer policies?Development on East Rio Road deferred in debate over proffersNew Kohl’s store still on schedule after Hollymead proffer amendment
The Albemarle County Board of Supervisors has signaled a willingness to amend a policy that requires developers to pay cash for housing units that can only be built as a result of a rezoning.
While supervisors stopped short of calling for a full overhaul of the cash proffer policy, which generates revenues for community infrastructure such as schools and roads, they agreed to recognize the fact that developers could build some homes without a rezoning.
“We all seem to agree that it makes sense to not charge cash proffers on the existing [by-right] density,” Supervisor Dennis S. Rooker said at a recent board work session.
The immediate beneficiary of the change likely will be developer William Park, who deferred a rezoning application in July due to concerns he could not afford to pay about $20,000 each for 65 units at 605 E. Rio Road. The board may consider reducing that amount by the number of homes that could be built without a rezoning.
“That will be around $120,000 in savings,” said Supervisor Ann H. Mallek.
The board adopted the county’s current cash proffer policy in 2007.
“One of the big motivators at the time when it was created was to improve the development process,” said Mark Graham, director of the county’s community development department.
He added that the idea was to give developers more certainty about what supervisors expected.
However, members of the development community have been asking supervisors to amend the policy, citing economic difficulties.
“I own 37 acres at the intersection of [Interstate] 64 and U.S Route 250 on Pantops called Gazebo Plaza that is zoned for intensive [commercial development],” said Richard Spurzem.  “When I tried to rezone this property to a much less intensive residential use, one of the stumbling blocks was the proffer policy which would have had me paying upwards of $8 million.”
Developer Frank Stoner of Milestone Partners encouraged the county to move away from a one-size fits all approach to cash proffers.
“A $20,000 cash proffer may seem reasonable for a $600,000 house, but the current policy would impose the same proffer on a $300,000 house,” Stoner said. “Faced with time and potential costs of rezonings, several developments in the urban ring have opted out of rezoning.”
For example, the 90 homes being built at Dunlora Forest on East Rio Road are being developed by-right, leading to a less dense neighborhood than the one called for in the county’s Comprehensive Plan.
But staff said they think that economic conditions, and not the proffer policy, have affected growth.
“The time the cash proffer policy was adopted was when rezoning stopped,” Graham said. “We had a huge inventory of materials, and because of the downturn, there was very little interest in rezoning.”
The owner of 605 E. Market asked supervisors to make it easier for her property to be developed by Park.
“I cannot give up on getting this rezoning before I lose my sale,” said Mary Dickens, an 83-year-old widow whose 2.8-acre property is under contract pending resolution of the application.
All six supervisors supported giving credit for by-right development that could be built.
“It seems to me like we ought to go ahead and make this one change,” Rooker said.
Supervisors will hold a work session in the near future that will consider whether the proffer amount should be reduced, or if it can be set based on sales price of each unit.
However, one supervisor warned against that approach.
“The impact is the same for education and traffic,” Mallek said. She added that many of her constituents have told her they should not have to bear the cost of infrastructure for new residents.