Homebuilders in Albemarle call for changes to cash proffer system 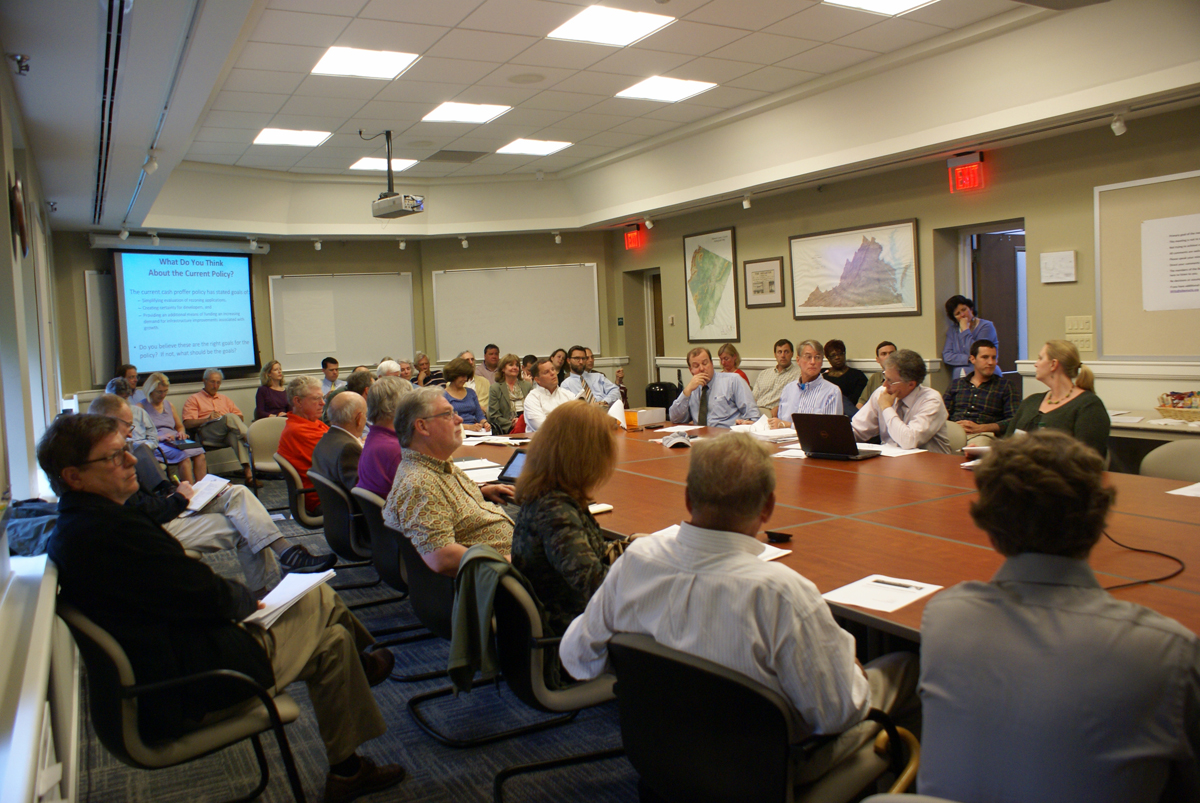 A roundtable discussion in Albemarle County on Thursday revolved around one question: Who should pay for the sidewalks, roads and schools needed for new housing developments in the county?

About a dozen local developers brainstormed with the Planning Commission to create recommendations for how Albemarle might adjust its cash proffer program.

Proffers are a voluntary contribution offered by developers at the time they seek approval of a rezoning. Proffers can take the form of cash, a pledge to fund services like transit, a promise to build affordable homes or the dedication of land and infrastructure to the county.

In 2007, Albemarle sharply increased its cash proffer expectations in the hopes new development would pay a greater share of the costs for community infrastructure. Some homebuilders at the workshop said the costs are too great, there are unintended consequences for the county’s development goals and that someone else should help foot the bill.

“I think the presumption of the policy is that the county needs an additional means of collecting dollars to pay for capital improvements, which presumes that the existing tools that you have are not adequate,” said Frank Stoner of Milestone Partners.

Stoner was among those who suggested that an increase in real estate property taxes would be a fairer way to raise funds. Last month, Albemarle County adopted a tax rate of 79.9 cents per $100 of assessed real estate value, a 3.3-cent increase over the previous rate of 76.6 cents.

“A 1 cent tax increase gives you almost double the revenue that you have received through the proffer policy,” Stoner said, “and at least it’s equitable and it’s an existing tool that you have.”

Albemarle County established a specific set of cash proffer expectations just before the economic recession began. Contributions jumped in 2007 from about $3,200 per home to $17,500 per home. During the recession, housing starts — the number of new homes under construction — fell while cash proffers edged up to more than $20,000 per home today.

Last November, the Board of Supervisors said it would review its proffer system to evaluate whether the program is promoting its goals for quality residential and commercial developments.

The cash proffer program has generated $46.1 million in pledges to the county’s infrastructure needs. However, only $7.3 million of that has been collected because many of the developments approved before the recession have yet to be completed.

Payments also have generated about $300,000 in interest income, bringing the proffer revenues to a total of $7.6 million. Albemarle’s entire capital budget, the projects proffers are intended to pay for, totals about $180 million over the next five years.

One example of contributions from a development in progress can be found in Crozet. Old Trail Village has promised to contribute $2.3 million, but has only paid $174,000 for the small portion of the development built thus far. It was approved before cash proffers were increased.

Neil Williamson, president of the business advocacy group the Free Enterprise Forum, said homebuilders are being asked to pay proffers on top of other costs such as water and sewer connections and affordable housing commitments.

Williamson said the cash proffer system should be abandoned in favor of other revenue streams.

Asked if that meant his organization would lobby for a tax hike to replace proffers, Williamson said the Free Enterprise Forum would never advocate for or against any tax rate in any locality.

“The reality is a broad-based tax is a much better way to fund infrastructure needs rather than on the backs of sporadic new housing development,” he said.

Valerie Long, an attorney who  represents various developers before local government, said the added costs of proffers have the unintended consequence of pushing development into the rural area where the county doesn’t want it.

Jeff Werner, a field officer with the Piedmont Environmental Council who has long been involved with the county’s measurement of the fiscal impacts of growth, said the Board of Supervisors needed more information to make a decision.

“We really need good hard data and not anecdotes,” Werner said. “As long as I’ve been at PEC, [people have said] ‘You are pushing everybody to the rural area.’ Well that’s not what the numbers show. There’s an awful lot development in the growth area that’s been approved.”

“You can eliminate proffers, but that doesn’t eliminate the need,” Werner said. “There is not a county in Virginia that has developed its way to a lower tax rate.”

Local developer Vito Cetta offered that because of the desirability of living in Albemarle County, the population will continue to grow and homes will need to be built, regardless of the cost of proffers.

“The development community will deliver 600 homes [a year], that’s their business,” Cetta said. “The people sitting here would prefer there be no cash proffers and no [contributions toward] affordable housing, but that’s not realistic.”

“My vote would be to simply reduce the amount, the $20,000 plus is just too much, I would probably do half of that,” Cetta said. “The development community can absorb that.”

The Albemarle Board of Supervisors will discuss the input from the roundtable on the cash proffer system at a future meeting.