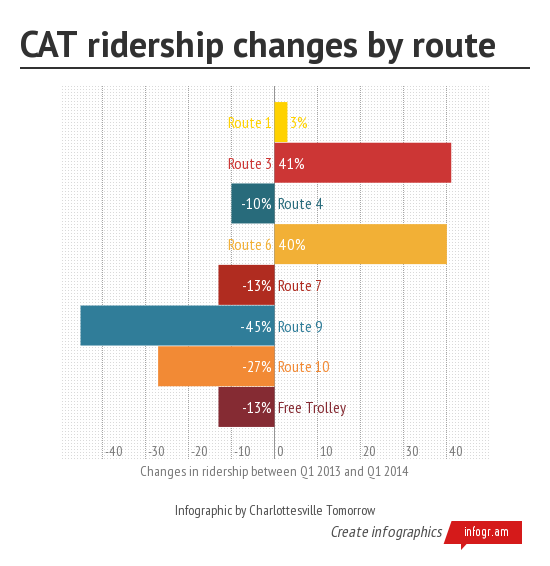 http://s3.amazonaws.com/cville/cm/mutlimedia/20140406-CAT-Report.pdf When will transit projects hit the road?Charlottesville bus routes to change in JanuaryCouncil OKs new bus route into Albemarle

Ridership on Charlottesville Area Transit is down 8 percent for the first three months of the year, a period that coincides with a major redesign of the system after two years of study.

The City Council had hired the firm Nelson Nygaard at a cost of $116,000 to streamline the system in an effort to increase ridership.

“We were warned at the time we made these changes that we could experience a downturn as high as 20 percent,” said John Jones, the CAT manager, in a quarterly appearance before the council on Monday.

While ridership was down on most routes, Jones said two of the reconfigured routes saw dramatic increases.

Route 3, which connects the Belmont neighborhood to Southwood in Albemarle County, was up 41 percent. And Route 6, which travels around south-central Charlottesville, was up 40 percent.

Both routes now travel to the Willoughby Shopping Center. That means some riders no longer need to transfer to other buses to get groceries.

“A lot of people avail themselves of that opportunity, whereas before they were going downtown to transfer to other routes,” Jones said. “They don’t have to do that anymore.”

Ridership on Route 7, between downtown and Fashion Square mall, is down 17 percent. The free trolley-style bus is down 13 percent, which Jones said could be in part due to the lack of transfers.

A restructured Route 4 is down 10 percent. Jones said that is because an entire neighborhood has now been claimed by the new Routes 3 and 6.

“Route 9 was changed a lot and that route needs to be examined because it is down almost 45 percent,” Jones said. “Something isn’t working with that one and we’re going to have to look at what’s going on there.”

Route 10, which serves Pantops, is down 27 percent. Jones said its alignment will be revisited.

Route 11, which was launched last summer, has carried about 15,000 passengers since the beginning of the year.

Route 1, which serves PVCC, is up 3 percent.

“There are some bright stops, and overall the plan is working fairly well,” Jones said.

Some of the downturn can be attributed to winter weather.

“People tend to not take discretionary trips [during snowfall],” Jones said, adding that the system was shut down during one of the larger storms.

Jones said there was also a misunderstanding about night routes, which were eliminated as a separate route. Instead, service on the day routes now continues into the evening.

“Somehow or another the message seemed to get out to our riders that we had stopped night service altogether,” Jones said. “It’s starting to come back now.”

Jones also announced a new fare box system that will allow riders to purchase smart cards. The system also will be able to keep better track of how many people use each stop. 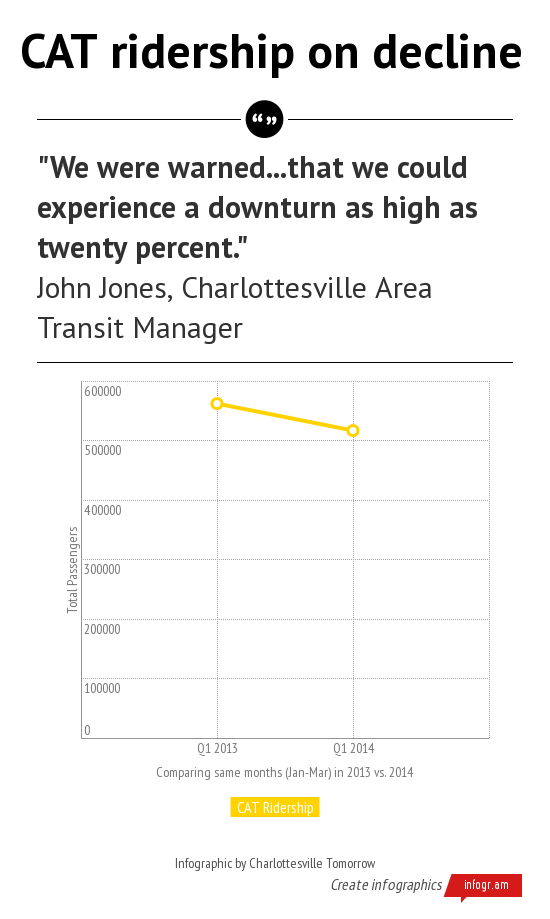