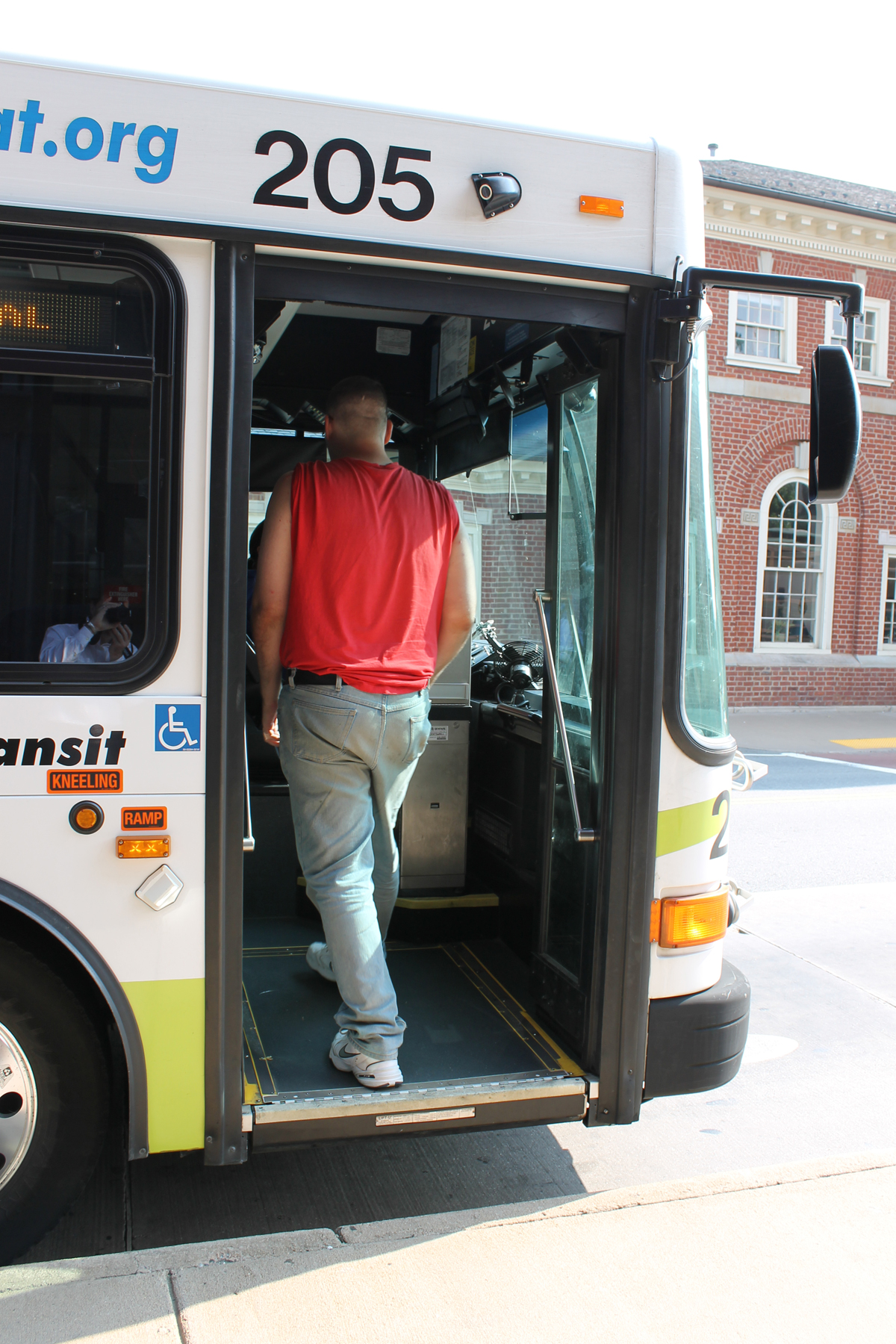 The head of Charlottesville Area Transit is hoping a new fare box system will attract more passengers by making it easier to pay for rides.

“We can only take cash, we can’t issue tickets and we can’t read any of the other fare-reading mediums that are out there,” said John Jones, manager of CAT.

However, that will change in about nine months when CAT installs new equipment from British Columbia-based Fare Logistics. The city has agreed to spend $558,000 to purchase a new system from the firm, replacing old fare boxes that have been in place since 1998.

“The technology is old, and the mechanical portions of it are getting worn out,” Jones said. “We’re having trouble procuring parts to keep them maintained.”

Under the new system, passengers would be able to pay by touching a fare card to a special pad as they board a bus.

Jones said the new system would allow CAT to issue paper or plastic cards that last for a specific duration or until a customer’s balance runs out.

Right now, if a rider pays for a fare with a $5 bill there is no way to receive change. Beginning next spring, the fare box would dispense a ticket that would include a smart tag that would remember how much money remains on the card.

Riders would be able to pay for passes using debit or credit cards at the Downtown Transit Station, but would not have that ability on the bus because personal information likely would be transferred over less secure wireless networks.

Passengers currently can purchase monthly, three-month or yearly passes. These passes are made of paper and lack flexibility. They also have very finite life spans, Jones said. Under the new system, day passes will be valid for a full 24 hours from their first use, rather than expiring at the end of the calendar day on which they were purchased. Likewise, monthly passes will be valid for 30 days from their first use.

Jones said both the city of Charlottesville and the University of Virginia pay for their employers to ride on CAT buses for free. No large private employer in the area picks up the tab for public transit, but Jones said that might change as the system becomes more sophisticated.

“If there’s a large employer that wants to do that, and wants to buy fare for their employees, we’ll have the means to do that with the new fare system,” Jones said.

Albemarle County Supervisor Brad Sheffield, who works as assistant director of the JAUNT paratransit agency, is taking a wait-and-see approach to the new technology.

“I think it opens up a new realm of possibilities to be flexible, and provide easier access to transit service,” Sheffield said in an email. “But they need to make sure it works as desired and get all of the bugs out of the system before they take new initiatives.”

“JAUNT is exploring upgrading the way it accepts fares,” he said. “[First,] we are in the process of updating our scheduling and dispatching technology, and the in-vehicle system, with a tablet deployment.”

The area’s other bus system — the University Transit Service — does not have fare boxes at all.

“In our reciprocal ridership program with the city, we just open the doors on any of our routes and anyone can board,” said Rebecca White, director of parking and transportation at UVa.

UVa students and employees currently show their IDs to board a CAT bus. White said her staff is working with CAT to determine how the new fare boxes would recognize the IDs. 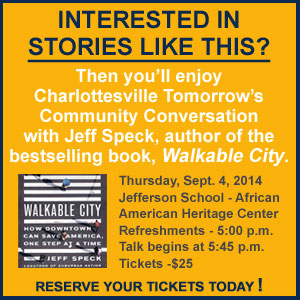 Jones said the new system is not just about making it easier to accept fares. The boxes also would allow CAT to improve its tracking of the number of riders who board at each stop. That information would be used to help plan route changes.

“If we’re picking people up at a stop, chances are it is not going to go away, but I have an idea we will find some stops where we absolutely don’t people pick people up,” Jones said.

The fare boxes also would allow CAT to report more information to state and federal agencies that pay for a majority of operations.

“That will have a more significant impact on our ability to get capital and operating grants based on our performance,” Jones said.

In addition, the information would be helpful to Albemarle County officials as they decide whether to increase their investment in a system that is entirely owned and operated by the city.

“As a county supervisor, I would want to wait to see the accuracy of the data before defining what data I want,” Sheffield said. “It would be helpful to know ridership per stop, per time-of-day. It will also be good to see who pays cash and who uses the new smart cards.”

CAT underwent a major route change at the beginning of the year.

“Some of that is due to the route changes,” Jones said. “February and March were particularly bad this year because the weather was so bad and people just weren’t getting out.”

To try to remedy the situation, Jones said several bus lines will have their lines altered again beginning on Aug. 16.

CAT will restore service to Monticello Road on Route 1. Route 10 to Pantops will run all evening with a final bus leaving Martha Jefferson Hospital at 10:50 p.m. The latter change is made possible because of additional funding from Albemarle County. 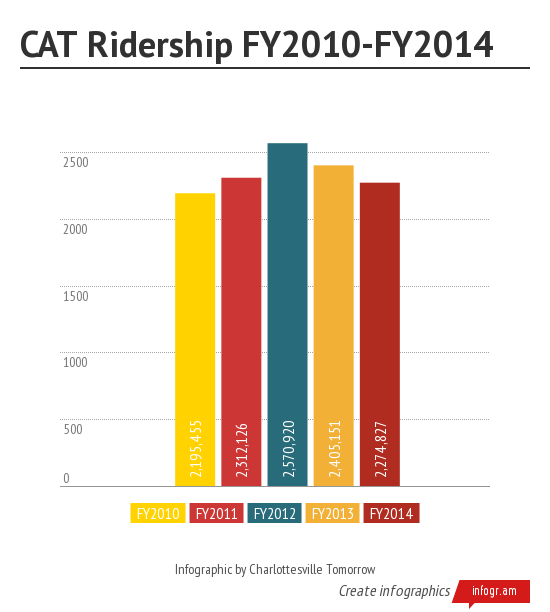