Cavion hopes to grow and inspire with venture capital success 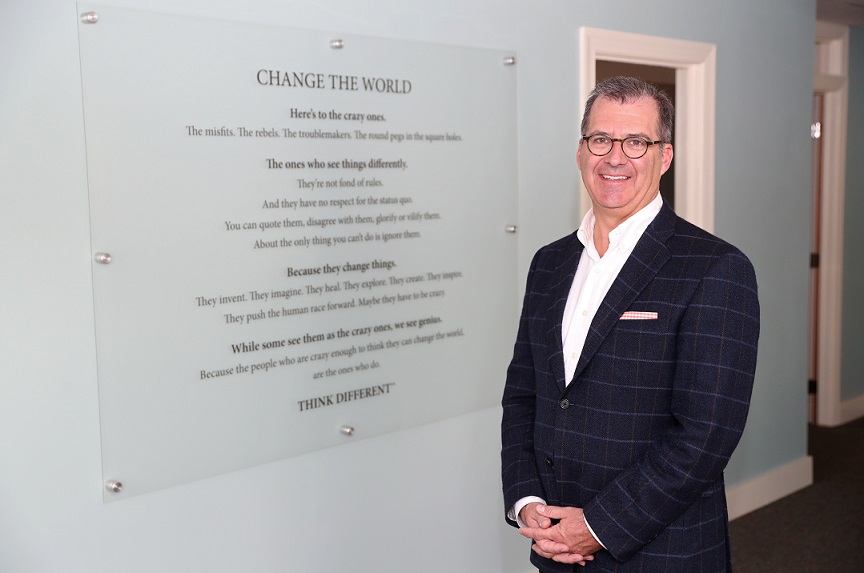 Cavion, a Charlottesville biopharmaceutical company, sent shockwaves through Virginia’s startup scene with a recent announcement that it had raised $26.1 million in Series A venture investment.

Andrew Krouse, president and CEO of the company, said securing the funding will help Cavion to achieve a more important goal.

“We want to help people living with terrible cancers and debilitating diseases,” Krouse said. “We started the company because we had a huge desire to help these people.”

The company is licensing new uses for approved drugs and developing original chemical compounds to treat brain cancer and a variety of neurological diseases. The company’s name is inspired by the Cav3 calcium channel, a protein that is central to the growth of cancer cells and to communication between neurons.

“I try to bring together all of the people who are interested in this one protein,” Krouse said. “They read all of the papers, and know everything that is going on in this field.”

Cavion grew out of Tau Pharmaceuticals, a company that Krouse co-founded in 2005 after serving as vice president of the University of Virginia Darden School Foundation.

The other founders, Dr. Lloyd Gray and Timothy Macdonald, are former UVa faculty members whose research focused on the use of Cav3 blockers to treat cancer.

The company as it is today formed in 2014 when Tau merged with Xdynia, a small firm in Cambridge, Massachusetts, that was exploring a different use for Cav3 blockers: preventing and treating neuropathic pain. The merger gave Cavion a unique combination of expertise in neurology and oncology.

Cavion’s licensed treatments and compounds are in various stages of clinical trials. “We feel pretty optimistic about our prospects of moving forward in the clinic to helping patients,” Krouse said.

Cavion’s Phase 2 clinical trial of a novel brain cancer treatment using mibefradil, a hypertension drug withdrawn from the market in 1998, is nearing completion. The study aims to measure mibefradil’s ability to inhibit tumor growth, and determine a healthy dose for patients.

Dr. Ranjit Bindra of the Yale University Cancer Center is supervising the mibefradil trial. “We have had some very good responses in patients,” Bindra said. “We have had one or two patients with remarkable responses.”

“Cavion has done a lot with a small budget and a dynamic team,” he said. “They are out-of-the-box problem solvers, really determined and driven.”

Krouse said part of Cavion’s recent financing round, led by Lilly Ventures and the Novartis Venture Fund, will be used to support a large-scale Phase 2 clinical trial of a Cav3 blocker to treat essential tremor that is scheduled to begin this year at 10 sites across the country.

Mike Grisham, president and CEO of the Virginia Biosciences Health Research Corp., said Cavion’s Series A funding round, announced in January, was the largest ever for a Virginia life sciences startup. The VBHRC helped Cavion to gain momentum by awarding the company more than $500,000 in grants between 2014 and 2016.

“Andy Krouse and his team have consistently hit the milestones that were laid out in our grant agreements,” Grisham said.

“They have the ingredients for success — high-quality science and strong entrepreneurial management — and they have done a great job of getting capital,” he said.

Cavion does not conduct its own laboratory research, but Grisham said the company has created jobs at Virginia research universities by sponsoring clinical trials.

“Other innovators in the region are going to be more likely to start a business now because they know Charlottesville is a place that can attract capital,” he said.

The Center for Innovative Technology also supported Cavion with equity and grants before its Series A funding round. Albrigo said the center will try to help Cavion continue to get the attention of prominent investors.

“It’s something we have to be diligent about,” Albrigo said. “We want to make sure they get access to all the capital they need and remain in Virginia.”

Krouse said he hopes to keep Cavion’s business operations in Charlottesville. “I think there’s a very good culture here for creating companies,” he said. “I think there are all kinds of new possibilities.”