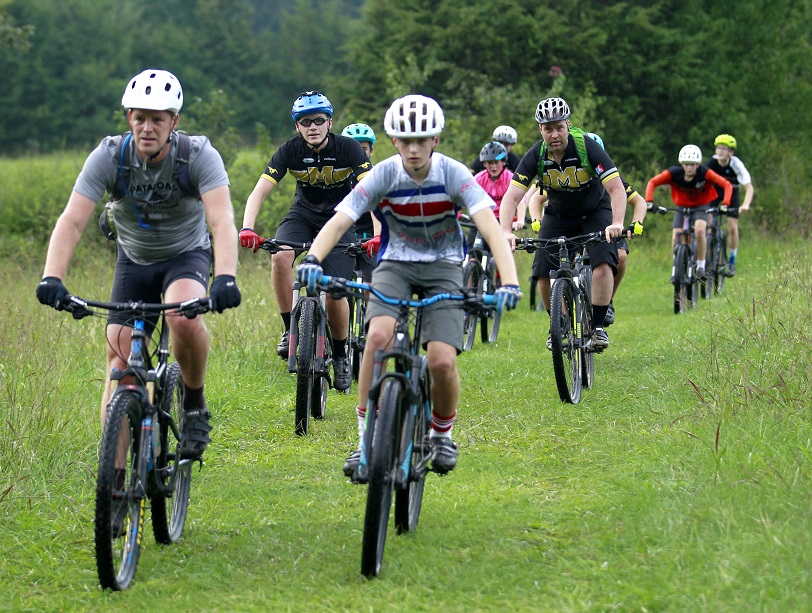 More than 50 students from Albemarle County and Charlottesville's high schools are expected to participate in Virginia Interscholastic Cycling League races this year.

On an unusually cool August evening, a quiet Albemarle County farm was suddenly filled with the clicking and popping of bicycles changing gears, and the excited chatter of two dozen high-schoolers.

“We are celebrating the fact that we made this happen,” said Sam Lindblom, head coach of Monticello High School’s team. “We are psyched to have this much local competition this year.”

In 2015, Monticello became the first public school to join the Virginia Interscholastic Cycling League. Albemarle, Western Albemarle and Charlottesville High schools all joined the league this year. While boys and girls on the four local teams practice together, they will compete in separate events.

Andrea Dvorak, director of the Virginia Interscholastic Cycling League, said Lindblom and Monticello High’s athletic department have been excellent advocates for their program, and for cycling at public high schools in general.

“It’s harder to start things like this at public schools than private schools,” Dvorak said. “It was huge for the league when Monticello joined. Today you can see the result of their commitment and their efforts.”

“NICA takes an inherently dangerous sport and makes it safe,” said Dvorak. “We make mountain biking accessible to everyone, from the rider who wants to go professional … to the one who shows up to the first practice wearing a hockey helmet.”

“[Hufnagel] did a lot of the legwork to create a league and get an insurance policy,” said Monticello assistant coach Chris Little. “Without him doing that work, we wouldn’t be able to do what we have done at the public schools.”

Monticello junior Alex Thorne joined the school’s mountain biking team in its first season. “For me, all of this started with Coach [Lindblom] showing up in the cafeteria one day with a table and a bike,” Thorne said.

“That first season was successful, but kind of hectic,” said Lindblom’s son, Caden, also in his junior year at Monticello. “We had no role model to look towards, and it was hard to get real work done. We’ve got it locked down at this point, though.”

Monticello’s team has grown to 17 riders this year. Albemarle and Western Albemarle will have about 15 riders in their first years, while Charlottesville High School hopes to field a team of eight.

The teams vary the locations of their twice-weekly practices. Sometimes they ride on Albemarle’s multi-use trails at Walnut Creek Park and Preddy Creek Trail Park. Carter Mountain, Observatory Hill and the Rivanna Trail are among the best practice locations closer to town.

On Wednesday, about 30 cyclists and coaches from the four schools went for a one-hour practice ride at Tevendale Farm near Earlysville. The property is owned by the family of Shawn Tevendale, founder of Blue Ridge Cyclery, which sponsors all four teams.

Tevendale said he opens his trails to youth teams on a weekly basis to help keep them from overwhelming the area’s public trail systems.

“It provides some level of security for the kids,” he said. “They don’t have to worry about user conflicts with horse riders, hikers or birdwatchers. They are able to ride at a faster pace … on trails that are built specifically for this purpose.”

Tevendale said the bikes he sells to high school riders usually cost between $800 and $1,200.

“It’s an equipment-intensive sport, and there’s certainly a price barrier to entry,” he said. “But it’s doable, and the expense is comparable to other sports that high schools offer.”

Wednesday’s joint practice at Tevendale Farm was optional for the high school teams, and the atmosphere was relaxed; some riders paused their pedaling to look at deer and giant puffball mushrooms along the trail.

“That’s another reason why we’re here,” Little said. “Mountain biking exposes kids to the outdoors and the environment.”

Little added that the Monticello team has helped to maintain local trails and has built new trails near Walton Middle School.

Cor Carelsen, owner of the Crozet Bicycle Shop, said he hopes to see Henley Middle School form a team to introduce Crozet youth to mountain biking at a younger age. “The younger kids are when they start, the easier it is for them to compete as they get older,” he said.

Carelsen, whose shop sponsors the Western Albemarle team, said European countries have outperformed the United States at international mountain biking competitions for many years thanks to their robust youth development programs for cycling.

“There are no reasons why Americans shouldn’t be on those podiums,” he said. “America has all the infrastructure, everything you need to be really competitive.”

Students who do not have a team at their school are eligible to compete for the Charlottesville Racing Club’s Junior Mountain Biking Team, also sponsored by the Blue Ridge Cyclery. The team is open to boys and girls ages 8 through 18.

Gavin Breen, a freshman on the Western Albemarle team, practiced with the Charlottesville Racing Club in middle school. He said he likes the adrenaline rush from racing down mountains and the “positive vibe” of his new team.

“Experienced riders here are sharing their knowledge and experience, and growing this sport,” she said. “They are some of the most friendly and nurturing people I have ever met.”

The Miller School will host the first race of the Virginia Interscholastic Cycling League’s fall season on Sunday.