Amid chants, a group of area youth gathered at the Charlottesville Free Speech Wall at noon Friday to take part in the Global Youth Strike for Climate Change.

The local rally was organized by two students, Gudrun Campbell, a sixth grader at Walker Upper Elementary School in Charlottesville, and Ezra Laiacona, a fifth grader at Agnor-Hurt Elementary School in Albemarle County. Concurrent protests took place across the state — in Richmond, Harrisonburg, Fredericksburg and Williamsburg — and around the world.

“I’m organizing the [local] climate strike because if others will not protect our futures, then we will,” Gudrun said. “I think politicians aren’t doing much about climate change because they know their futures are secure.”

Friday’s global protest was the largest coordinated effort to date, inspired by the work of 16-year-old Swedish climate change activist, Greta Thunberg. In August, Thunberg began weekly protests outside of the Swedish Parliament to agitate for action on climate change, which sparked the worldwide youth movement.

Thousands of students from more 100 countries joined in Friday’s effort, stating that their governments have failed future generations by not cutting emissions and curbing global warming.

Charlottesville organizers said they were expecting about 50 people and were pleasantly surprised when a crowd of about 200 gathered. Several partners supported the local protest: Indivisible Charlottesville, Charlottesville Families in Action, Charlottesville Democratic Socialists of America, Together Cville and the Sunrise Movement.

“I think the main thing that I learned was that people care,” Gudrun said. People show up to protect what they believe in.”

On the Downtown Mall, the wind picked up and rain clouds threatened, sprinkling a few drops on those gathered as the protest opened. Undeterred, Gudrun took the mic and began with a moment of silence for the victims of the mass shooting earlier that day that killed nearly 50 people at two New Zealand mosques.

Reading from prepared notes, Gudrun recited a list of actionable demands amid cheers of support and encouragement.

“For years, we’ve known the threat that climate change presents,” she said. “For years, there has been no change and no solution. There are only 11 years left to save our planet. We will not sit here and watch.”

“We have waited long enough. We will wait no longer. Waiting has gotten us where we are today,” Gudrun continued as the crowd erupted in agreement.

Students held signs with slogans such as “People not profits,” “Make the world a better place,” “Do not trespass on my grandkids’ home” and “There is no Planet B.” Youth in attendance ranged in age from 7 to 17, with additional adults and four-legged friends who also lent their voices.

Gudrun recited the list of actions that the students felt were needed immediately to stop climate change. These included support of the Green New Deal, sponsored by freshman Rep. Alexandria Ocasio-Cortez, D-New York, and Sen. Ed Markey, D-Massachusetts; changes in the agricultural industry to reduce carbon emissions; and science-backed programs to extract carbon from the atmosphere, as well as new emissions standards.

Focusing on what could be done here in Charlottesville and Albemarle, the group demanded a halt to the development of the Atlantic Coast Pipeline compressor station in the community of Union Hill in Buckingham County and the Mountain Valley Pipeline. Continued reliance on carbon-producing fossil fuels and a disproportionate burden on marginalized communities makes these projects problematic in multiple ways, the said. Union Hill is a community founded by free African-Americans and emancipated slaves.

“We declare a national emergency on climate change,” Gudrun shouted, as the crowd cheered. After calling for comprehensive education on climate change for grades K-8 and a pledge to preserve public land and wildlife, Gudrun opened the mic to others who wished to speak. 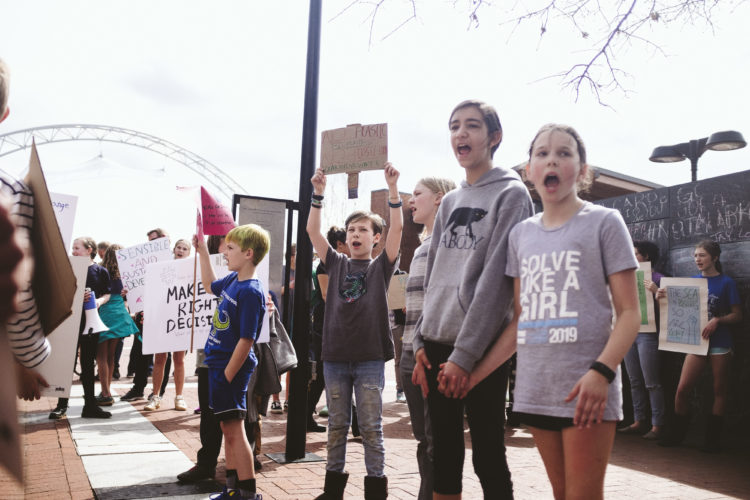 Student protesters chanted and held signs during a Friday demonstration against inaction over climate change.

Amid cheers and encouragement, another child spoke.

“There are no second chances for our world,” he said. “We can’t do this alone. We need the entire country behind us. We have to convince our leaders to change our ways now.”

Desi, a sixth-grader, told the crowd, “How can we be what we want to be when we grow up, if we can’t take care of our planet?”

Ezra, the co-organizer, then said, “If we don’t have change now, there is no future. And we want a future.”

A high-schooler took the mic to commend the activism by elementary and middle school students.

“I’m 17, and I’m one of the old people. Thanks to all the young people getting involved,” she said.

“We are counting on grownups to make better decisions about our future,” a Burnley-Moran fourth-grader said.

Ezra then led the crowd in some chants. “Hey, hey, ho, ho; climate change has gotta go!” proved the most popular, turning into singing and harmonizing and many repetitions. Referencing the Christmas Day of Action organized by young people in the United Kingdom with the slogan “All we want for Christmas … is Climate Action!”, Ezra added, “Anti-Climate Change Santa likes our chant.”

The group then hoisted their signs and marched and chanted several times around the Downtown Mall, with a core group remaining for more than an hour.

As they passed, not every adult on the mall was on board.

“I wonder how many cars were driven to get them down here today instead of being in school where they should be,” one passerby said to another.