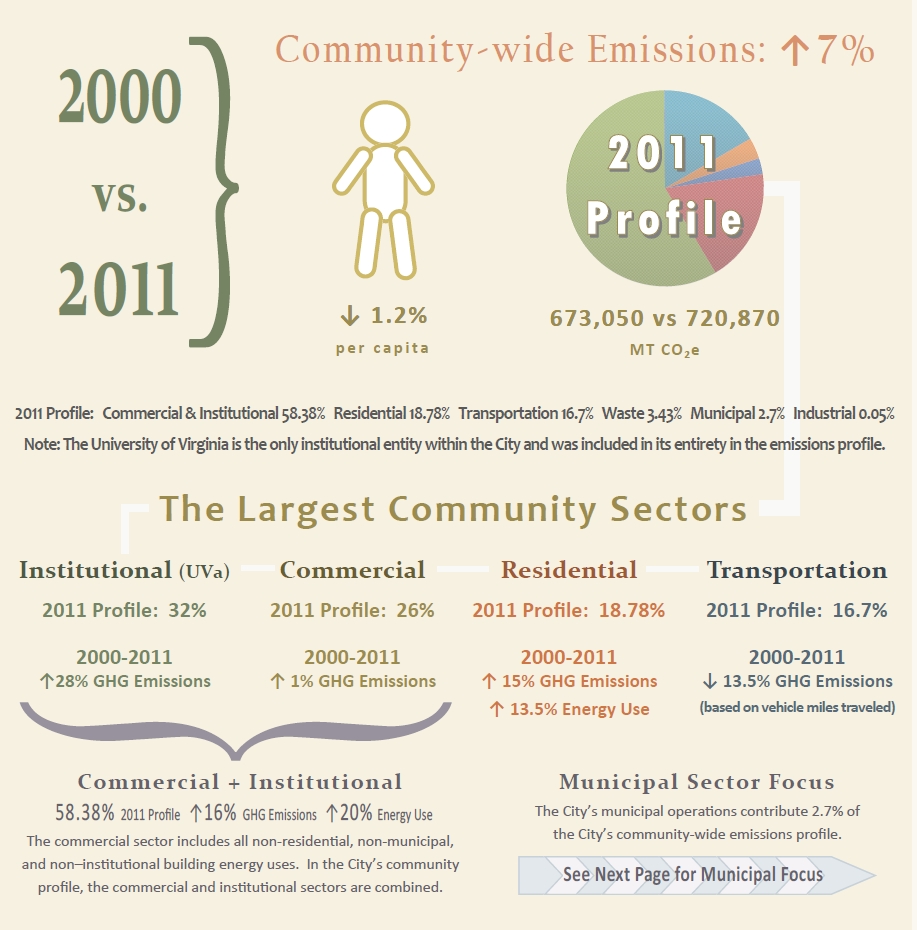 As the Charlottesville region seeks to increase the inventory of affordable housing units, members of the city’s emerging green-energy sector see an opportunity to reduce area greenhouse gases while lowering utility costs.

“Historically, when it comes to clean-energy programs and investments, communities of color and low-income communities have not been the beneficiaries of that,” said Charity Pennock, director of the Charlottesville Renewable Energy Alliance.

“Having that at our forefront through the whole process is going to make sure that at the end, everyone in our community is benefiting,” she said.

Pennock appeared at a panel discussion at the Tom Tom Founders Summit on Friday that put the spotlight on the community’s efforts to address climate change.

Bellamy said the city has made some progress, such as refits of municipal buildings to increase energy efficiency.

“That contributed to an 18 percent decrease in emissions in the span of a decade from 2000 to 2011,” Bellamy said. “We’re actively reviewing the next round of opportunities.”

The Charlottesville Renewable Energy Alliance includes firms such as Apex Clean Energy and Sigora Solar. According to its website, the group seeks to “establish Charlottesville as the renewable energy hub of the Southeast.”

“Our companies are excited about what the city is doing related to the Compact with Mayors,” Pennock said. “This is a process by which the city will have a greenhouse gas inventory. They’ll have a set of targets and will create a plan. All of this creates an opportunity for us to bring forth our resources.”

The leader of a new organization that helps businesses make the transition to alternative energy sources said that it will take more than government action to reduce the community’s overall carbon footprint.

McLean said there are groups in the community that have already been at work to help reduce energy usage.

“Locally, we have LEAP, who is working on energy efficiency in our homes and businesses,” McLean said. “We have lots of folks who are focused on your personal energy use and why it makes sense today to make that transition.”

Bellamy credits LEAP for reaching out to diverse communities.

“I grew up in public housing and we didn’t hear or learn a lot about energy,” Bellamy said. “I really appreciate the work that LEAP has been doing.”

Bellamy also serves on the board of directors of the Charlottesville Redevelopment and Housing Authority. When that agency is ready to build units and replace existing ones, Bellamy wants energy efficiency to be part of the plan.

“We have to figure out how we can have everyone at the table,” Bellamy said. “Just as we would have a developer or an architect, it would probably be just as important for us to have someone that is extremely knowledgeable in terms of energy efficiency.”

Del. David J. Toscano, D-Charlottesville, the event’s moderator, suggested that a portion of the funding the city receives from Albemarle County through the revenue-sharing agreement could be put into a dedicated fund to help the local Habitat for Humanity.

“Why shouldn’t we take some of that revenue-sharing money, put it into Southwood to help build affordable housing that is energy efficient?” Toscano asked.

Bellamy said he didn’t think that was a good idea because the money is already being used for other purposes. He said Charlottesville residents would be furious if it were diverted to Albemarle County, which is where Southwood is located.

McLean said Charlottesville has a lot of work to do.

“The reality is that this town is not as green as it thinks it is,” he said to applause. “I’ve been getting in trouble pointing this out to some folks, but we do have goals. The city government has been doing a very good job with its own operation. But there is more work that can be done.”

The Charlottesville Climate Collaborative will launch its Better Business Challenge on May 8. The event will be the third round of an initiative designed to encourage companies to reduce their environmental footprint.

In 2014, Plow & Hearth participated in the challenge and installed new lights at its corporate headquarters. That resulted in reducing lighting costs by $93,000 a year, according to the collaborative’s website.