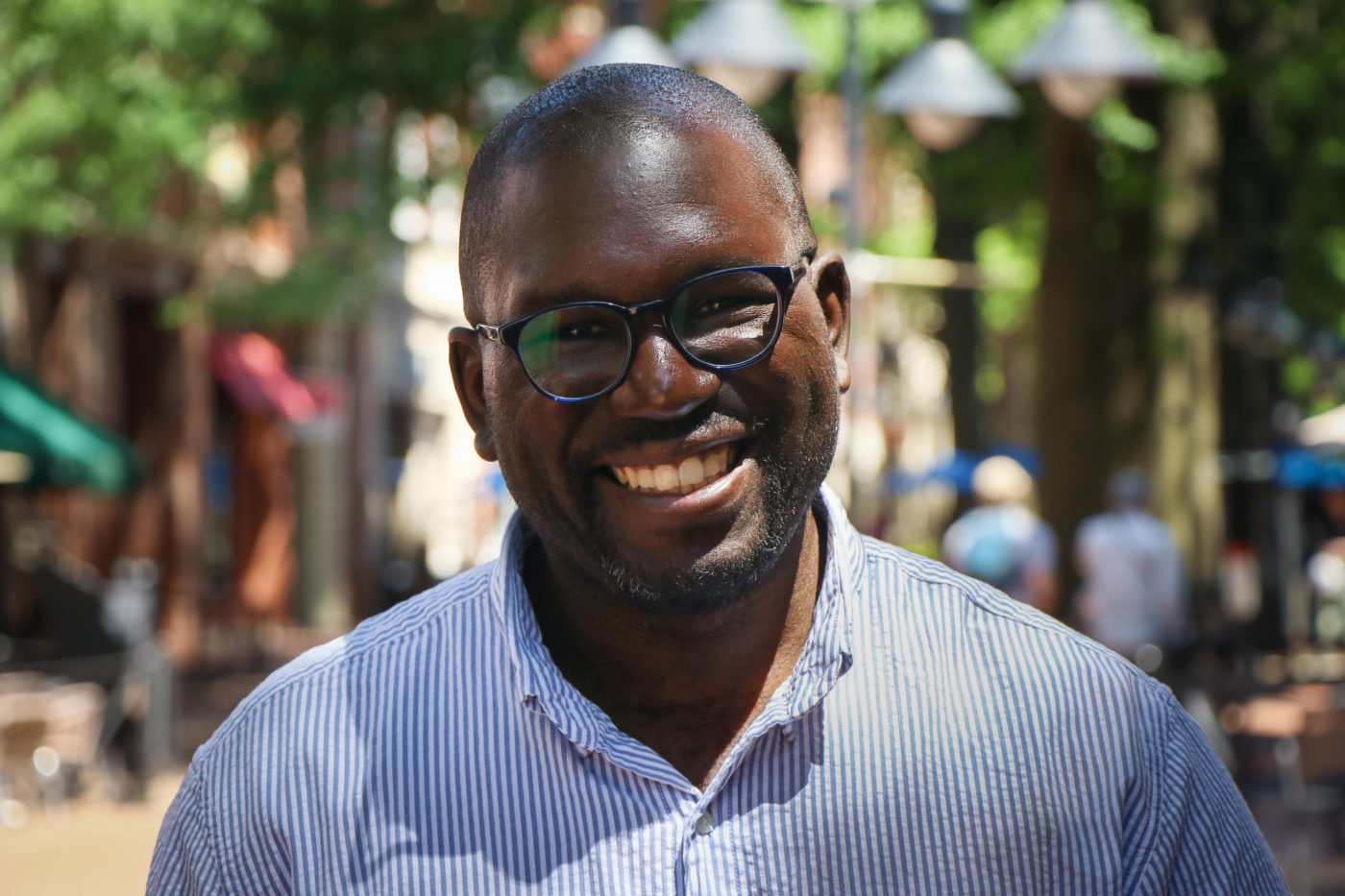 Though the Virginia resident and University of Virginia alumnus spent several years in Washington D.C. as a political reporter, it’s Charlottesville that he returned to with his wife and where they had their children. It’s Charlottesville where he composes his columns for the Times, reflecting on national politics with a historical lens.

“When people think of news, they tend to just think of new things happening now. But I think you can also take the perspective that history can be a new thing,” Bouie said during an exclusive interview with Charlottesville Tomorrow. “You can use the tools of journalism, take a journalist’s eye toward historical events and use them to inform how people understand the present.”

Bouie’s columns have headlines like “If it’s not Jim Crow, what is it?” — an exploration of Georgia’s new voting restrictions with the context of an era ripe with laws that disenfranchised people of color — and “There’s a reason the election of 1800 still sings out to us” — recalling a fractious period in early American history along with the contentious election where Charlotesville’s Thomas Jefferson became president.

“There’s a lot of history that a lot of people don’t know for totally innocent or innocuous reasons and a journalists’ job is to recover information,” Bouie said. “This is like a source of information that can be uncovered. Taking that approach and thinking of the job in terms of revealing old facts to people has been really useful.”

As for Bouie’s own personal history, he graduated from UVA in 2009 where he studied Political and Social Thought and Government. Though he didn’t originally know he wanted to go into journalism or column writing, he eventually worked fellowships at The Nation magazine and The American Prospect before becoming a staff writer at The Daily Beast. He went on to become a chief political reporter at Slate, where he often wrote about the intersection of history and race with the present and politics. Now, in addition to writing his Times column, he is an analyst for CBS News.

Politics fascinated Bouie long before he transformed that interest into a profession.

“I can’t remember a time when I didn’t find politics, government and civil affairs pretty interesting,” he explained. “I can’t say I pursued [journalism]. I kind of fell into it by happenstance and opportunity.”

While in college, Bouie wrote a blog that eventually segued to freelance writing before he applied for writing fellowships. Soon, he realized that journalism fit well with his interests.

“Now I can’t imagine what I would do if I weren’t writing,” he said.

Aside from his works that connect or contextualize the past to the present, Bouie’s writing also offers a view into the future.

A Slate article following the 2018 midterm elections titled “Trump thinks legitimate elections are ‘voter fraud’” resonates following challenges to the 2020 presidential election that saw months of litigation by the former president and his team in denial of the results.

In that piece and now, Bouie argues that while it would have been easy to attribute the voter integrity debate simply to Trump, the issue has been building for the past two decades. Such was the case with the 2000 election between President George Bush and Al Gore, which included litigation, recounts, and a riot at a Florida polling location.

Election integrity has seeped into Virginia’s current state elections with Republican gubernatorial candidate Glenn Youngkin making it a part of his campaign and former Democratic attorney general candidate Jay Jones proposing an Election Integrity Unit as part of his office.

Noticing emerging trends or issues along with continuously learning more about history means Bouie is not too surprised when something becomes an of-the-moment issue for politicians to focus on.

For example, he said he’s not surprised by the sudden opposition to Critical Race Theory, which is not as new or defined as exactly what some of its opponents tout it as.

Taught at the collegiate level, critical race theory explores racism as a social construct intrinsic to legal systems and policies. According to the American Bar Association, foundational questions and explorations that underlie the theory include how law constructs race, how law has upheld racial hierarchies, how law has reproduced racial inequality, and “how can the law be used to dismantle race, racism, and racial inequality?”

The academic framework also first emerged about 40 years ago.

“It’s funny to me that more or less an obscure branch of legal studies has become a sort of catch all for this,” Bouie said.

Still, he says the conflation and opposition runs deeper than current politics or race.

For instance, he noted, when Charlottesville was resisting school integration in the late 1950s, it coincided with Virginia’s introduction of textbooks that downplayed racism, the Civil War and slavery.

Citing more local history, he said it’s not coincidence that the low-income population in Charlottesville is disproportionately Black. Examining how things came to be as they are, he said, is not an examination some want to pursue.

“I think the push back is…you’re saying that this kind of disadvantage isn’t just a result of individual choices and on the flip side, inherited advantages aren’t simply the result of one’s hard work and perseverance,” Bouie said. “None of us can escape history, we all live within it. It doesn’t dictate our futures, but it is something that we can’t rip ourselves out of. Setting aside the racial stuff, I think that’s an idea Americans are very resistant to.”

In reflecting on the current state of politics this election year, Bouie pointed to the recent history of the Democrat and Republican parties within the state.

Democrats are occupying a majority in the General Assembly and eight years in the governor’s office. That said, he observed how the party has worked to encompass its “moderate suburban part” with its “left flank” of more left-leaning officials and constituents.

He noted that some liberal or progressive policies that were unsuccessful a few years ago are now state law. Bouie also said gubernatorial candidate Terry McAuliffe’s campaign is now much more liberal than when he was elected to the executive position the first time. As McAuliffe promotes his policy-heavy platform, it builds on the progressive direction his party has managed to take in recent years.

Bouie also referenced the “identity crisis” the Republican party is having as it contends with Trump “remaining the sun things revolve around.”

“We have lots of lawmakers in [the General Assembly] who are more similar to Bob Good than they are to [former GOP governor] Bob McDonnell,” Bouie said.

Good’s 2020 congressional campaign, which mirrored Trump policies and goals, attracted some of his voter base. He called himself a “bright-red conservative.”

As Republican gubernatorial candidate Youngkin emerged victorious from a May convention — rather than a primary — where one of his many opponents included self-proclaimed “Trump in Heels” state senator Amanda Chase(R- Chesterfield), Bouie says in the general elections Republican candidates will have to contend with the right flank of their party while also courting moderates.

In looking locally, Bouie says he’ll keep a critical eye on land use in Charlottesville, adding that “it will dominate local politics for the next few years.”

As the comprehensive plan is currently undergoing an update, coupled with an affordable housing strategy and eventual zoning rewrite, the process has highlighted growing pains in the community, controversy, and some uncertainty about what changes will mean for everyone.

Bouie suspects that land use and housing will remain at the forefront of local political conversations as Charlottesville “tries to grapple with the fact that it is no longer a small quaint little town.”

From his perspective as a homeowner in the city, he says he doesn’t believe that increased density will inevitably “attract massive apartment buildings,” and added that he is “baffled by this idea that there’s anything to be afraid of here.”

A current draft of the city’s comprehensive plan and future land use map indicate various density increases that specifically limit how much more dense an area can become.

“There will be hard decisions to make and as we want to make the city affordable then we have to work toward that in our policy writing,” he said.

With two seats up for elections on Charlottesville’s city council, residents will choose between Juandiego Wade and Brian Pinkston — the two democrats that emerged victorious from the June 8 primary — and two independents, which include first time candidate Yas Washington and incumbent mayor, Nikuyah Walker.

As the comprehensive plan is in the works and a future zoning rewrite will be underway, whoever wins in the general election will have a significant legislative role in physically shaping Charlottesville’s future.

In the meantime, Bouie will continue to keep watch of emerging issues and trends, always reflecting on how the past informs the present and, most likely, the future.