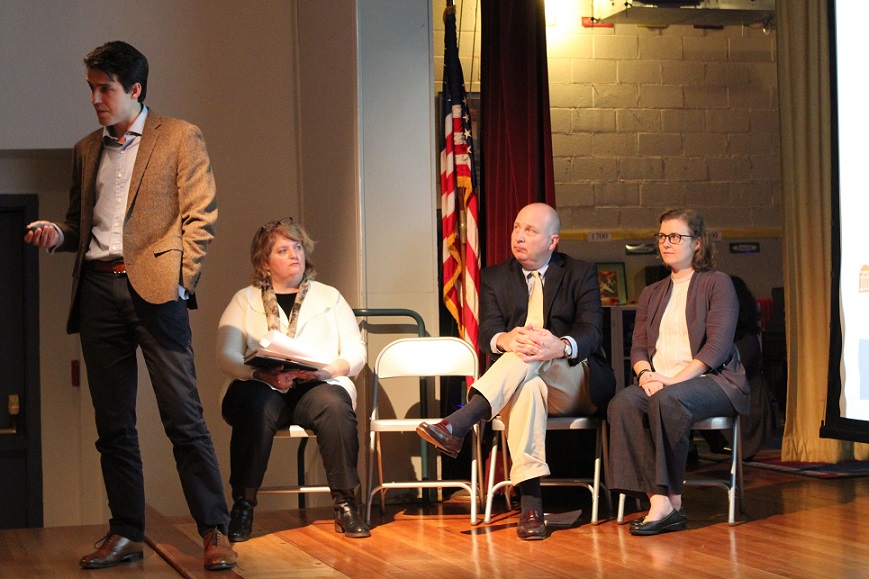 Hamilton Lombard (left), a research specialist at the Weldon Cooper Center for Public Service at the University of Virginia, shared population projections at a community meeting on Charlottesville’s school facility needs.

Charlottesville City Schools hosted a community meeting Monday at Venable Elementary to get public input on two options to accommodate the division’s growing enrollment over the next decade.

“The more voices we hear, the better we are going to feel at the end [of the process], regardless of what decisions are made,” said Superintendent Rosa Atkins.

The school division contracted this year with VMDO Architects to calculate the enrollment capacities of each of its schools, evaluate growth projections and provide recommendations to address facility needs. VMDO was paid about $60,000 for the study, which was funded through the city’s Capital Improvement Program.

This summer, Charlottesville spent about $73,000 on a modular classroom with an adjoining bathroom at Greenbrier Elementary, and another $25,000 to convert annexed office space at Venable Elementary to a science lab.

Charlottesville’s elementary school pre-K through 12th grade enrollment grew by an average of 3 percent per year between 2011 and 2016, adding about 400 students during that period. Maria Bninsky, an architect with VMDO, said it was extremely unlikely that the 3 percent rate of growth will continue as a long-term trend.

The VMDO’s estimates of future enrollment are based on the division’s median cohort growth rate from 2011-17, which takes into account the attrition and addition of students from one grade to the next. Enrollment for the 2026-27 school year was projected at 5,190, up from 4,451 in the 2016-17 school year.

VMDO projected enrollment at Walker Upper Elementary to exceed its maximum capacity under state regulations by 2019. Buford is projected to reach the same benchmark by 2021.

“That’s not to say that school buildings wear out,” said Ken Thacker, principal at VMDO. “All of these schools are well-maintained. They have ‘good bones.’ We think the circumstances are right to make some adjustments to solve some of these problems.”

Solutions currently favored by the School Board include establishing a centralized preschool facility, expanding Buford Middle School to include sixth-grade students and moving fifth grade back to Charlottesville’s elementary schools.

According to VMDO, Charlottesville also would have to build a new elementary school or construct large additions at three elementary schools to meet capacity needs. The firm identified Burnley-Moran, Jackson-Via and Johnson as the schools that would best lend themselves to further expansion.

Completing these projects would have a total cost of $95 million to $140 million, according to cost estimates provided to VMDO by a third-party contractor.

Thacker said building a new elementary school would cost Charlottesville $20 million to $25 million, while the total costs of the dispersed additions would be $30 million to $40 million. “The economies of scale are greater when you have fewer projects going on at once,” Thacker said.

VMDO identified the southern portion of the Walker Upper Elementary campus as a potential site for a new elementary school.

Thacker said the new elementary school could draw students from all existing districts, whether through a seventh school zone or through magnet status.

Proposed additions and renovations at Buford, estimated at $45 to $60 million, would nearly double its capacity, bringing it to about 1,050 students.

Charlottesville students currently attend Walker for fifth and sixth grade before going to Buford. If Buford were to host sixth grade, the Walker building would likely be repurposed to host preschool classrooms and administrative offices for the school division.

VMDO and division staff have estimated that moving sixth grade to Buford could save $1.2 million annually in staffing and operational costs.

“If you’re saving in one area, that just opens up multiple opportunities for you to redirect those funds at some point, without incurring additional costs,” Atkins said.

Atkins said the School Board is engaging in conversations to potentially acquire new property for future school buildings. She said acquiring Burley Middle School — an Albemarle County school located within city limits— was a tantalizing but unlikely option.

‘We would love to have that property,” Atkins said. “We would offer twice as much as what the county paid for it.”

“This is an opportunity to create a special place that’s designed for the next generation of learners,” Thacker said.

VMDO estimated the preschool facility would cost $15 million to $20 million.

Ariel Billmeier, mother of a Venable student, asked if Charlottesville could solve some of its capacity problems by eliminating its nonresident student program.

This year, 294 students living outside of Charlottesville are paying tuition to attend the city’s schools. About 30 percent of these students have parents employed by Charlottesville City Schools or the city government.

Assistant Superintendent Kim Powell said only two out of 131 elementary homerooms in Charlottesville might have been eliminated if tuition-paying nonresidents were removed. “We evaluate it every year, and we make sure that the students who come in are filling available seats,” she said.

Powell added that tuition from the nonresident student program generates over $1 million in net revenue for the city schools each year.

Atkins said that research has shown that having fewer transitions between schools can result in better educational outcomes for middle school students and increased parental engagement.

“Our model is not something you see often throughout the commonwealth,” Atkins said.